JACK FORTUNE AND THE SEARCH FOR THE HIDDEN VALLEY by Sue Purkiss: Review by Penny Dolan

With the gardens full of rhododendrons and exotic blooms, today seemed a good month to re-post this review of History Girl Sue Purkiss's plant-hunting adventure for junior/middle-grade readers.

How does one start to hunt for plants? My own love of plants began with Cecily Mary Barker’s picture-and-verse Flower Fairy books, Yet the works are not pure fantasy: Barker’s charming fairies, first appearing in 1923, were based on drawings of real children in her sister’s kindergarten, while the detailed flowers and settings are painted with meticulous, botanically-accurate skill. The Flower Fairies taught me- and no doubt many others – to find and identify common plants, even though some of those flowers are rarer than they used to be.


However, Barker’s pretty fairies - still hovering around today – can surely only charm a very particular young audience. There’s space for bolder books about the history of the plants and stories for older boys and girls who would welcome tales of adventure. 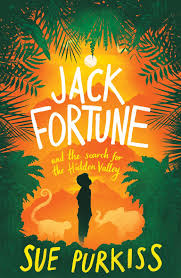 Email ThisBlogThis!Share to TwitterShare to FacebookShare to Pinterest
Labels: Penny Dolan; Sue Purkiss; Jack Fortune and the Search for the Hidden Valley

Thanks for this lovely review, Penny!