'In And Out The Dusty Bluebells' by Karen Maitland 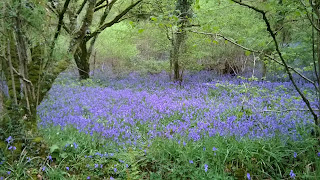 In the last few weeks, people have been flocking to see the wonderful bluebell woods in Devon, where the carpet of flowers spreads beneath the trees like a violet-blue mist. I heard one visitor say, the bluebell wood was ‘an enchanting place’. They thought so too in the Middle Ages, but unlike the 21st century visitor, they did not mean it was beautiful, they regarded bluebell woods as places of sinister and dangerous bewitchment.

Bluebells were harvested as early in the Bronze Age, for the gluey sap which was used to fixed feathers to arrow shafts. During the Tudor period, bluebell sap was used as starch to stiffen muslin and the immense ruffs worn by the Elizabethans. It was used as a glue in bookbinding, because the poisonous sap also discouraged insects from attacking the books. In the Middle Ages, bluebells were thought to be a cure for leprosy, consumption, snake bites and spider bites. Bluebells could prevent nightmares if the flowers were threaded and hung over the bed. But whatever you needed bluebells for, you never went to collect them alone.

A child who picked bluebells alone would be spirited away by the fairy folk, never to be seen again. Even an adult who ventured into a bluebell wood by themselves was in mortal danger. They would be pixie-led, and forced to wander round and round, unable to find their way out, until they died of exhaustion, unless someone else entered the wood, thereby breaking the enchantment, and guided the bewildered victim home. Bluebells were known as Deadmen’s bells, because whoever hears them ringing, is listening to their own death knell and will be taken by a malicious spirit within weeks.

The much-loved children’s author, Beatrix Potter, makes great use of these old superstitions in her only full-length novel for older children The Fairy Caravan (1929). In the novel, the circus characters have to travel through a small bluebell wood, Pringle Wood, and are warned not to eat anything they find there because they will never leave if they do. Even though most heed the warning, they still find themselves going round in circles for hours, until the pony pulling the caravan almost collapses with exhaustion. The pig, who naturally disobeys the injunction, is trapped in a hollow tree by his own hallucinations and is only finally rescued by the pony who protects himself with fern seed plaited in his mane, which was a amulet that medieval travellers used to render themselves and their horses invisible to evil spirits. The pony also asks the blacksmith to reverse his horseshoes. Again, people thought that by reversing your clothes and wearing a garment inside out you could break enchantment or a run of bad luck.
Bluebells are highly poisonous, and when not in flower the bulbs can be easily mistaken for ramsons or wild garlic, which often grows in the same habitat, so the warning that you might never leave the bluebell wood if you ate anything there was probably sound advice.

Whenever I see a bluebell wood, I am reminded me of a circle game we used to play as children in the sixties.

In some versions, they are called ‘dusky’ bluebells or ‘Scottish’ bluebells. There is much speculation about the age of this song. Some say that it refers to the hiring fairs that took place around April-May, but a group of country children in the 1900’s reported that ‘the master’ in the song was the sinister Fairy King, who like the pied piper, would lead unwary children dancing into the underworld, from which there was no return. This is probably not, of course, the original meaning of the game, but it is interesting that Edwardian children were still aware of the ancient superstition. 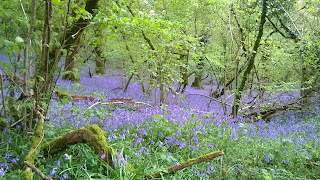 Other common beliefs were that if you placed a garland of bluebells on someone you wanted to question, they would be compelled to tell the truth. Perhaps the sweetest one is if you manage to turn one of the flowers inside out without tearing it, you will eventually win the one you love. Again, it is the act of physically reversing an object, which turns or reverse your fortune. The task also requires patience and gentleness, two qualities which might well help a young lad or lass win the heart of any future lover. Either that, or it took so long to master the art, you might well have stopped fancying the person by then, which solved the problem.

Lovely blog -- and a timely reminder to get out to the Clent Hills, where the bluebells cover the hillsides for miles.

That was a beautiful post. I must look for fern seeds to weave or carry about as one can't be too careful and I sometimes feel I need a bit of luck-turning.

That must be glorious sight, Sue.

Supposedly the fern seed was most effective if gathered just before midnight on Midsummer's night Eve, but being dangerous to touch with your bare hands at that hour you were advised to collected it with a forked hazel stick and let it fall onto a white cloth. But the fairy folk and evil spirits would try to stop you by appearing in such terrifying guises that people died of fright. So maybe you'd be safer, wearing your socks inside out instead, Abigail.

The Clents at bluebell time are glorious. A great stretch of sky-blue where they're in full sunlight; deep indigos and violets where they're in shadow under the trees. The trunks of ancient trees grown around thickly with bluebells and the breeze carrying their hyacinth scent.

I'll remember to turn my socks inside out.

The version I played at school in the 90s had the same first verse but the second went:

The person tapped on the shoulder became the leader and the line of kids grew until you were down to the last person. Which fits with the idea of all the kids being stolen away?