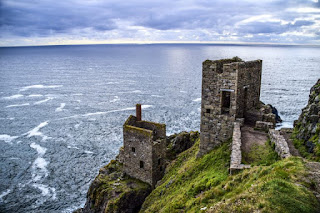 Holidaying in Cornwall last month, I was struck by the two very different faces of the county: the beautiful, cheerful, prosperous coast and the strange ruined melancholy industrial buildings that lie abandoned on many cliffs and moorlands. It still feels quite remote and in fact many Cornish people don’t consider that Cornwall is an English county at all but a British country, Kernow. The Cornish nationalist movement demands a devolved legislative Cornish Assembly with powers similar to those in Wales and Scotland.

Before the railways arrived, the journey from London to Penzance took at least two days by road. By the 1860s the rail journey had reduced this to twelve hours. A traditional Cornish tale claims that the devil would never dare to cross the River Tamar into Cornwall for fear of ending up as a pasty filling. Tourists didn’t come either until the nineteenth century.

Virginia Woolf’s father, the literary critic and historian Sir Leslie Stephen, rented Talland House overlooking St Ives Bay in Cornwall, which he described in an 1884 letter as “a pocket-paradise with a sheltered cove of sand in easy reach (for ‘Ginia even) just below”. For her first twelve years she spent a few months each year at Talland House. The Godrevy Lighthouse could be seen in the distance and although Woolf set To the Lighthouse on the Scottish Isle of Skye, much of its imagery comes from her time in Cornwall.

For nearly four thousand years before the first tourists arrived Cornwall was an important producer of tin, which when mixed with copper forms the alloy bronze. Although there are few Roman sites in Cornwall it is thought that they mined here. After the Romans left Cornwall remained under the rule of local Romano-British and Celtic elites and there were strong links with Brittany.

Miners had the right to look for tin in any open land, as laid out in the Charter of Liberties to the Tinners of Devon and Cornwall in 1201. The same Charter also allowed miners to be exempt from military service and to pay lower taxes.

In the eighteenth century deep mining of copper was made possible by the invention of pumping equipment to remove some of the water from underground and Cornwall became the greatest producer of copper in the world.  A Cornishman, Richard Trevithick, developed high pressure steam engines which, mounted on wheels, became the world’s first locomotives.

A miner's life was always hard and brutal. Arsenic, which was used in insecticide and in paint, is a by-product of the processing of copper and tin. Because it is so poisonous workers needed to keep their mouth, nose and skin covered at all times, using clay to protect their skin at work. Women and girls didn’t go underground but were an essential part of the mining industry. Known as ‘Bal Maidens’, these women helped to separate tin from other mined substances.“Bal” is a Cornish word for mine. 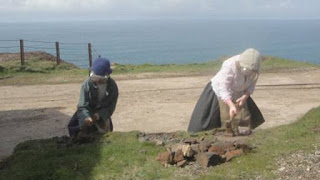 By 1839 about seven thousand children were working in the Cornish mines. Sons often followed their fathers down into the mines from the age of twelve. One particularly dangerous job they had to do was sweeping arsenic out of the flues.

Temperatures underground sometimes reached 60 c. The miners worked stripped to the waist and after their shifts their bodies were covered in red dust from the lodes of tin, copper and zinc they exploded out of the bare rock. Death and injury from rockfalls and explosions were quite common and many miners developed bronchitis, TB and rheumatism. Few miners were fit to work beyond the age of forty.

Then tin lodes were discovered in Australia, the Far East and South America, creating huge competition for the Cornish mines. Many mines closed in the 1890s and there was a “Cornish diaspora”, as miners left Cornwall to seek their fortunes in other mining areas across the world. 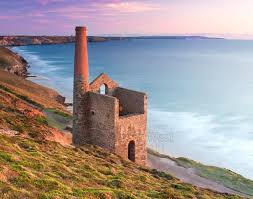 This is the South Wheal mine, used in filming the TV series Poldark.

The remaining mines still employed a lot of men and despite the dangers of the job it was lucrative. “Some weeks I would bring home £180 thanks to the bonuses,” said one ex-miner.“The average wage in Cornwall at that time (in the 1960s) was £12 a week.”

Then, in October 1985, the price of tin crashed from over ten thousand pounds a ton ton to about three and a half thousand pounds a ton. This was because new alluvial tin was discovered in Malaysia and Brazil and also because the United States released their tin stockpile reserve onto the open market at the London Metal Exchange. Overnight, the remaining Cornish mines became unviable.

In 1998, after more than three hundred years, one of the biggest mines, South Crofty, was forced to close with losses of thirty-three million pounds. Thousands of people were thrown out of work and towns such as Camborne, that once had thriving mines, now feel sad and impoverished. 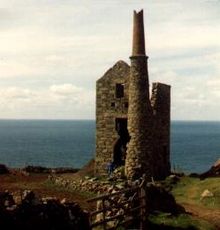 In 2016 a Canadian company, Strongbow Exploration, acquired a one hundred per cent stake in South Crofty, along with mineral rights over a further seven thousand hectares of land across Cornwall. A spokesman said: “We wouldn’t be doing this if we didn’t think South Crofty could open again. It was the jewel in the crown of an area with a rich mining history, and we believe that there’s a really good chance we can get it open again. We are extremely optimistic and feel that if everything goes well the mine could be open by 2021, and by open we mean with tin coming out of the ground.”