In the 18th and early 19th century, copper was used to  sheath the hulls of wooden ships (copper bottomed) and in 1768, a local miner called Roland Puw was present as a great mass of copper was discovered, close to the surface at Parys Mountain. He was rewarded for this find with a bottle of  brandy and a rent-free cottage for life.

I was visiting my friends Bob and Ewa on Anglesey a short while ago, and they were the most wonderful hosts and tourist guides. We visited Parys Mountain and I couldn't get over the strangeness of the landscape. The stones and dust on the path to the main excavation hole were yellow and brown and red and you could see pimpernels growing among the rocks. This photograph shows most clearly the colours of the landscape and the rather Grand Canyon look of the place. 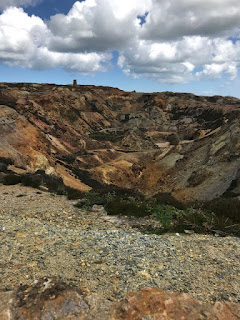 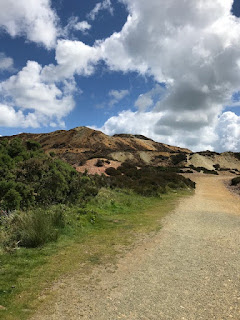 And this picture shows the workings of the mine when it was at its height.  It's hard to believe that the hole you can see was dug out of the mountain by men armed only with picks, shovels and gunpowder. A notice nearby tells us that what we're seeing is only a small proportion of what's there.....below the surface lie many caverns and miles of tunnels which are not worked because copper is no longer used as it was and besides, other countries can provide the world's markets much more cheaply. 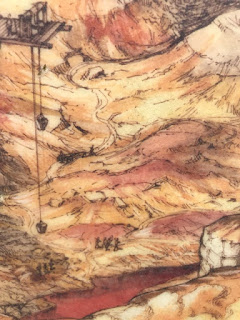 In 1990, Anglesey Mining plc sank a 300 m deep shaft and discovered ore resources of more than 6 million tonnes, beneath and separate from the old workings but low metal prices have stopped the further development of an important UK source of zinc and copper. (this I have taken from the very informative notices up at Parys Mountain.)

Parys Mountain was a great source of inspiration for a wonderful local artist called Kyffin Williams (www.kyffinwilliams.info)   This picture shows almost the same view as my first photograph. 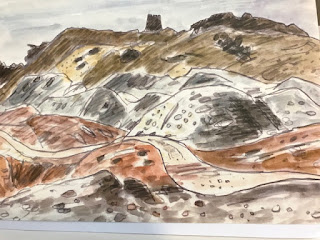 I hadn't visited this part of the country before. I know Cardiff from staying with my aunt during school holidays, but Anglesey and Snowdonia were a revelation. If this landscape reminds you of the drier parts of the USA, then only a few miles down the road is South Stack, home to seabirds and on the day we visited, a vision in sparkling blue and white. I saw a puffin bobbing about on the water, but that was through a telescope and I didn't get a photo.  Still the view from the window was beautiful. 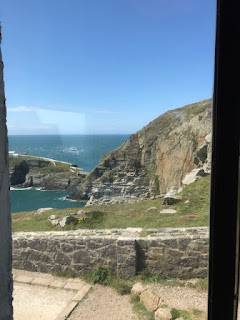 Next month, I'll write about our visit to Snowdonia and what I discovered about a material I hadn't given much thought to before. SLATE.   Do not take your garden chippings for granted!
Posted by adele at 01:30

It's not that long ago - certainly well after 1990 - that copper was so valuable that our local thieves were stealing BT's buried copper cable (they simply opened up a manhole on the downlands south of us and appear to have used a winch to wind very long lengths out of the conduit - there followed a sudden loss of internet connections for quite a few people). This was not entirely disadvantageous in the longer term as it hurried along BT's replacement of copper by fibre. I wonder if Anglesey Mining considered developing their new seam when prices peaked?

I look forward to your report on slate as this reminds me of the house where I was born (Edwardian, south London) and where slate was still used for its proper purpose: roof tiles, done traditionally straight onto the rafters with none of this modern nonsense like felting or insulation.

One day in a B&B in Wales an American asked me what would be the best souvenir of Britain to take home with him. I suggested an Ordnance Survey map. He didn't think much of the idea, but I still can't think of anything better. So many interesting things in such a small area!