For July, we have a second guest post in place of Caroline Lawrence's usual spot, as Caroline has left us. Please welcome Dr Eleanor Scott. 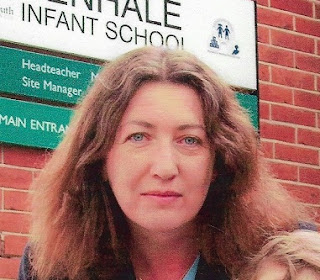 Eleanor Scott is an archaeologist and writer best known for her academic work on the Roman world and the archaeology of children and gender. She is the author of The Archaeology of Infancy and Infant Death. She also researches and writes about the remarkable Gertrude Bell. Her forthcoming books are previewed on her Open Access website.

Fourteen thousand years ago, an infant or small child - perhaps only a year or so old - was crawling, perhaps toddling, and playing in the vicinity of a camp fire in a dry river bed in Egypt. Probably the daylight was starting to fade, and the evening was beginning to cool, and the child sensed that the time for sleep was near. She yawned, shivered, and squatted down and defecated on the ground. One of the older children or adults nearby picked up the little lump of faeces and tossed it into the fire, where it sizzled briefly. The lump hardened as it baked and then dropped through the fire and lay amidst the ashes on the ground. There it remained in situ for millennia until excavated by archaeologists in the 1980s.

Children, especially infants, have been relatively invisible in the past; but they were not of course absent. Finding them archaeologically has tended to focus on their early deaths and pathologies, through the discovery of their skeletal remains. But other stories can be told of children’s lives – such as their diet, and how they played and learned, if we have a mind to - using weird and wonderful pieces of evidence like the little burnt coprolite from Wadi Kubbaniya. Many infant coprolites were found by Gordon Hillman and his team, and analyses of their contents revealed not just the presence of small children around the campfires, but also information about their diets, daily lives and routines.

A very broad range of plant foods was collected, processed and eaten by the Paleolithic people in the wadi, including large quantities of root vegetables, palm fruits and acacia seeds, and food processing at the site had been carried out using the large numbers of grinding stones and mortars. Spectrometry tests suggested the grinding of the tubers of nut-grass and club-rush in particular. Could this grinding process, the archaeologists wondered, have produced pulp for infants to eat? This idea tied in well with the coprolite evidence. The infants’ faeces were analysed and found to consist of finely ground plant mush, which would be suitable for weaning purposes.

A quantity of sand was also present throughout the charred matrices of several fragments of the fine-textured infant faeces. An infant crawling on sand will ingest the occasional handful, noted the archaeologists, while this is seldom true of adults. Most human infants begin to crawl by around six months, with some managing this feat as early as four months. This, and the fact that the faeces were probably wet when they hit the fire give us a fascinating insight into the way in which infants spent much of their time crawling ‘loose’ in the camp and pooing when they needed to, their faeces then being collected and disposed of on the fire in a fashion which has been observed amongst a number of hunter-gatherer tribes around the world..

The children of Wadi Kubbaniyah allow an insight into the early learning experiences of infants and children in prehistory. These infants, even at a very early age, appear to have been free to move unfettered around the camp site, learning by means of experience and through the interventions of older children and adults what to touch and not touch, and what was safe to taste, hold and approach. Children’s natural dislike of bitter-tasting vegetation, which is the predominant taste of poisonous foods, and their fear of snakes and snake-like shapes, would have afforded some protection, and watchful older humans listening out for the infants’ tell-tale penetrating cry a great deal more, but the infant’s own learning was essential for its long-term survival and social growth.

As an archaeologist, the Kubbaniyah example further raises something of paramount importance that is all too often overlooked when analysing excavated sites - the significance of infants and young children in the patterning of the artefacts found around camps and settlements and within houses, in all archaeological periods. Infants will pick up, carry and deposit any number of small objects within the area in which they are permitted to move freely. Many parents will have observed their own small children push coins and other small objects down the cracks between floorboards, into little excavated holes in the garden, and even into bins and down drains. A great many small household objects become ‘lost’ subsequent to their being collected and hoarded by a child.

Archaeologist Tony Wilmott recalled to me how objects moved around a compound he visited in Africa as the result of children’s agency:

‘Some years ago I visited a friend who works as a potter in Bakau in the Gambia. He lived in a compound which houses about 20 families, and had at the time two children under eight. There were plenty of other children in the compound as well. The paucity of manufactured playthings was remedied by the use of wasters and breakages from Idi's kiln with which they played for hours in swapping, collecting (‘Pokemon’), hoarding and hiding games, pretending the sherds were cars (‘Scalextrix’), boats and trains, and (in extremis) using them as missiles. It was at the latter point that the games were usually terminated by parents. The result, however was that the sherds remained where they lay, liberally scattered around the compound and trampled and buried in the dusty earth’

Children’s imaginative play is a human universal. Pretend play, or ‘symbolic play’ – a term first coined by Jean Piaget in 1962 – is considered by many influential developmental psychologists to be intrinsic to the human condition. The details of play vary between cultures, but the use of play by infants and children to make sense of their worlds, and especially to give an emotional sense of meaning and order to incongruities, is part of the human condition. Play and early learning – including free movement and grabbing handfuls of sand to eat - is related to the emotional experience of the child. Pretend play, particularly repetitive play, allows the child to miniaturise its world and express otherwise unsafe emotions (including fear, anger, distress, and disgust), as well as curiosity, joy and excitement, in a more controlled fashion. Play is also how the child learns to manipulate mentally the representations which make up human experience of the world.

The children of Wadi Kubbaniyah crawled and walked in the sand, and ate and played; and they left behind traces of the key parts of their lives in which they were making sense not only of their prehistoric environment but also their emotional, human world. And fourteen thousand years later, we can feel that connection to Paleolithic Africa, through the visibility of these infants exploring their humanness.