So my post last month - here - got us as far as the entrance to Lascaux. It's a surprisingly modern building, considering it's the gateway to a cave whose glorious paintings were created 20 000 years ago - but still, never mind. Let's go in, and find out more.

When the artists were decorating the pale limestone walls of the cave with their images of horses, bulls, aurochs, bison, and stags, this countryside would have looked very different. The planet was still in the grip of an ice age. Down here, in the balmy south, the summers would have been quite pleasant - but the winters were bitterly cold. It was too cold for forests. Great herds of animals roamed the land, providing food for the hunters. The sewing needle had been invented, and the people made well-fitting clothes out of skins to keep themselves warm. There were fish in the rivers and berries growing on the low-lying scrub. The people made instruments - flutes and pipes, drums perhaps, which they played at their gatherings and festivals. Some of these, almost certainly, celebrated the creation of new art works deep in the caves. Why did they do something so hard as to paint in places where it must have been very difficult to create enough light to see by? What drove them? Something of the same impulse, I imagine, that made mediaeval masons build soaring cathedrals - but I don't know. Nobody does: we can only guess. 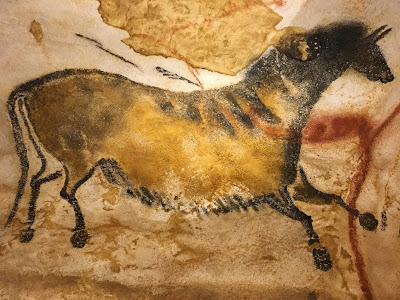 Anyway, the decorating of caves went on for hundreds, possibly thousands of years. And then it stopped. Maybe people's lives changed: maybe it was the land itself that changed. Certainly at some stage, the entrance to the cave was blocked. The artists and their work, the very caves themselves, disappeared into the shadowy spaces of the past: no-one remembered them any more. In our arrogance, we modern humans patronisingly thought of those early people as primitives, whose only purpose was to survive. You only have to look at their paintings to see how wrong that was.

Then, in the early twentieth century, there was a storm on a hillside above the small town of Montignac in the Dordogne region of France. A tree was uprooted and a small hole appeared. Farmers frowned when they noticed this; it was a danger to their animals. A goat even disappeared down it. So they blocked it up with branches to make it safe, and forgot about it.

Then, in 1940, when war was raging across the planet, four teenage boys, out with their dog, Robot, heard him barking. When they went to investigate, they saw that he was furiously digging away at the hole, making it bigger. They looked at each other. Curious. They dropped a stone down through the hole.

It was a long time before they heard it hit the bottom.

Over the next few days, they brought makeshift lamps and ropes and let themselves down through the hole into what turned out to be a great cave. Imagine their excitement when they played the light from the lamps over the walls, and caught glimpses of the paintings, still vivid and life-like after so many millenia! This is an area of painted caves - they knew what they had found. 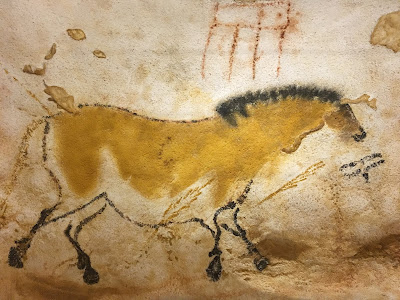 Well, after that, the experts came, and eventually the cave, which became known as Lascaux,  was opened up to the public. Of course it was immensely popular - but its success came at a price. The equilibrium of the cave, which hadn't been disturbed for so many thousands of years, was now destroyed: the paintings began to deteriorate. In 1963 the decision was taken that, to save it, the cave must be closed to everyone except a very few researchers and scientists. In 1983 a replica was opened - Lascaux 11. Marcel Ravidat, one of the four boys who had discovered the cave and had been involved with it ever since, came to see it. After examining it minutely, he declared that he was satisfied - the replica was worthy of its great original!

Then, in December 2016, Lascaux IV was opened. This was the exhibit we were going to see.

We were only there for a few hours, and the story of the creation of this place is incredibly complex. I don't pretend to understand it all. As far as I can gather, although the paintings themselves are produced with absolute accuracy, the layout of the cave is not. You might think that a replica can never be authentic, can only be a pale facsimile of the original. Well - I've never seen the original, so I can't judge. But - before we entered the 'cave', our guide gazed at us all solemnly, and said: "I can promise you - what you are about to see is going to absolutely BLOW YOUR SOCKS OFF!"

And he was absolutely right. What you see is stunning. The paintings are beautiful, created with an economy and perfection of line and colour that would be impressive in any age. And the artists used the contours of the rock to create a 3D effect in some places; a sense of power and movement. New discoveries are being made all the time - for instance, I had read that charcoal fragments had been found in the cave, which were probably used by the artists - a detail I had used in my story. Not true: carbon dating has shown that this charcoal was thousands of years more recent than the era of the paintings, which were done using only natural mineral pigments, which cannot - so far - be dated. 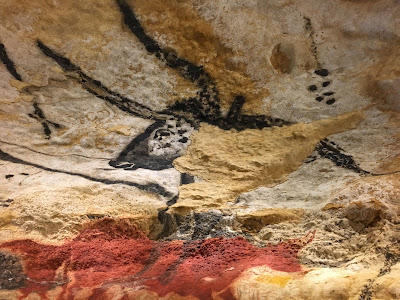 But there is still much more that isn't known. Exactly why the paintings were done is the obvious unknown. Another is the meaning of the ubiquitous patterns of dots and small rectangles.

Yet this museum answers an enormous number of questions. And above all, it sets before us this beautiful art. I've only touched on what there is to know about Lascaux: I'd love to tell you the stories of the four discoverers of the cave. And you might be interested to know how my own story, my current work-in-progress, ties in with that of the cave. But I won't try your patience any longer. I'll just put in some pictures, which will speak more than adequately for themselves: and I'll strongly recommend that you visit the museum if you get the chance. And see if, like me, you then become fascinated to know more about the artists and their people: these early - but not inferior - versions of ourselves.

Thank you for this beautiful post, Sue.
These images are, indeed, so beautiful, powerful and mysterious that you're scared to let yourself think too deeply about them, for fear of being swept away. They must, surely, have had a much deeper significance than mere decoration and it's infuriating not to be able to know.

Lovely, Sue! Loved trying to imagine myself back to those ancient times.

Spine-chillingly gorgeous - thanks, Sue, for sharing with us!

Thanks for this Sue. I hope to be able to get to see the caves one day.