Every year, I come to Monterchi, a small town in Tuscany, most famously the home of Piero della Francesca’s Madonna del Parto (which I have blogged about before).

Up in the small central square, next to the little cafe and in the shade of the lime trees, there is a  plaque on the wall commemorating the deaths of three soldiers during the Second World War, all members of The Central India Horse. 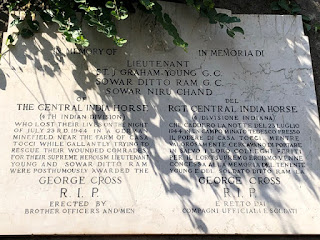 Their regiment acted as reconnaissance unit to the 4th Indian Division. In July, 1944, Lieutenant St. John Graham Young was leading his men on a night patrol when they found themselves in the middle of a German minefield. Despite being severely injured himself, he went to help one of his men and managed to apply a field dressing, he then rallied his men and guided them to safety. In another part of the minefield, Sowar Ditto Ram had stepped on a mine and had his leg blown off below the knee. He retained consciousness long enough to crawl to a wounded comrade and apply a field dressing before he succumbed to his wounds. Both men were awarded the George Cross and their heroic action is recognised here, along with their comrade, Sowar Nero Chand. 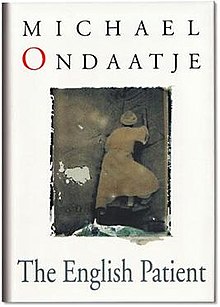 The plaque is a reminder that this quiet little town in Central Italy was right in the path of the hard fought Allied advance up through Italy during the latter stages of the Second World War. It is very probably a pure coincidence, but I’m always reminded of Kip, the Indian Sikh sapper,  in Michael Ondaatje’s The English Patient.  The basilica  of  St Francesco in nearby Arezzo houses the fresco cycle that Kip shows to Hanna in the film version and sometimes I wonder if, perhaps, the author might have been sitting in this very square when he saw the plaque and it gave him an idea for a character in his novel. 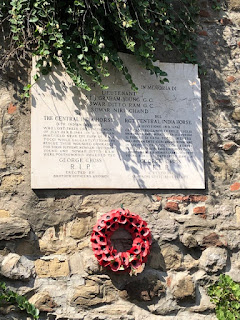