Whenever I have a spare moment in London,  I will invariably head for a museum. A couple of weeks ago I was there on business and happened to have an afternoon free which was spent very profitably in the British Museum.
I enjoy photography, but I am in the realms of keen amateur and happy snapper.  It's something that gives me pleasure and it's a hobby outside of my day job, but purely for off the cuff fun.  For some time I have been trying to get a good shot of the citole in the medieval exhibit at the British museum, but lighting and reflection makes it extremely difficult and I have yet to succeed in obtaining a great image.  This is a photo from the British Museum's own website and used as per the permission on the site. 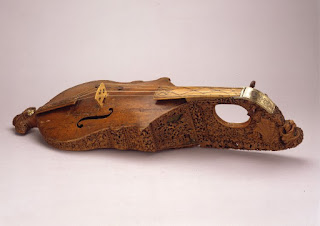 This beautiful object is a Citole formerly known as a gittern.  A citole, pronounced 'sit-oll' was originally a plucked instrument but it was later converted into violin form to be played with a bow.   Its life as a complete instrument began in the late 13th to early 14th century and the original parts are the back, the sides and neck.  The new parts consist of the sound board, finger board, tail piece and bridge. Above the peg box there is a silver-gilt plate engraved with the garter arms of Elizabeth I and Robert Dudley.  The carved, decorated panels depict hunting scenes, and the end terminates in a fabulous dragon with a jewelled green eye. The hunting scenes are typical of 14th century manuscript illustration, but such details are much rarer to find in wood.  The best comparison are the early 14th century choirstalls in Winchester Cathedral. 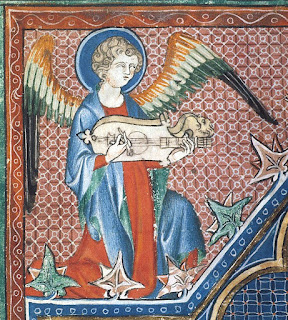 You can hear an example of a replica citole being played here by its owner Ian Pittaway here on Youtube. Ian Pittaway Citole

As to my photos.  Although as usual I didn't have much luck with the citole in its entirety, I did take a rather good one of the ends, and especially the green-eyed dragon.  What marvelous, skilled wood carving! 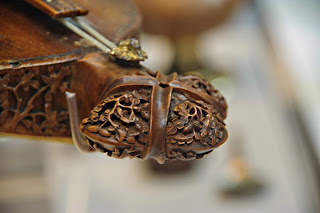 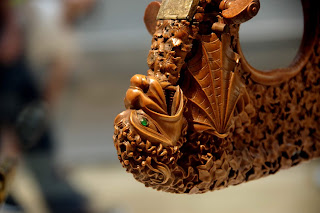 Elizabeth Chadwick is a multi award winning bestselling historical novelist. Her latest novel The Irish Princess will be published on September 12th under LittleBrown's Sphere imprint.