Playing in a Mystery Play

So says Wikipedia. What it doesn’t say is that they are great fun to perform in and really help to bring a community together. I know this because I played “God the Son” in a mystery play put on outside my village’s wonderful Norman church in late June. We were blessed with wonderful (if hot!!) weather and all went (relatively) well.

We started with auditions in November last year. I was assistant director, but got pulled into performing in the first play "The Deluge", as God the Son:


So great of might is my potency
All things shall be wrought by me
I am one God, in persons three
Knit in one substaunce.


The play fell into two halves: in both, God punishes humankind for their sin and removes them from the environment that sustains them; and in both, the woman is tempted by the devil. Although though venial, Noah's wife plainly displays more empathy with the sinners who have died. The visual references in the first half were mediaeval, while the second half was played in modern dress.

The director told us not to be intimidated by the look of the text on the page. It had been written for the ear not the eye, and we were told to think of it as a kind of vocal score, and that the language is comprehensible and entirely alive when played with appropriate speech rhythms and action. When he adapted our versions he preserved the sounds and rhythms of the original as far as possible. As he said, it is that rather than understanding each word that  is the basis of most spoken communication.

The colloquial English speech rhthms focused on alliteration and rhyme. We were told to forget anything we'd been taught about Shakespearean blank verse or how to read aloud the King James Bible. Still, many found lines such as this (said by Adam):

I dare not touch thine hand for dread
Of our lord God omnipotent.
If I should work after thy rede,
Of God our maker, I should be shent.

The ‘Creation and Fall’  we played derives from the N-town cycle that originated somewhere in East Anglia, possibly Lincoln and Bury St Edmunds. We do not know how the text was originally performed. The first half of Noah, ‘Building of the Ark’ ,comes from Newcastle-upon-Tyne, where it was performed by the Guild of Shipwrights - so when Noah says that he is no wright and doesn't know how to build a boat, it got a lot of laughs. The remainder of Noah comes from York, where it was played by the sailors and fishermen on a pageant wagon.

Noah was played (by itself) in the Rose HIll Community Centre before a very large group of children from the Youth Club, who enjoyed it immensely and seemed to have no problem with the language.

Our two big performances were on 29 and 30 June. The play first began in the thatched Village Hall with the creation of the world and the banishing of Lucifer. Then we all processed to the churchyard through the days of creation. 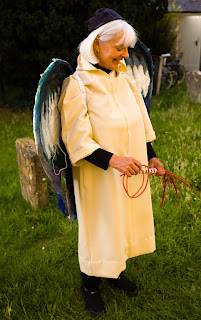 Now heaven is made for angels' sake  The first day and the first night.

The second day water I make.

The third day tree and every growing thing
Both herb and flower of sweet smelling
The third day is made by my working.


Sun and moon and stars also


The fourth day, I make the same.
The fifth day, worm and fish that swim and go,
Birds and beasts, both wild and tame.


The sixth day my work I do, 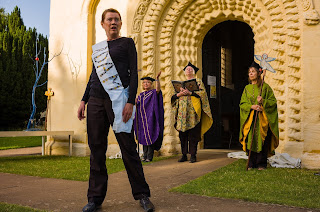 And make the man ‘Adam’ by name.
In earthly paradise withouten woe
I grant thee biding - lest thou do blame.


Flesh of thy flesh and bone of thy bone; Adam, here is thy wife and mate:


Noah had a different cast:


The director warned us: "Many of the rhymes in the Noah plays work phonetically in Geordie or Yorkshire, but not in southern accents. Rather than try to replicate systematically a northern accent, I would rather celebrate the diversity of Englishes that members of the cast bring with them from different places, and if this helps achieve some of the rhymes that would be great - I'm not expecting to resolve all of them."

And so, God "in person three" was an all-female  deity: English Father, Australian son and South     African Ghost. Adam (also female) was Scottish;   Eve was Swiss; The Devil came from Yorkshire; Mrs Noah was Czech. Noah's children were a mish-mosh indeed. And it worked!!


Being medieval, the attitude to women caused some gasps when the Holy Ghost admonished Eve:

Woman, thou soughtest this sinning
And bade him break my bidding.
Therefore, thou shalt be underling.
To man's bidding bend.
What he biddeth thee, do thou that thing
And bear thy children with great groaning
In danger and in death-dreading
Into thy life's end. 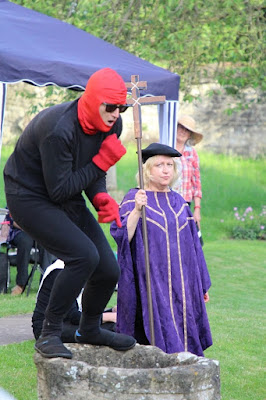 My star moment? When I banished the Devil:

Thou wicked worm, full of pride,
Foul envy sit by thy side.
Upon thy gut thou shalt glide
As worm wicked in kind.
Till a maiden in middle earth be born.
Thou fiend, I warn thee beforn.
Through her thy head shall be to-torn.
On thy womb away thou wind. 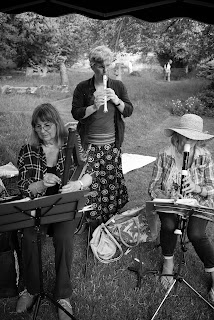 I mustn't forget to mention our wonderful musicians who played early music with aplomb: 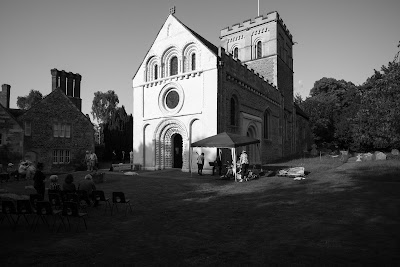 Posted by Deborah Burrows at 10:15