The Enigma of the Lady and the Unicorn

Recently I had the opportunity to visit the National Museum of the Middle Ages in Paris, which houses the famous series of Flemish tapestries known as The Lady and the Unicorn. My immediate impression on entering was of size, gorgeous colour and dizzying detail. The tapestries were much larger than I'd imagined - clearly meant for a room of very grand proportions, yet a closer look reveals the minute detail in the work with its 'mille-fleurs' background of differentiated plants and flowers.

I've long been interested in these tapestries, partly because of the strangeness of the mythical beast and the stories that have grown up around it: the belief that only a virgin can tame a unicorn, with its reference to sexual innocence and experience, the speculation that the idea of a unicorn originated in a very inaccurate description of a rhinoceros as being 'like a horse with a horn'. I had also read that the tapestries depicted six senses and was keen to find out what sense existed beyond sight, hearing, touch, taste and smell. Through reading various guides and talking to the room attendant I soon learnt that there is more than one interpretation of not only the sixth tapestry but the meaning of the whole series. Is it an allegory of Love or Renunciation? 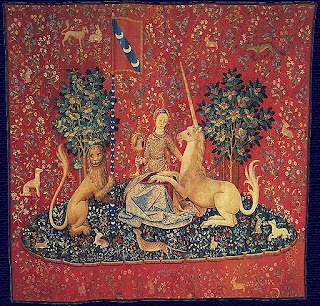 The tapestries are thought to have been woven at the end of the fifteenth century and the coat of arms on the standard show a blue band with three crescent moons, which belonged to the Le Liste family from Lyons. This identification is further supported by the choice of a lion as standard bearer. One might be forgiven for jumping to the conclusion that the tapestries celebrate a wedding in the family, as the last tapestry makes reference to 'A MON SEUL DESIR' - 'My One Desire'. One guide rebuts this, saying that all the women pictured have different faces. On the other hand, they are all blonde and perhaps it would not have been easy  for different workers to replicate a face? The truth is that as a novelist I would rather like it to be linked to an actual event, with the promise of a story behind it . . .

The representation of the five senses is very clear.  The first tapestry in the cycle shows the lady holding up a mirror to the unicorn and thus depicts Sight. Hearing is shown through the lady playing a 'positif' (portable organ) and smell by the lady plucking a carnation from her maidservant's basket, humorously echoed in the mimicry of a tiny monkey. 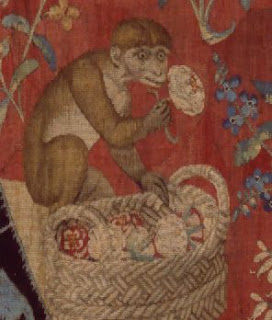 Taste is shown by the lady taking a sweet  from a dish offered by her maidservant and Touch in a tableau where the lady holds the standard with one hand while touching the unicorn's horn with the other.

The sixth and final tapestry is where a conundrum arises. Is the lady taking a jewelled necklace or returning it to the casket? As she is no longer wearing the necklace that she wore in the other tapestries, several scholars seem to agree that she is returning it, thus suggesting not a preparation for love but a renunciation and a rejection of the world of pleasure represented by the senses. In support of this they draw attention to the motif of tears on the pavilion and interpret  'A MON SEUL DESIR' to mean 'according to my will only'. In this case, the last tapestry relates more to the intellect than the heart. To say it represents an act of Christian charity is perhaps to take the analogy too far  as she appears not to be giving the necklace  away but storing it. Nonetheless this interpretation is quite convincing. 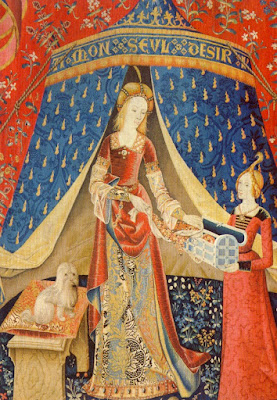 Additional evidence for this view may be that the other senses are presented in order of the importance given to them in Medieval belief, with Sight and Hearing first as the higher senses - those senses through which we can most easily learn and become enlightened. Smell, taste and touch come later.

On the other hand, further motifs within the tapestry series, such as the recurring rabbit or hare, the profusion of flowers and plants and a tree laden with pineapples suggest references to fertility and thus are concerned with love rather than the intellect. The pavilion may represent a private place into which lovers could withdraw.

The writings of the Chancellor of the University of Paris, Jean Gerson  (1363 -1429) mention 'six senses - five external and one internal - namely the heart - which we must master as six schoolchildren.' He sees the heart as the controller of the physical senses and needing to be schooled to avoid sins such as lust. As the tapestries are thought to have been created some time in the last two decades of the fifteenth century, this strand of thought that sees the heart as a sixth sense, controlling both desire and the soul, would have been familiar and is thought to have been widespread in 15th century France.

Is it not possible that there are elements of both Love and Morality present? We must avoid falling into the trap of thinking that people of an earlier time were any less subtle or complex in their thinking than we are, just because their beliefs were different. My own impression was that the tapestries have a rich duality with elements of both renunciation and eroticism. 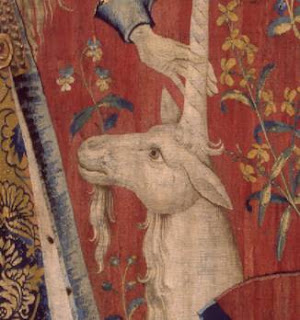 Thank You fro this post .I just loved this museum .My favourite in Paris . The tapestries are just beyond words as they have survived in such wonderful condition . I Had no idea that they were so mysterious.

Thank you for your insight into these tapestries - meanings that were readily accepted 'then', that we may never understand. I often think of the significance and use of unicorns, common and unquestioned yet no artist illustrated them in the same way. Rabbits, monkeys, birds, dogs, lions, on and on, are relatively accurate and consistent - but even within this series the unicorns are different, one more resembling a horse, the other a goat. And neither (or none that I have ever seen) appearing as a rhinoceros.