Don't be out of Pocket by Susan Vincent 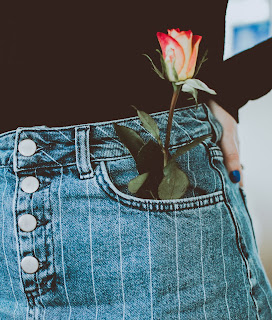 I love pockets. This doesn’t mean that I must have them, but just that the whole notion is so brilliant. The idea of having a built-in receptacle – a handy ambulatory container for the things that you need throughout the day – is pure genius. A bag, you can always leave somewhere by mistake and it clutters your hands or drags at your shoulders. But pockets are different – pockets, no matter where you go, they effortlessly come along with you.

Useful as they are, pockets often look good too. Virtue out of necessity, their functional features – the openings, the flaps, the outlines – are made decorative with embroidery, extra stitching, or contrasting colours. This is a ‘pimp my pocket’ restyle of the basic receptacle concept.

But I even love the weirdness of the way that such essentially practical devices are often entirely useless. Think of those pockets on the front of a blouse, and the absurdity of actually carrying anything in them. Or what about those titchy change pockets in jeans that are too small to ram your fingers in, let alone remove again clutching a coin. And then there are faux pockets. These promise entry to a roomy interior but on closer inspection turn out to be just flaps – these are pocket teases, of ornament but no use.

But where did pockets come from? Were they always around? 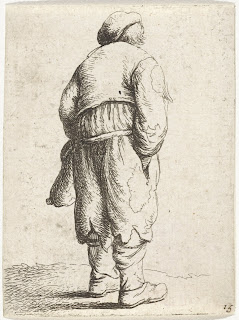 The not-so-humble pocket as a built-in garment feature appeared from around the end of the fifteenth century, inserted into breeches.

As the sixteenth century progressed it began to migrate to garments on the upper body. But it was the eighteenth century that might truly be called the era of the pocket, when they became such striking – and capacious – design elements on outerwear, as on the coat and the waistcoat here. 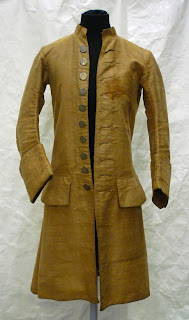 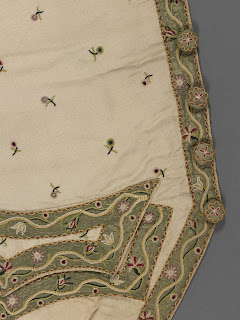 Even if not apparent, as in this quite severely cutaway garment from 1780–90, the back and side views reveal that this coat is flamboyantly rocking those pockets. 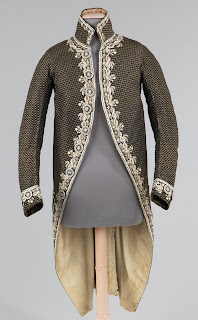 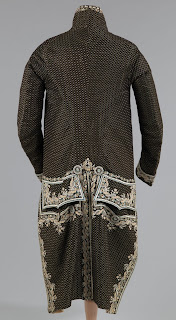 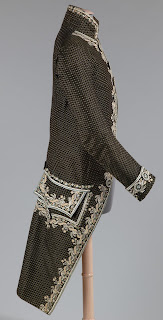 From this point on, pockets were standard issue in male garments, with an increasing range of sizes, types and locations. But womenswear tells a somewhat different story. While they started to be sewn into skirts in the sixteenth century, pockets for women did another amazingly brilliant thing as well. They became separate garments consisting of the pocket itself attached to a tape either singly or in pairs, which were worn tied around the waist. Sometimes plain, they were also often prettily embroidered. 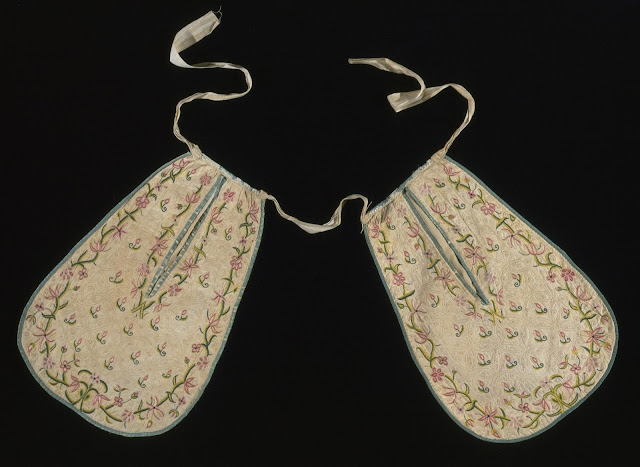 These are the sorts of pockets that are immortalized in the rhyme that has puzzled generations of children and their parents, for whom its mundane description has now been lost in the mists of dress history:


Lucy Locket lost her pocket,
Kitty Fisher found it;
Not a penny was there in it,
Only ribbon round it.

To add to the all-over niftiness of these standalone pockets, they could either be worn on top, or hidden away over a shift and corset but underneath the skirts. You can see this in the tight-lacing caricature below, in which the subject is getting dressed. Such a wearer would reach her pockets through an opening in the side seams of her gown. This made them full-proof against theft, but also explains the aspersions cast on a woman’s virtue if her pocket was successfully picked. 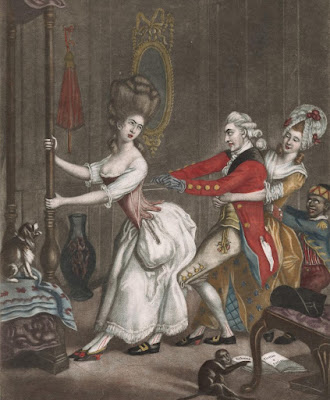 When the nineteenth century dawned, bringing with it high waists and light, narrow-fitting dresses, neither separate pockets nor the sewn-in sort were feasible. Enter the reticule, a small bag – very often fancifully decorative – that eventually ushered in the whole vast world of handbags. 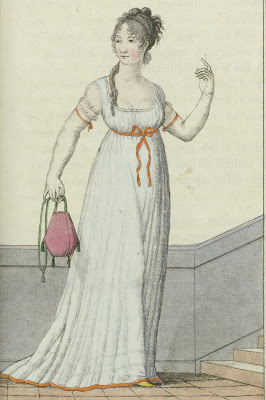 But pockets didn’t die away. Around the middle of the century they returned to womenswear as the built-in variety, though they have never been the necessary features that they are in male garments. As we all know, in modern womenswear function is subordinate to looks, and pockets are only included if they do not spoil a garment’s drape or cling. Instead, women have been both hampered and helped in equal measure by handbags and purses.

Once created, these pockets of ours allowed for the invention – or adaptation – of other items of material culture (as historians rather pompously like to put it), and thus new habits and practices. Pocket money, pocket knives, and pocket handkerchiefs are still part of our lives. The pocket watch has gone, but we know what it is: a timepiece carried in a fob (a small purpose-made pocket). Less familiar are pocketbooks, sometimes meaning a folding case used for carrying papers and banknotes, and at others referring to a notebook for memoranda. Or what about this rather lovely pocket pistol from around 1815: deadly, elegant and infinitely portable. 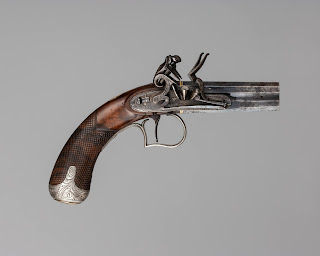 And of course, carrying things on the person in this way in turn facilitated a new branch of criminal industry: the pickpocket. But probably what fascinates me most about pockets are the performances that they allow to their wearers. I was reminded of this the other day when I walked past two men in suits, both of them with their hands plunged in their trouser pockets, busy jingling change. Pockets give us something to do with our hands when we are nervous or bored. In the cold we ball them into fists and huddle them into, yes, our pockets. Pockets help us express slouching defiance of authority. And with pockets you can be nonchalant. 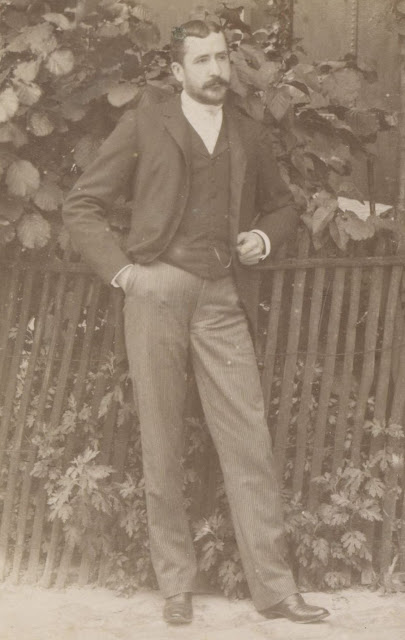 In fact, it strikes me that traditional womenswear, in denying them (pocketed) coats and trousers, made it much harder to perform devil-may-care ease. Along with all the social mores and the normative gender behaviours that prohibited this kind of emotional register, women’s clothing also worked against the performance of such expansive and easy nonchalance.

Having worked this out, I love pockets even more than before. Sure, they trap the tissues which then disintegrate in the wash. But with pockets, we can be insouciant and cool. This is a very big thing – this is gender equality. And it comes courtesy of a very small feature indeed. 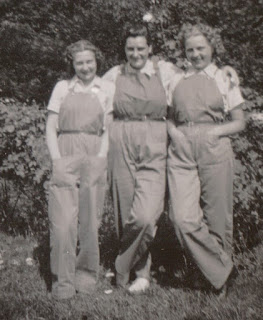 If you want to take pockets further – and let’s face it, who wouldn’t – then here are some excellent places to start:

Oh thank you for this! It's about time the pocket got its dues.

I, too, have loved pockets all my life. One reason I hate getting dressed up is that 'dressy' women's clothes so rarely have pockets. I've always loved the freedom of being able to stick a credit card and a bit of cash in a pocket and just go.

I find I'm returning to the Lucy Locket pocket. I have one of those small pouches which click fastens around the waist. I can go out wearing that with phone, money and keys in it. And these days I rarely go into my garden without wearing a similar but larger 'pocket' to hold string, snips, gloves and even a trowel.

I, too, have always loved good and useful pockets, and I despise those tiny decorative (and often false) pockets given to women's clothes. Good pockets will sell a top or trousers to me.

Yes, yes, yes to pockets for women - useful, insouciant and subversive! Thanks for this, Susan!