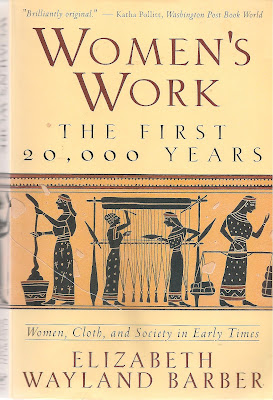 I want to sing the praises of an absolutely wonderful book: ‘Women’s Work, The First 20,000 Years: Women, Cloth and Society in EarlyTimes,’ by Elizabeth Wayland Barber (Norton, 1998). It’s about the long, long history and prehistory of spinning, weaving and designing textiles – work which, right up until the Industrial Revolution, was almost always done by women.

Wayland Barber is an expert in prehistoric textiles. Her interest in the subject began in childhood as her mother loved to weave and sew and she grew up ‘constantly aware of the form, color and texture of cloth’.  Studying Classical and Bronze Age Mediterranean archeology at college, she began to notice patterns on pots and frescoes that ‘looked as if they had been copied from typical weaving patterns. But when I suggested this idea to archeologists, they responded that nobody could have known how to weave such complicated textiles so early.’

Undaunted, Wayland Barber decided to look into the data for early weaving technologies. Expecting to write a small article, she rapidly realised this was going to be a huge subject; the article eventually became a 450 page book: ‘Prehistoric Textiles’, Princeton 1991. ‘Along the way I kept running across wonderful bits of information about the women – virtually always women – who produced these textiles and about the values that different societies put on the products and their makers.’ Women’s Work is as much about the women, the makers of the cloth themselves, as it is about the textiles they created. 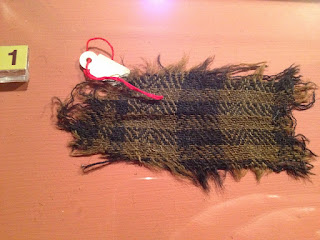 An experienced weaver herself, Wayland was able to experimentally replicate some of the earliest textiles we know of, like the woollen plaids from between 1200 and 8oo BCE  preserved in the Hallstadt salt mines in Austria. The salt ‘preserved the handsome green and brown colors as well as the cloth itself … and it looked for all the world like a simple plaid twill from some Scottish kilt. … Twill, like tweed, comes from the word two and refers to a distinctive method of pattern weaving in which the threads are paired.’  Attempting to replicate the weave provided all kinds of insights into the methods used for the original. It took many hours for her and her sister to string the warp threads on to the loom one at a time: only once the long warp threads have all been strung can you can begin to weave in the lateral weft: weft means literally ‘that which has been woven’. Wayland Barber notes: ‘that is where a helper really speeds the work: a friend to receive and fasten the other end of each long warp thread, saving all the time and energy of walking back and forth, back and forth, from one end of the loom to the other’:

We know, for example, that women sometimes helped each other with their weaving projects … because we sometimes find the wefts in ancient cloth crossed in the middle of the textile. This can only have been caused by two people handing spools of weft back and forth to each other as they wove simultaneously on different parts of the same cloth.

With her knowledge of the practicalities of textile work, Wayland Barber is able to shed light on the ways women have worked down the millenia, and the enduring persistence of techniques, traditions and even patterns. In her chapter ‘The String Revolution’ she makes the – once you think about it – blindingly obvious yet revelatory observation that you can do almost nothing without string. Forty thousand years ago, very likely even earlier, ‘while others were painting caves or knapping fancy flints, some genius hit upon the principle of twisting handfuls of little weak fibers together into long, strong thread.’

With string you can tie things together, make bundles, knot it into fishing nets and construct snares. You can string beads, stitch hides to make clothing, tents, coracles or bags to carry things in; you can string a bow. Sinew will work for some of those things, or strips of rawhide, but string is much better. And with string, or thread, you can weave cloth. The String Revolution may be co-eval with, or even predate the Stone Age: but string rots, so the evidence is hard to find.

Or is it? Wayland Barber points to the occurrence of bone needles in the Upper Paleolithic, 26,000 to 20,000 years ago, and of burials with shell beads. The Lespugne ‘Venus’ – a carved bone figurine of a woman dated c. 20,000 years BCE, wears a string skirt: a fringe of long cords hanging from a hip girdle; the sculptor has even carved the twists in the fibres.

Almost all the Venus figures are completely naked, but a few others wear clothing. … A few… wear simple bands or sashes, but the Venus of Gagarino sports a string skirt: a shorter, tidier version than her French sister, and this time hanging only in the front, but covering just as little.  (p55)

Wayland Barber provides examples of women wearing the string skirt ‘here and there in the same broad geographical area through the next twenty thousand years [my italics], and even around 1300 BCE, some actual string skirts [are] preserved or partially preserved for us in the archeological record’ including on the bodies of young women found in log coffins of the Bronze Age, such as the one from Egtved, Denmark,now in the National Museum of Copenhagen, dated to 1400 BCE.

It's quite a sophisticated garment: the cords it is formed from were woven into a narrow belt at the top, which ‘wrapped around twice and slung low on the hips’ and was fastened with a knotted cord. Near the bottom of the skirt the cords are held in place by a lateral spacing cord ‘to keep them in order’, and below that are ‘looped into an ornamental row of knots,’ which Wayland Barber says give the bottom edge of the skirt heaviness and swing, like a beaded fringe. Frankly, it sounds a lot of fun to wear! But it wouldn’t keep you warm or preserve ‘modesty’:

Not only do the skirts hide nothing of importance, … if anything, they attract the eye precisely to the specifically female sexual areas by framing them, presenting them, or playing peekaboo with them. […]  Our best guess is that string skirts indicated something about the childbearing ability or readiness of the woman, perhaps simply that she was of childbearing age … [or]… was in some sense “available” as a bride.  (p59)

Wayland Barber goes on to examine the ‘girdle of Aphrodite’ from the Greek myths, described by Homer in the Iliad as a ‘girdle fashioned with a hundred tassels’ which confers the gift of irresistable sexual attraction on the wearer. It’s worn constantly by Aphrodite, goddess of love and sex, but when she lends it to Zeus’s wife Hera, Zeus forgets everything in his desire for his wife. Could this be the archetypal string skirt? Wayland Barber points to various south central and eastern European folk costumes: fringed aprons which women would put on at their betrothal and weddings. 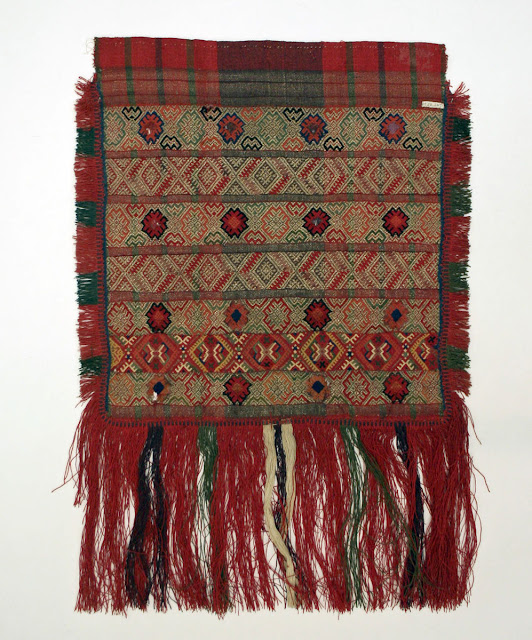 This Romanian apron above decorated with diamond lozenges symbolising fertility.

In Mordvins, east of Moscow and west of the Urals, well into the 20th century a girl would ‘don a long black string apron at the time of her betrothal. Hanging only in the back, like that of the Venus of Lespugue, but wider, it marked her as a wife’. Similar aprons were worn by women in Serbia, Romania, Macedonia and Greece; in the Argolid the garment was known as a zostra. It could be up to 12 feet long with a deep fringe, worn by women who wished to conceive and laid on the stomachs of those undergoing a difficult labour. Wayland Barber writes charmingly of her experience in trying on a Macedonian girdle owned by a friend:

The front part consisted of a short woven apron with a piece appliqued onto it which exactly framed the pubic bone underneath. Below this hung a weighty fringe nearly double the length of the solid part. We tied it on to me and began to wrestle with the other half, a girdle perhaps twelve feet long, woven with white and black threads in opposite directions and terminating in a great fiery cascade of red fringe at either end.

The belt wrapped around about six times and then looped through itself to form ‘a solid mass of apron and fringe in the back … so heavy it swung with a life of its own’. The black and white photo in the book, of the sash of girdle in question, does not reproduce very well, but the Macedonian girdle pictured below it, belonging to the British Museum, is clearly similar. The fringe is made of flame-red goat hair. 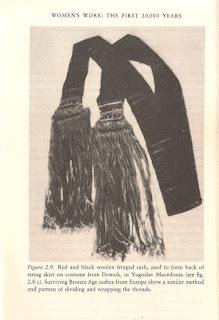 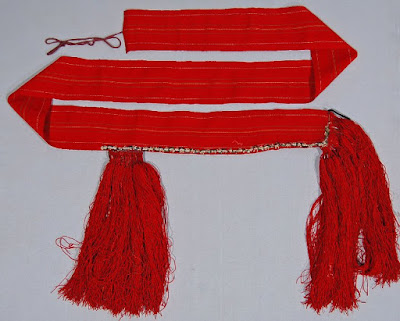 That was the greatest surprise of all: the independent life of what now enveloped me. I danced around the room from one mirror to the next, fascinated by the way the heavy fringes moved … I felt exhilarated, powerful; I wanted to make them swish and jump. My friend laughed and admitted that it made her feel the same way. …For days afterward I pondered the unexpected strength of the experience.

A sense of powerfulness? Is that part of the symbolism of the skirt? The ability to create new life must surely have been viewed as a form of ultimate power. Exhilaration in wearing it? Was that, too, part of the reason why this garment lasted for twenty thousand years?

As well as spinning and weaving, the book considers the making and decorating of pottery, basket making, and the designing and creating of clothing, all women’s traditional work down the ages – and examines some of the many myths and fairytales in which spinning and weaving play a part. ‘Women’s Work’ really is an extraordinary and inspiring book. I must have read it two or three times by now, and it provides so many wonderful glimpses into the past and the lives and activities of our distant mothers and grandmothers that I’m certain I shall returning to it again.

I echo Enid -- and I'm cheered to see the usefulness of string praised. Indeed, how could civilisation have begun without it? As someone increasingly getting in to gardening, the absolute necessity of string has been pressing on me of late. It ties in branches, it ties pots to fences, it supports plants, it ties supporting cane, wigwams together, a loop of it ties up tools, it replaces belts, buttons and shoelaces. It's early technology.