Wine Tasting in the South of France, by Carol Drinkwater 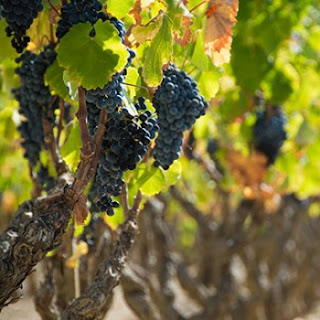 I am frequently asked about good wineries to visit as a day trip from our Olive Farm in the south of France. The fact is there are dozens to suggest. So I thought it would be fun this month during these very hots days - in French we call such a heatwave la canicule - to offer a few snippets about our local wine history as well as making one or two suggestions of fabulous chateaux or more modest vineyards. Havens, where you can sit in the shade and sip a chilled glass or two of local wine.

From Banyuls,  close to the Spanish border, to Bellet above the coastal city of Nice, wines are produced. The South of France is a rich wine area with many varieties growing in the vineyards. Although all colours are being produced, the Midi is most renowned for its rosés. The hot climate marries well with a chilled lighter variety. This is a land of hilltop towns and sleepy villages where the most exciting event of the week is market day and where the playing of boules or pétanque in the village squares, shaded by plane trees, is still the most popular pastime.

The south was its own country. Links with Paris were almost non-existent. Southerners, with their own rich cultural identity, communicated and conversed in their own language, the langue d'oc, until 1539 when the Ordinance of Villers-Cotterets made French, the langue d'oil, the administrative language of France. By 1789,  the time of the French Revolution, these richly-poetic southern tongues had been outlawed. Provençal is a dialect of Occitan and was spoken in the eastern half of southern France. These are romance languages, once the language of the troubadours. 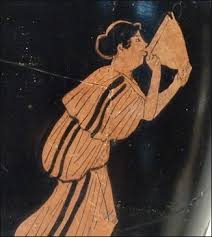 The great port city of Marseille, originally Marsilia then Massalia was founded by Greeks from Asia Minor sometime around 600 BC. These intrepid sailors were Phoceans from Phocaea, known now as Foça in Modern Turkey. That entire western coast of Asia Minor, today Turkey, was inhabited by Greeks until the population exchange of 1922/1923 that followed the Greco-Turkish War of 1919 to 1922.

Within striking distance of Marseille, you will find:
The Calanques National Park is on Marseille's doorstep. 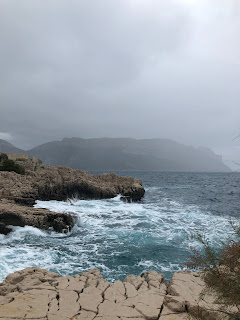 This is where my latest novel, THE HOUSE ON THE EDGE OF THE CLIFF, is set. A very moody shot taken on a wet and windy spring day.

Turning north, follow the D9 towards Aix-en-Provence, then direction to Puy-Sainte-Reparade and you will find Chateau la Coste. 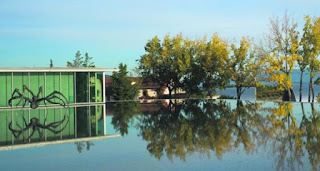 This vineyard estate, also a hotel and art gallery, is a unique experience. The 600-hectare property is owned by Paddy McKillan an Irishman from Belfast. The chateau, more a country house, where his family resides, dates from the 17th century. The views while walking in the vineyards are memorable. Timeless. There are works of art scattered all about the place.


Until recently, southern French wines have been rather looked down upon even by the French. That is changing rapidly. The rosé wines from this area, though few are grand crus, are possibly the best in the world and perfectly adapt to the long hot days of our southern summers.
Paddy McKillan of Chateau La Coste aspires to produce the best rosé in the world.

The Bandol area, west of Marseille, has an abundance of vineyards to visit. The coastal strip is very well-known for it rosés. Bandol itself has become a rather touristy resort town but take a short drive inland and you will find peace and quiet and time to reflect within the dozens of vineyards, most are ready to welcome you. 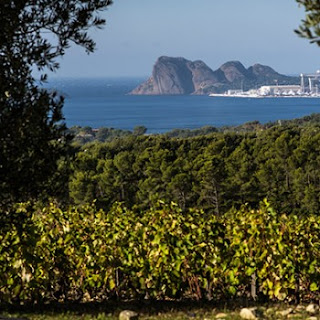 We usually buy a couple of cases for summer at Moulin de la Roque Bandol. Outside Bandol near Le Castellet. The winery was founded in 1950 in an old wheat mill. It boasts 305 hectares of land and straddles eight communes.

The Phoenicians visited our coast of southern France around the same time as the ancient Greeks, possibly even a little earlier. Both the Greeks and the Phoenicians were experts in agriculture. Wine and olive oil were two of their most valued commodities. The Phoenicians, who came from city-states in what today is Lebanon, Syria and parts of the coast of modern-day Israel, were not conquerors but traders. Traders, par excellence. They were on the look-out for tin and precious metals. They founded or visited ports, entrepôts, emporia, all around the Mediterranean bringing with them olive oil, wine, peacock feathers along with a wide range of exotic goods including marijuana seeds. They also transported aboard their ships, plants and agricultural utensils. They taught the local peoples they encountered how to farm and cultivate the products they were trading (not marijuana as far as I know!). Palestine, a neighbouring terrain to the Phoenicians in the Middle East, was renowned for its wines.

It was the Syrians who first put wine into glass containers and the Gauls who invented the use of the barrel. 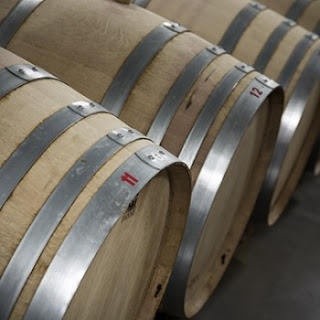 There is some evidence to suggest that the Celts were cultivating grape vines here - vitis vinifera, which is the most common of all grape plants - even before the Phoenicians or Greeks arrived. It is a plant native to the Mediterranean. Cultivars of vitis vinifera are the basis of almost all the wines produced worldwide so this small plant, this liana, has certainly travelled and impacted on cultures everywhere and has been around for millennia, rather like the olive tree.

It is not Bordeaux or Burgundy but Provence that is the oldest wine-growing region in France. The Phoenicians transported wine to trade, possibly also vines for planting, but it was the Greeks who established the vineyards. This means that wine production in southern France dates back 2,600 years. 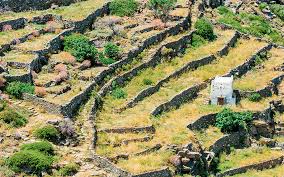 Archaeological remains found in this region indicate that the terraces were handcrafted as early as the 6th century B.C. Irrigation was achieved by the construction of the famous drystone walls. It is possible that the Greeks or even Phoenicians brought this skill to the local people. 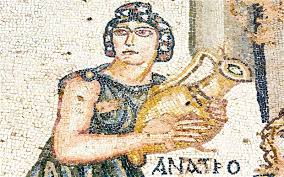 After the Greeks came the Romans who, while empire-expanding, spread the knowledge of viticulture throughout France giving birth to France's most famous wine regions: Bordeaux, Burgundy, Alsace, Champagne amongst others.

After the collapse of the Roman Empire, France's agricultural prowess went into decline. Charles 1, Charlemagne, crowned Emperor of the Romans by Leo III on Christmas Day in the year 800, brought unity to Europe and power to the Catholic Church. The church was involved in the development of viticulture.  Wine was an important part of monastic life. There are many Benedictine and Cistercian abbeys that in their day offered rooms to travellers, spiritual repose and were centres of learning. Hospitality, of course, included food and wine.

Right on our doorstep, a half an hour journey by boat from the old port of Cannes, lies the island of Saint-Honorat. This pretty little island is home to a community of Cistercian monks who grow their own food, keep bees and produce their own wine from eight hectares of vineyard. They have been producing fine wines and liqueurs since the Middle Ages. 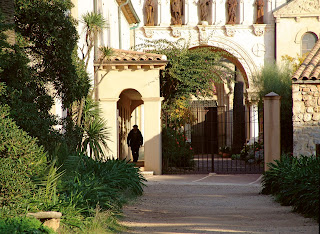 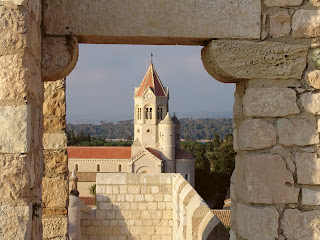 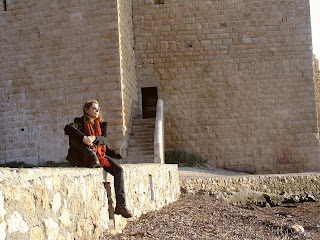 (A little fact about Saint-Honorat Island that always pleases my Irish soul is that Saint Patrick studied here during the 6th century).

The vineyards of Bellet nestle quietly up in the hills behind the port-city of Nice which became a part of France in 1860 when it was ceded from Italy. Nice is the only city in France - aside from one small vineyard in Montmartre in the heart of Paris - to claim vineyards within its city boundaries. This area was once an important viticultural department. This is no longer the case. Still, the Bellet wines are well regarded and sell for a good price. I recommend a visit to the vineyards of the Château du Bellet with its rather lovely private chapel. 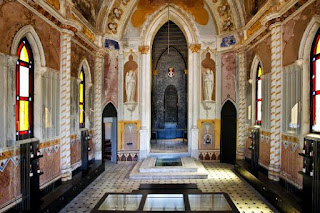 The interior of the private chapel, once part of the family estate of the Château du Bellet, Nice. The chapel has been deconsecrated and converted into the wine-tasting area.

The Château de Bellet is approximately twelve kilometres inland, high above Nice. The vineyards are no longer owned by the de Charnacé family, the ancestors of the Barons of Bellet. The present owner, Ghislaine de Charnacé, grandson of the last Bellet Baron, inherited the estate from his mother Rose de Bellet, whose family gave its name to the local wine. In 2012, the family sold off the vineyards and chapel but not the ancestral home with its round towers and ochre and red façades. The vineyards are now in the hands of a conglomerate, 'La Française Real Estate Managers' - a rather unattractive moniker that conjures up none of the romanticism and history of 'Barons of Bellet'. To be fair, this company has kept the traditions, the local cépages, while bringing its winemaking technology into the twenty-first century.
A day trip from Nice is easy and, when I last looked, you did not need an appointment. Lovely views, four to five degrees cooler than down at the coast and well worth a visit.
By the way, this is an organic vineyard and has been since 2013. 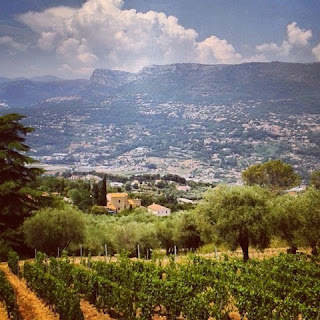 Views from one of the Château du Bellet vineyards.

There are many influences and a wide variety of political histories, Greek, Roman, Catalan, Provençal to name but a few. Each has brought something to our wine story.

Cheers! This is me sipping our homemade orange wine. 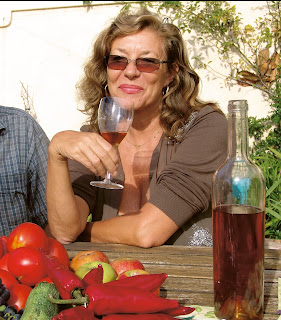 My novel, The Forgotten Summer, is set on an vineyard in the south of France. A French family who fled Algeria after the War of Independence buy a rundown vineyard overlooking the Mediterranean ... 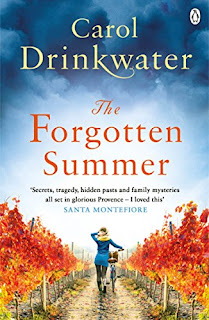 Thank you, Carol, for such an intriguing and in-depth look at the history of wine country origins in the south of France. Two of these wineries are on my list for a visit in September. Peggy Musial.