Leonardo, Cecilia and that "ermine" 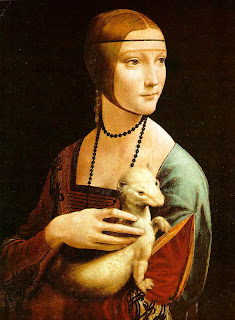 Now that the hugely successful Leonardo exhibition at the National Gallery in London has sold out, it seems as if everyone has suddenly discovered this portrait. It adorns the front of the catalogues and graces thousands of carrier bags and leaflets.

On the day I went, less than a week after the exhibition opened, there was not a single postcard of it to be had. It seems the National Gallery had seriously underestimated the appeal of sixteen-year-old Cecilia Gallerani - if that is indeed who the sitter is.

It is frankly a bit annoying, like when everyone discovers the band or restaurant or city that you thought was a special find of yours and it's no longer your secret. I have known and loved this portrait for half a century; it has always been my favourite of Leonardo's paintings and now everyone else loves it too!

Still, it was very special thrill to be in the same room as Cecilia at last and she certainly lived up to expectations, although the painting is quite small (54.8 x 40.3cm) and was displayed behind glass. This picture was so famous that Bernardo Bellincioni wrote a poem about it not long after it was painted: "Cecilia, today so very beautiful, is she/whose lovely eyes make the sun seem dark shadow."  Funny he didn't mention that she is holding something like a ferret.

Leonardo had wriiten about ermines in his early period at the Milanese court: "the ermine out of moderation never eats but once a day; it will rather let itself be taken by the hunters than take refuge in a dirty lair, in order not to stain its purity."

Moderation and purity are odd virtues to associate with a teenage mistress yet this is what Cecilia Gallerani was: Ludovico Sforza's mistress, he who was Leonardo's master in Milan. She was a middle class girl, educated, with six brothers who took precedence over her and she lost her father when she was seven years old. It is highly likely that her liaison with Sforza began before she was quite fourteen but girls could marry at twelve or thirteen in the late fifteenth century. Indeed Cecilia was betrothed already to member of the Visconti family and had been since childhood - a betrothal that Ludovico dissolved.

But Ludovico Sforza was also a member of the Oder of the Ermine, a prestigious honour bestowed on him by the King of Naples in 1488. So in a sense, young Cecilia is caressing her lover.

In 1491 when Cecilia was still only eighteen and Ludovico had married Beatrice d'Este, she, the "lady with an ermine"  bore him a son. A few years later she was married to a Count, but hung on to the portrait until the imperious Isabella d'Este, Beatrice's sister, required it of her. She died in 1536, in her early sixties, a remarkable instance of survival.

That ermine is a northern variety of stoat, Mustela rminea, which would have had a white pelt in winter. Varnish has discoloured this to a brownish-grey. But it doesn't seem to have much fur at all! I had often wondered about this animal.


The exhibition makes all clear. In the same room as Cecilia are drawings Leonardo made - of a dog's feet, a bear's muzzle - that make it seem as if the animal might be a composite - a sort of fantasy ermine. Cecilia probably didn't have a pet mustelid after all. You can imagine the painter giving her a cushion and saying "pretend it's an ermine, if you would, my Lady."

And yet, and yet, look at her hands and the animal's paws. He is claiming her as she does him; I can't quite give up the idea that Leonardo painted them from life, even though the symbolism is everything.

More than Lisa Gherardini whose portrait known as Mona Lisa the painter kept with him till his death, more than Ginevra Benci or La Belle Ferronière (this last also in the National Gallery exhibition, the teenage Cecilia captivates and enchants the viewer, looking away to her left at something or someone out of the frame, as does the creature she hold so lightly and so securely. Maybe it was Ludovico himself, come to see what the Florentine was making of his young mistress. He can't have been disappointed.

Note: this information can be found in Massimiliano Capati Leonardo: a life through paintings (Mandragora 2009); Charles Nicholl Leonardo da Vinci: The Flights of his Mind (Allen Lane 2004) and Luke Syson with Larry Keith Leonardo: Painter at the Court of Milan (National Gallery 2011)
Posted by Mary Hoffman at 01:01

Fascinating symbolism Mary and yes, an amazing expression on her face... a knowingness yet innocence as well with that slight half smile. You can imagine him standing there.

What a wonderful post, Mary - thank you! I love this painting, but have only known a detail of it - the girl's face plus the animal's head - from a postcard. I had never seen her gorgeous sleeves before! Or known anything about her identity, come to that... Her hair has always intrigued and puzzled me. Does a section of hair really pass under her chin? And if so, what happens to it on the other side? Can any hairstyle expert enlighten me?

Thanks Mary, that was really interesting. I was particularly taken by how beautiful and delicate her hands are.

I first saw this beautiful painting in its permanent home in Krakow many years ago. Still haunting. What was so lovely about seeing it in Krakow (in the early 90s) was the sense of its importance to Poland's national identity and heritage...

I too first saw this painting in Krakow some years ago where I was by myself in a room with her as opposed to being among the press of people in the National Gallery this week. Without the glass barrier the flash of red on the breast of the ermine is more distinct. The words "LA BELE FERONIERE" written in gold at the top left hand corner add to the mystery. She was reputed to be a writer and a poet. I think she's neither looking nor listening to anyone in the room, then or now. She's aware of us, but has removed herself mentally and is contemplating something we will never know.

I've loved this picture for a long time - it's wonderful to find out more about its background; thank you.

I've always been rather troubled by the animal, and having now my own 16-year-old with her own mustelids, I'm even more troubled by it. It's large, its head is not quite the right shape, its posture is wrong... The colour is between summer and winter coat, and the fur short - but it's shorter in summer anyway, and Italy's hot and not very stoat-friendly.

I love the idea that it was probably a cushion, the animal added later!

What a beauty she was. I've not come across this portrait before - thank you for giving us this fascinating description.

The inscription on the portrait, Theresa, was added shortly after 1800 when Prince Adam Jerzy Czartoryski bought it for his mother and it was first hung in Cracow.

It was misleading since La Belle Ferronière is the title most often given to another portrait in the exhibition, of Lucrezia Crivelli, who succeeded Cecilia as Ludovico's mistress.

She also bore him a son.

But there is further confusion because a "cataloguing error" gave this name to Lucrezia's portrait, believing it to be that of a mistress of Frab=ncis 1 of France.

"Ferronière" means either "the ironmonger's wife" (it is unlikely to be a female ironmonger!) or refers to the bandeau-style piece of jewellery she wears on her head.