Boxing Day or St Stephen’s Day (with Good King Wenceslas looking out) is linked to the tradition of landowners allowing their servants to take the 26th off to visit their families. Servants were given boxes containing gifts, bonuses and leftover food. And alms boxes in churches were opened and money distributed to the poor. But as a child growing up in South Africa I recall Boxing Day being the time when the Cape Malays started rehearsing in earnest for the Cape Carnival.
With the summer southeaster tumbling down Table Mountain, I remember the sound of strumming banjos and banging drums reaching a crescendo. The main celebration takes place on the 2nd of January when more than a hundred minstrel troops dressed in dazzling multi-coloured outfits, jump and jive through the streets of Cape Town pumping tiny parasols and crooning in the local dialect that mixes Afrikaans and English. 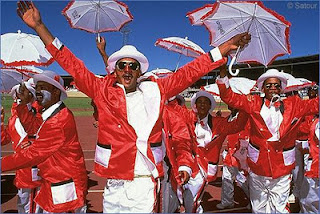 The Carnival started as a celebration of the end of slavery in the Cape Colony on 1 December 1834. Slavery had been abolished in Britain the year before. People taking part in the Carnival can trace their origins back to the Dutch East Indies, Madagascar, India, Ceylon, the Philippines, Japan, Macau and Malacca. They were captured or sent into exile and brought to the Cape to help establish the Dutch VOC refueling station. Collectively the group came to be known as Cape Malay despite their diverse origins.
They were often skilled artisans - silversmiths, milliners, cobblers, singers, masons and tailors and they brought with them culinary secrets that still infuse Cape food and are part of my childhood memories – pickled fish in a fragrant curry sauce served on Friday nights, babotie, minced lamb spiked with almonds and apricots and chutney and covered by an egg custard cream infused with tumeric or saffron, samoosas, the phyllo type pastry triangles filled with curried vegetables and koeksusters, those strands of plaited dough deep-fried and dipped in a cinnamon-flavoured syrup so sweet it put my teeth on edge.
Today a small pocket of brightly painted houses in the heart of the city, called the Cape Quarter, celebrates their culture. But originally many Cape Malays lived in an area called District Six, which was controversially demolished when they were removed to the townships during the ‘apartheid’ era. Since then the area has remained empty - a scar on the mountainside which serves as a constant reminder of an inhuman act. 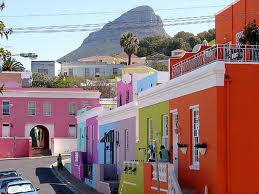 But back to the swaggering troops of my childhood, dancing and singing of hardship and love and rivalry and mocking the men who were once their ‘masters’ and like the griots of Senegal, also singing of history. One of their most famed songs I remember from my childhood is about the day the Confederate ship, the Alabama, came sailing into Cape Town. Roughly translated its first line goes: Here comes the Alibama…The Alibama comes across the sea…
You have to imagine the long, crooning Cape Dialect that pronounced Alabama as Alee baa maa! (as in Obama). I was convinced they were singing about Alibaba flying over the sea on his magic carpet. 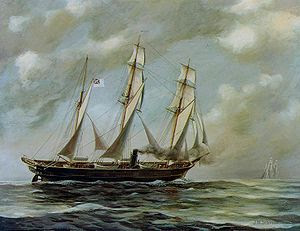 On 5 August 1863, a huge crowd of excited spectators gathered on Cape Town’s Signal Hill to watch the spectacle of the Alabama towing a prize, conquered right in the Bay – a ship called the Sea Bride. In his logbook Captain Semmes of the Alabama wrote that he gave chase to a barque with the United States colours in Table Bay.
The Master might have saved himself if he had stood directly
in for the land; but we ran down upon him under English colours, and he had no suspicion of our character until it was too late. The United States Consul at once protested against our violation of British waters! . . . Put a crew on board the prize (Sea Bride), and directed her to stand off until further orders. The moment the anchor dropped we were crowded with visitors.
As a child I never considered it odd that descendants of slavery should sing of a Confederate ship, nor that the second verse of the song should tell of secret liaisons between slave girls who slept with their masters between the reeds of the riverbed.
So with carnivals and Confederate ships… history is celebrated again and again in the month of December and January in the Cape. 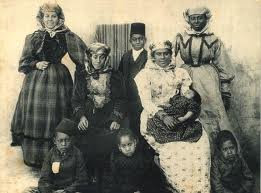 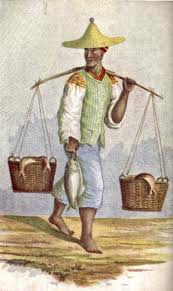 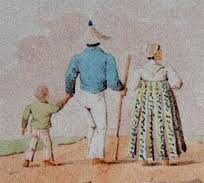 www.diannehofmeyr.com
Posted by Dianne Hofmeyr at 06:00

How lovely that it's Boxing Day and I can sit in bed and read interesting blogs first thing, and even the dog wittering on the other side of the door is no bother, 'cos I've Already Let Her Out. I really enjoyed this, Di, and it points up the oddnesses of human cultural narrative.

Lovely post, Dianne. Hope you have a super rest of the holiday and thanks for the photos etc. Happy Boxing Day!

Thank you all. Leaving in the next hour for warmer climes although hasn't it been marvellously mild this Christmas. Good cheer and great writing ahead in 2012 for all of you!

what a breath of fresh air! Thank you Dianne.