Ted Milligan and Jon England: a response through art to life in the prisoner of war camps: by Sue Purkiss

Sixty seven years ago, just after Christmas in 1944, a young airman named Ted Milligan woke up to be told that he, along with thousands of others, was to leave the relative safety of his prisoner of war camp in Poland, in order to march west, away from the advancing Russians. The prisoners did not know what to expect. They did not know how far they would have to march, or what would happen to them when they reached their unknown destination. They had very little time to decide what to take; those who packed too much soon found they were unable to carry it, and had to jettison the excess along the road. 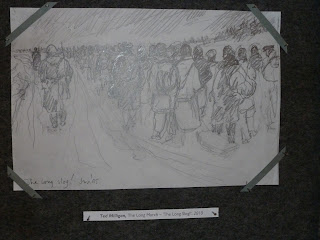 In the terrible, freezing winter of 1945, Ted and his fellow kriegies marched - or stumbled - through the icy wastes of wartime Poland and Germany until eventually, those who survived reached camps in the west, from which they would eventually be liberated. But they didn't know that this was what was going to happen. Rumours were rife. Perhaps they were to be a kind of human shield, a bargaining counter to use against the Allies. Perhaps they were being taken out of the official, recorded world of the camps to be shot. Tiny pawns in the horrific endgame of the second world war, they simply did not know what was planned for them.

Ted Milligan had a gift for drawing, and when he arrived in a POW camp in June 1944 after being shot down over France, he realised that the one thing he now had was 'endless time'. He met an artist called Adrian Heath, and realised that this was his chance; with Adrian's help, he could practise his drawing, using the camp and all that was in it and around it as subject matter.

He wasn't alone in using his time as a prisoner to study and learn new skills. The kriegies got hold of books and correspondence courses from home, they gave lectures and lessons, they put on plays and concerts. As Ted later said about his drawing, all this was 'a means of escape'; not through tunnels, but into an absorbing activity which could take you into another world.

After the war was over, and the prisoners returned to England, it was difficult to adjust. The route that most of them took was to suppress the memories of their time in the camps: they just didn't talk about it. My father, a prisoner for five years, was one of these. For years he didn't talk about his experiences at all. When he did begin to, he would tell funny stories about things that happened, only alluding to the more serious stuff in passing: his face would turn dark and still, and he would come out with things like: 'No-one knows what they're capable of, not till they're up against it.' And then he would fall silent, and you wouldn't dream of pushing it any further. 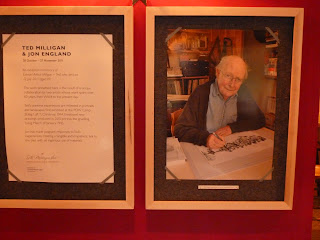 But a few years ago, Ted Milligan met up with a young artist called Jon England, and their collaboration enabled him to open up and explore his memories. He decided he would produce a new body of work based on the march - he had his diaries still to help him. Jon, in turn, wanted to produce his own response, using materials that would have been available at the time - thousands of nails, for instance, to produce an image of Ted in the cockpit of his plane.

I was fortunate enough a few weeks ago to hear of an exhibition of this week, in a pub near Bruton in Somerset. I've previously written a couple of posts (on 16th August and September) which explain my interest in the seldom-heard story of the prisoners of war - I'm in the process of writing a novel arising from my father's experiences. So of course, I was eager to see the exhibition - and it was marvellous. The pictures are from it, and I will attach a link to a video which will give the flavour of it more successfully than I could hope to do.

I have tried to get in touch with Jon England, but unsuccessfully - I hope he will not mind that I have included these images. I don't know if his work will be exhibited in other places, but if it is, I urge you to go and see it. It strikes me that, in a sense, he is doing in visual terms what we as historical novelists do in words: he is responding to an event which happened in the past and which moves him, in the medium in which he is most at ease. I certainly found the exhibition absorbing and moving - and not only because I could imagine that my father could have been one of those bundled-up figures trudging through the snow. Like my father, like so many of that generation, Ted Milligan has now died: but I think it's wonderful that, thanks to his collaboration with Jon, his work, and his experiences, live on.

Fascinating, Sue - and very interesting to see the ways in which people deal, creatively, with dreadful experiences - or just suppress them and live on - and that takes courage, too...

Thanks, Leslie - the drawings were amazing.

Fascinating. I think we've seen so many films set in WWII that we tend to think of it in those terms - slick black and white heroics. It comes as a shock - at least to me - when we're made to realise that, in its different way, it was just as horrific as WWI, and not just in the death camps.
And can anyone count the number of wars we've had since?

Found a quiet time to watch this video at last - the sound is so gentle and soft when there are other noises in the house - but really worthwhile and moving, especially Ted Milligan's description of his drawings as a kind of escape.

I think there are all sorts of silences about that time that are only just being explored - although very little time to catch the memories. Thanks for this post.

Thanks, Penny and Cliff. I think one of the things about the exhibition is that when you're in the 'hut', surrounded by all Ted's drawings of the POWs, you see young men, all vividly individual, and it feels as if you're there, not just looking back.

I saw this exhibition when it came to Shepton Montague and found it very moving. My father in law was also on the Long March, and so it really struck a vivid connection.