From the Sketchbook: Mistletoe 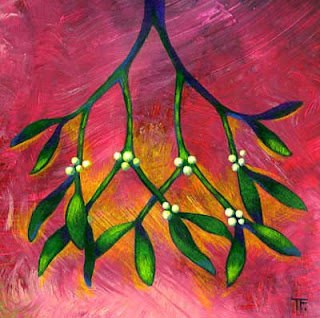 I have never thought much about mistletoe, other than to avoid being caught under it at holiday parties. I knew the Christian belief that Christ’s cross was made from wood of the mistletoe, and that by having a sprig in the home, one was displaying a symbolic crucifix.

A chance encounter with Sir James Frazer’s The Golden Bough, A Study in Magic and Religion, published in 1922, revealed mistletoe’s fascinating history. All Sir James had to do was mention Druids and the Norse myth of Balder and I was hooked. This jolly looking plant, with its green leaves and light berries, is at the heart of epic dramas involving animal sacrifice, great fires, healing, fertility and protection from lightning and witchcraft.

Mistletoe is a parasitic plant that often grows on fruit trees and was revered when it was found on the sacred oak. Because it stays green in winter, even when its host has no leaves, and grows from the tree’s trunk and branches, the ancients believed mistletoe contained the oak’s spirit, held safely in mid-air between heaven and earth. To keep its power as a healing medicine and a charm against glamours and witches, mistletoe could not be allowed to touch the earth. It was hung up in the home or even around one’s neck as protection against evil. Sir James Frazer wrote that in the north of England and Wales, farmers gave a branch of mistletoe to the first cow to calve in the New Year, ensuring good luck for the dairy.

According to an account by Pliny, the Druids carried out a ritual ceremony when they found mistletoe growing on an oak tree. On the sixth day of the moon, they led two white bulls to the tree and a priest in a white robe climbed it, harvesting the mistletoe with a golden sickle and bringing it down in a white cloth. The two bulls were sacrificed and a feast was held under the oak. The Druids then made a potion from the mistletoe as an antidote to poisons and an aid to their animals’ fertility.

Norse mythology gave mistletoe great power over one of its beloved gods. Balder was the beautiful god of light, son of Odin and Frigga, whose blind twin, Hoder, was the god of darkness. Balder was also a seer who experienced extraordinary dreams and could read all runes. When Balder’s dreams deteriorated into nightmares foretelling his death, Frigga drew out a promise from each living and inanimate object in the world that it would not hurt her son. She overlooked the mistletoe plant, however, as it did not seem capable of threatening Balder.

Nothing could now harm the god of light. Balder’s fellow gods enjoyed taking pot shots at him, since no stone or blade could injure him. Loki, shape-shifting trickster god of deception, became jealous and plotted against Balder. In the guise of an old woman, Loki learned from Frigga that she had not elicited a promise from the mistletoe. He quickly fashioned a dart from a mistletoe branch that he stripped of its foliage and berries.

As the gods gathered to throw stones and shoot arrows at Balder for fun, Loki helped blind Hoder throw the mistletoe dart and kill his twin brother. Balder’s body was burned on a huge funeral pyre. Even his family's brave attempt to bring him back from the realm of the dead was thwarted by Loki, again in shape-shifting mode, and Hoder had to pay for his twin’s death with his own life.

The story of Balder is tied in with Midsummer Eve fire festivals in Scandinavia, when the symbolic light of his funeral pyre is brightest. Afterwards daylight diminishes and the seasons progress until once again, mistletoe’s green leaves stand out in the winter landscape.

Teresa Flavin is author and illustrator of The Blackhope Enigma and The Crimson Shard, published in the UK by Templar Publishing and in the USA by Candlewick Press. She is currently at work on her third novel for young people. The mistletoe sketch is ©Teresa Flavin and was done in acrylics on paper.

Wow, that's so interesting! I love ethnobotany - it's definitely under rated.

The Death of Balder is the first story I can remember - my big sister read it to me and it led to a lifelong passion for myths, Norse ones in particular.

Norse Myths Wo-Wo! This is a wonderful and timely post!

And what a superb drawing! I love it!

Love the colours in that picture, Theresa!