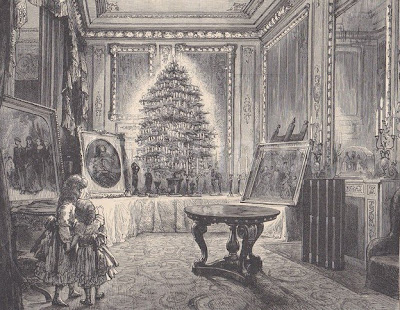 The royal Christmas tree at Windsor Castle
It's sad when Christmas is over, when the tree begins to dry out and die, the branches all drooping, the needles shed over the carpet, and what once glittered and shone with light is discarded for yet another year.

Victoria and Albert enjoying Christmas with their children


It's hard to imagine how devastated Queen Victoria must have felt when, just a few weeks before Christmas, on December 14th, 1861, her beloved husband died. I wonder if the tree had already been set up at Windsor - the seasonal decoration that Prince Albert was said to have popularised, which went on to become the fashionable tradition during and after his wife's long reign.
In the years that followed Albert's death, Victoria still celebrated Christmas, but she could not bear to spend it at Windsor and travelled instead to the Italianate palace of Osborne House on the Isle of Wight. Meanwhile, her eldest son, the Prince of Wales, preferred to spend his holiday at Sandringham, finding Osborne 'utterly unattractive.' 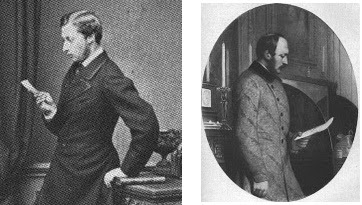 Bertie, the Prince of Wales on the left, and Prince Albert on the right.
But, perhaps an element of guilt influenced the Prince of Wales' decision. Shortly before his father's death there had been a scandal involving the future king and an actress by the name of Nellie Clifton which was much publicised in the press, and which caused his father extreme distress. Albert first wrote to Bertie and then set off in appalling weather to implore his son to behave and change his decadent ways. But the stress of the situation combined with a pre-existing illness - and some say the state of the drains at Windsor - led on to Albert's premature death. 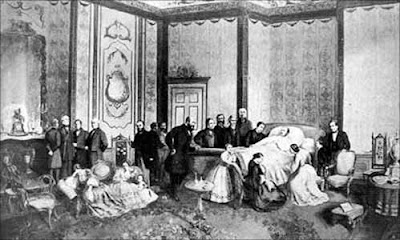 Albert came home and died in the Blue Room at Windsor castle. He was 42 years old. Victoria never recovered from his loss, forevermore blaming the Prince of Wales, writing in a letter to one of her daughters: 'That boy... I never can or ever shall look at him without a shudder.'


To read more about Albert's death, with new research into its probable cause, and the consequences for  Victoria's reign, A Magnificient Obsession by Helen Rappaport has been gaining some truly outstanding reviews.
Posted by Essie Fox at 00:59

Quite a coincidence that you wrote about Albert's death today what with dear old Prince Phillip being rushed into hospital. Sad to think that Albert's life couldn't be saved even at 42 and yet we're not surprised that a 90 year old can have a quick operation and can be expected to recover.
Thanks to Albert for the Christmas tree tradition. I'm off now to start a large family Christmas.

Christmas or not, I'm not sure I want that large a crowd idling around the room when I go. On second thoughts, maybe they are all family.

It does look to be a rather busy deathbed scene doesn't it Penny.

So glad you retweeted this post, Essie. I missed it first time round. Fascinating stuff and I'm glad that Prince P. will be with us for a whole lot longer!

Must read the Rappaport book too!

Do read the Rappaport! I found it very convincing as to the cause of Albert's death. I've never believed it was typhoid.