'Eels and Ely: The Slippery Side of History' by Karen Maitland

We are delighted to welcome Karen Maitland as our guest blogger for December. She has given us a suitably spooky and squirmy post for our month of ghostly Christmas adventures.


Karen Maitland is fascinated by the myth, magic and life of the Middle Ages, which she draws on for her novels. Her medieval thrillers include Company of Liars set in the time of the plague and The Owl Killers about a beguinage, a medieval city of women. Her most recent novel is The Gallows Curse in which a woman is tricked into becoming a sin-eater during the Interdict of King John. Karen is also a member of the Medieval Murderers, six historical crime authors who together write an annual medieval crime novel, the most recent being The Sacred Stone and Hill of Bones.
www.karenmaitland.com


A few weeks ago I found myself clambering over the roof of Ely Cathedral on a freezing winter’s day looking for a convenient place to conceal a corpse – or at least part of one. Before you call the police, perhaps I should explain that this was research for a joint medieval crime novel I write every year with a team of five other medieval crime and thriller writers known as the Medieval Murderers – Philip Gooden, Susannah Gregory, Michael Jecks, Bernard Knight, and Ian Morson. It was not the best day to have chosen to venture up on to a cathedral tower, but I only had one day to do it. It was blowing a gale. My fingers and face were numb with cold and I was trying not to be sick every time I looked down. (I never used to be bothered by heights – is it an age thing, I wonder?) 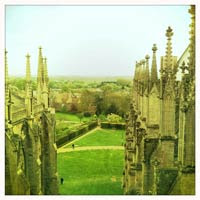 The day before I’d been reading an interview with chick-lit author Victoria Connelly in which she talked about how she did the research for her latest book, ‘A Weekend with Mr Darcy’, by lying on the sofa watching Jane Austen films. I thought of that as I squeezed through an impossibly tiny medieval door high up in a turret and wondered why on earth I’d chosen to write historical novels instead of chick-lit. I too could have been tucked up cosily by the fire with a box of chocolates, drooling over Colin Firth.

But when I did eventually reach the top of the octagon tower, I remembered exactly why I love historical novels. From the tower you can see as far as Cambridge and the shape of the landscape spread out around you for miles. As I looked, the modern buildings seemed to disappear and I saw Ely as they must have done in the Middle Ages: that safe beacon of a hill rising up out of dark and dangerous watery fens. 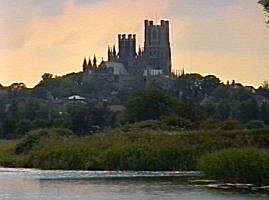 I saw boats on the River Ouse bearing the great blocks of limestone to build the Cathedral and the thousands of live eels in barrels being sent back along the river to pay for the stone. Far below I saw the shadows of chattering medieval pilgrims making their way to the shrine of the 7th Century princess, St Etheldreda’s, and every one of those ghosts had a story that was begging to be told.

But the most magical moment was yet to come. The sun was setting blood-red in the sky as I was travelling home. As I passed a stretch of fenland I suddenly saw a modern eel catcher wading through the water dragging his woven eel traps (eel hives) on an identical boat to one my characters, Raffe, borrows from the eel catcher in my medieval thriller ‘The Gallows Curse’. Except for the eel-catcher’s clothes, it was a scene that hasn’t changed for more than 1,000 years.

Did you know…
Eels, as well as being an important food in the Middle Ages, had many other uses, not least that wives were advised that if they wanted to cure their husbands of drinking too much they should pop an live eel into a flagon of his favourite tipple, leave it there to die, then serve it to their husbands. They were assured he would never again touch a drop of that drink.  I wonder how many husbands survived the shock of that treatment. But if your partner over indulged on the Christmas – you now know what to do come New Year’s Eve. First catch your eel… 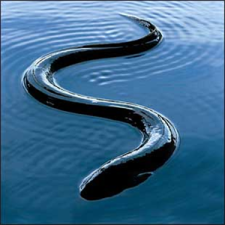 And should you be suffering from aches and pains this winter, eels were thought to be a certain cure for ague or rheumatism. Medieval housewives would advise that you should first cut off the head of your eel – a wise precaution as they have a vicious bite – soften it with fat and stuff it with thyme and lavender, then cover it with mint and bury it in peat all summer. In the autumn dig it up and fasten it above the knee as a garter. It might not go with your party dress, of course.

But even if your New Year’s Party doesn’t involve eels, I wish you all a very happy, healthy and prosperous 2012.


Thank you, Karen, for visiting. 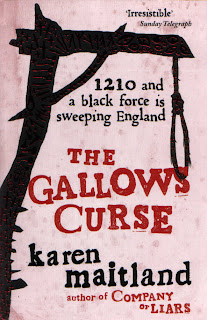 What a great feast of vertiginous, queasy, squirmy delights! And great pictures, too. Thank you, Karen. I'm off to put a dead eel in my husband's bourbon.

Good to read this as I pack my car to head to Ely.

Did you need special permission to visit the roof of the cathedral?

What a lovely surprise to find one of my favourite historical novelists/thriller writers here on History Girls! I have the Gallows Curse on my shelf waiting to be read. I have recently moved to Cambridge and have now visited Ely cathedral and written about the visit but I never got up on the roof... It sounds marvellous but whether I'd have the guts is another matter. Super post. I do not like the sound of those eels AT ALL!!

A scene from my childhood: my mother and I peering into a frying pan in which the skinned sections of the eel my brother had caught in the river that day WERE STILL WRIGGLING...

Wonderful to see you here, Karen - I loved The Gallows Curse,and it was great to get this glimpse of what lay behind it.

There is a definite timewarp feel about parts of Ely, I think - did you see the reenactment a couple of years ago when they had 1st century corracles on the Ouse?

But eels too. There's something of the primaeval slime about them, older than history, older than time. And of course disgustingly sinister. Thank you (I think) for sharing them with us...

Interested to hear of the novel about the beguinages - I've visited a couple in Belgium and thought they looked delightful places to live!

Posts like this one are the reason why I follow this blog. Some months ago a UK colleague sent me pictures of Ely and I have been impressed.
I hope that I will get the opportunity to visit Ely once in my life.

I love to read historicals beside science fiction and fantasy.

Fortunately I belong to the people who do not drink too much alcohol. So my wife do not need me to cure with an eel.

What a lovely blog! Not just the eels; I was recently reading a novel set in 19th C Ely (The Dean's Watch by Elizabeth Goudge), and was looking for photographs of the city on line. Your blog has given me what none of those photos did - as you said, that sense of the cathedral rising up above the surrounding countryside, as Goudge described it in the novel. She lived in Ely as a child, so she knew it well. I must go there one day.
I have never eaten eel since I read the eel-fishing episode in Gunther Grass's 'The Tin Drum.'