Cruising into Christmas, by A. L. Berridge

‘Christmas,’ they said. ‘If you’re blogging on 20th December, it’s got to be about Christmas.’

That seemed reasonable. It was true I was going to be on a Caribbean cruise at the time, but that oughtn’t to make any difference. December may be winter in Bethlehem as well as in England, but Christmas is Christmas the whole world over and has nothing to do with climate. So why did it feel wrong this morning when I stepped off the ship and saw this?


Is it because our idea of Christmas is so inextricably linked to Dickensian notions of snow and winter that we can’t accept it in any other setting? The spirit of Christmas is everywhere in the Caribbean: the churches are humming, little girls in white dresses sing carols, and even taxi drivers call ‘God Bless You!’ quite as unselfconsciously as Tiny Tim could do it. Perhaps what makes it seem so bizarre is only the imposition of our own British (and American) commercial tastes over the top. The steel band in St Lucia greeted us enthusiastically in the 30 degree heat – but the tune they played was ‘Jingle Bells’. The main street of Barbados was exotically festive – but the piped music in the department stores was ‘Winter Wonderland’. The age of global travel may bring us a wonderful diversity of culture, but I think sometimes there’s a danger of homogenization that can swamp the real roots of our traditions and heritage.

That’s part of what I love about studying history. Much of what we do can be seen as reconstruction, the painstakingly recreation of details of a lost world – but some of it is almost the opposite. An archaeologist does not construct a dinosaur’s bones; he blows away the sand grain by grain until he can finally reveal what’s underneath. As a History Girl, I thought that’s what I’d try to do here – to peel away the layers of modern culture in an attempt to discover our real sense of Christmas underneath.

But there’s a snag. While the ship’s library is admirably well-stocked with light reading, there’s a decided shortage of primary historical source material. The internet is available even here on the Atlantic, but after one look at the cost of a minute on the Maritime Network my scholarly instincts began to take a back-seat to those of Scrooge. I decided on a cheaper option - to deconstruct purely on the basis of the decorations on the ship itself.


And it’s all there. Some of it is very modern and commercial, as exemplified by the piles of gaily-wrapped gifts ready for the Santa’s Grotto of the next cruise, but even that is of interest to a History Girl. The tradition of present-giving goes right back to the gifts of the Three Kings, but it’s the details of what was given that tell us most about what it was like to live in a particular age. I was fascinated as a child by Susan M Coolidge’s ‘What Katy Did’ (1872), where the hand-made gifts circulated among the children are listed in loving detail, including pin cushions, a handkerchief – and a mysterious felt object referred to as a ‘pen-wiper’. Even something as recent as Rebecca West’s semi-autobiographical ‘The Fountain Overflows’ (1957) shows a little boy’s excitement at a simple sugar pig, while his sisters eagerly delve in their stockings for the exotic rarities of nuts and oranges we might dismiss today as simply ‘groceries’. Perhaps modern children might feel pity for the poverty of such a Christmas, but I’m not sure I do. The joy of giving was the same - and so was the anticipation and joy in receiving.

I found the same kind of story in studying the menu outside the ship’s main dining room. Christmas has always been a feast, and the nature of the meal tells us only about the prosperity of the period in which it’s eaten. Roast goose or roast turkey might be the staples now, but in the boom of the 1980’s I remember people insisting on prime joints of beef because white meat was simply ‘not special enough’. Louis XIV might well have had roast goose for his Christmas dinner, but judging by the 17th century French cook-book I used to research my second novel, it would only have been acceptable if it was first stuffed with pigeons, then itself stuffed inside the carcase of a wild boar. Louis’ peasants, however, would have considered even a leg of rabbit a luxury, since for most days of the year they couldn’t afford meat at all. The traditions haven’t really changed here, only our means of honouring them.

And yet they have changed – they must have. Gifts and feasting are centuries old, but so much of what we consider essential to a ‘British’ Christmas derives from the 19th century that it is almost as if Dickens invented the concept. Even the Christmas trees with which the ship is forested are a largely German tradition that was only popularized in Britain during Victoria’s reign. My current novel is set in the 1850s, just ten years after the publication of ‘A Christmas Carol’ and the selling of the first commercial Christmas card – but what came before? Little sprigs of holly along the ships’ rails offer the only glimpse of the older time, when the plant of the old Druids’ religion became absorbed respectably into the Christian story, but few outside the universities can explain their religious significance, and it seems unlikely the heart of our popular Christmas is really here.
Then I see it. Tucked away behind a grand coffee bar is this little scene, and at once everything falls into place.


This is it. This is Christmas, right here. Cribs and static Nativity scenes go back at least as far as the 13th century, and the more I look at this one the stranger it begins to seem. There’s nothing new in devotees producing statues and figurines to illustrate their gods and goddesses, but what’s startling about the Christmas scene is its very ordinariness. There’s nothing magic here, only scruffy badly-dressed people sharing a stable with some rather surprised looking animals, but at once it’s something even the poorest can relate to. Louis XIV’s peasants mightn’t have seen much of the goose and even less of the presents, but they could see and believe in this scene – and they could participate in it too. France is still famous for its santons – the little terracotta figures of saints and holy figures produced at least as far back as the 16th century, and now a thriving specialized industry in Provence. 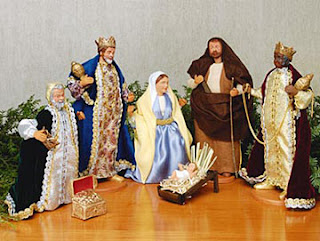 Some of the earliest are only primitive wood-carvings, but produced with love and displayed with reverence - a show of the real Christmas spirit I’ve seen in the Caribbean, in Europe, all over the world, and which owes nothing to fashion, or climate – or time.

Because, as always, it’s the story that’s the thing. That’s a truism, of course, but the Christmas story is an unusual one because in one sense it’s the very first dramatisation of history for education and entertainment.

‘Living cribs’ have been around since at least the 12th century, and by the mid 14th century England was following the German traditions that dramatized the entire Christian Story in a cycle of so-called ‘Mystery Plays’ performed outside the churches. There’d been history plays before, of course, and even Greeks and Romans enjoyed drama about their own heroic roots, but the Christian ‘Mystery Plays’ were the forerunners of modern theatre - realistic, down-to-earth, and often bawdy. I remember being mildly shocked when I first read a scene in (I think) the York Cycle, where Joseph makes some very blunt remarks about Mary’s claims to virgin pregnancy and her relationship with this dodgy bloke called Gabriel. A stand-up comic today might be censured for such jokes – but the 13th century saw nothing disrespectful in them. They were bringing the Christmas story to life, making it real, taking it off its pedestal and helping people understand what its true impact would have been.

And I find that comforting – because on a different, very much lower level, that’s what we try to do too. The key to celebrating the past is understanding it, and that’s certainly what I aspire to in my writing. Those French peasants who crafted the terracotta figurines and arranged them to tell a story were exploring history just as we do, and it’s a tradition to which I can feel proud to belong.

But not too proud. I don’t even want to mention any of my own books today, because that’s not what this post’s about. Today is about Christmas and a story that’s held millions spellbound for more than two thousand years. In that context even thirty degree heat and a chorus of ‘Jingle Bells’ make sense, and so do the most sentimental utterances of Dickens. My cruise is nearly over, I’m heading back to the horrors of winter, but right now I’m raising a cocktail to all the History Girls and all our readers of 2011 - and wishing a Very Happy and Peaceful Christmas to you all.
Posted by K.M.Grant at 01:01

Louise, this is wonderful! You just made another link between Christmas and the Roman Saturnalia, a link which had never occurred to me despite my numerous blogs on the subject. The oldest established Saturnalian presents were sigillaria, small clay, wood, marble or metal statuettes which, when not intended as toys for children, often represented divinities and were placed in household shrines. So not just a link to the creche, but in a way to Christmas cards which we place over our fireplaces.

Such a thoughtful and interesting post about Christmas traditions that the cruise ship and trip almost faded from my mind. Happy Christmas, Louise, wherever you are!

Very grateful to you for taking time to do this interesting post but I'd get back to cruising asap if I were you. Looks wonderful! And What Katy did at school had that super parcel arriving at Christmas, didn't it? Lovely!

I think the lack of a library & affordable Internet for you (sympathies!) has been our gain... What a wonderful idea to scour the ship for different signifiers of Christmas past & present. I've found this eye-opening & fascinating. And just downright lovely reading. Thanks so much!

What a thoughtful and fascinating post considering you were on a Christmas cruise. The weather outside my window looks nothing like your photograph! Enjoy your holiday and thank you.

What a lovely post, Louise - thankyou and a merry Christmas wherever you may be!

Enjoy the cruise, Louise, and thanks for a very interesting post. I 'took a moment' in the middle of all the preparation and did enjoy it.