We had a half-German Christmas when I was a child and teenager; Christmas Eve was special, and the adults always had their presents then, after we'd had a simple meal with fish (always plaice) and sung Christmas carols and lit all the fat red candles on the Advent wreath. When my brother and I were small, we left out pillow-cases in our bedrooms for Father Christmas to fill, and it was only when we were older that we opted for the Christmas Eve Bescherung, or present-giving. On Christmas Day we went to church and sang English carols, and then we had Christmas dinner, with turkey and pudding. I still do a Christmas Eve meal, but my daughters like to have the presents on Christmas Day. But I love the tree, lit up against the nighttime, with all the presents beneath it, wrapped up, pregnant with possibility.

My mother always disapproved of the spindly 'English' Christmas tree we had and told me about the thick, bluish trees she had as a child, decorated with long strings of foil, 'lametta' and white candles. Her stories mixed themselves up with the scene on the Advent calender I had and adored so much I kept it through about six successive Christmases, of a black-and-white German town with a Christmas market and people bringing their Christmas trees and provisions home on sledges, through the thick snow. The first time I saw a Nordmann spruce on sale in this country I bought it at once, and got my mother round to show it to her, and she of course at once headed off and joyfully bought one in her turn.


In my mother's childhood - she's pictured below, when quite small - the snow was probably often grey with pollution from the heavy industry in the mucky Gleiwitz-Zabrze-Kattowitz area of Silesia, where she lived till she was thirteen, but she never talked about that. The fish they had then was carp - it was only when I wrote Saving Rafael and started to ask German friends about their Christmases that I realised how specific to extreme Eastern Germany the carp was, but it was OK for people in Berlin to have it; Berlin was full of Silesians in those days, and Raf's mother came from Breslau (now Wrocław). The carp had to swim in the bath for several days to clean the mud out of its system, and little Gerda felt so sorry for it. I had carp in my grandfather's birth-village of Podgorzyn (once Giersdorf) the summer before last, from the local pond; it was delicious, quite like trout. 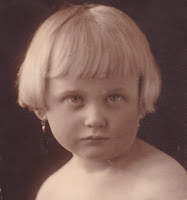 The other thing that was definitely specific to Upper Silesia was something I will be making tomorrow night, Mohnklöße, which in my family was made from white rolls with the crusts cut off, covered in a mixture of ground poppy seeds, sultanas and icing sugar, and soaked in warm milk, then baked in the oven till it's fluffy. It's simple and utterly delicious. 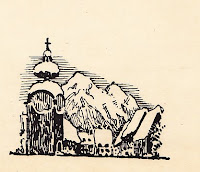 For weeks beforehand, every time the sky was red in the evening, my grandmother told my mother - as she told me and my brother later on - that 'the angels are baking for Christmas.' I used to imagine them in their huge, celestial kitchen, making enormous trayfuls of Lebkuchen and putting them into a massive oven, with big white aprons over their robes, and their otherwise pale faces rosy with the heat. On Christmas Eve the Lebkuchen appeared, many more kinds than you can get in this country, but when I was small my grandfather sent them over, as well as wonderful Lübeck marzipan (like Niederegger).

Later on, the family moved to Graz in Austria, and there my mother, in her memoir, described walking home through walls of thick snow, past the scent of roasting chestnuts, apples, oranges and Lebkuchen, on Christmas Eve of 1939, and walking later to Midnight Mass under the stars, brilliant because the blackout had eliminated light pollution. She wrote; 'Uniforms are very much in evidence this year, but the joy is not yet muted as it will be in years to come.' After that, she stopped describing Christmases, except to say that in 1945, when she'd met my British father and become engaged to him, they spent Christmas apart (maybe he was on duty in the hospital?) But I have the card he sent her that Christmas, which I'm putting up here.

The following Christmas must have been dreadful; turnips for dinner and bread bulked up with sawdust, which blew her belly up horribly, but she ate it all the same. My grandfather was a prisoner - they had no idea where - and she and my grandmother lived in a room with no glass in the windows while outside the snow of that terrible '46-'47 winter landed on the war-destroyed buildings and a wild boar, desperate with hunger, came into Siegburg and chased my grandmother down the main street. Luckily, she got away.

'We look like rag-bags' she wrote in her memoir, 'as we trudge wearily through the snow and ice, with the endless east wind cutting through us like a knife.' People suffered all over Europe from that winter, and millions died of the cold. 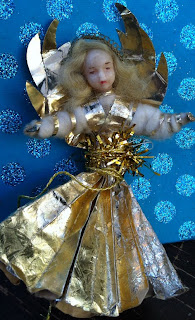 By the time I was born, of course, Germany was prosperous again; the source of the wonderful Advent calendars - which nobody else had in those days - of delicious things to eat and wonderful decorations. The wax-headed angel on top of the Christmas tree, with her foil wings, cotton-wool body bound with gold foil, and drifting golden hair, will go on top of our tree when it gets decorated this afternoon. She came from Germany - I don't know when, but she has topped the tree for as long as I can remember. Here she is, looking rather resigned, having just emerged from almost a year's seclusion in a box.


My grandfather sent us a record of German Christmas carols, too, which began and ended with German churchbells, not mathematical and abstract like British peals, but bundles of sound, musical and mellow. My favourite carol was Süßer die Glocken nie Klingen, (Never do the bells ring sweeter than at Christmas) I had Jenny and Rafael, in Saving Rafael, listen to those bells, ringing out over the ruins of Berlin at midnight on Christmas Eve 1943. I can't paste sounds into this blog, but you can hear the bells at: http://www.youtube.com/watch?v=Z-eg1II_QZ0

Happy Christmas to you all! Frohe Weihnachten!
Posted by Leslie Wilson at 01:00

What a beautiful account of Christmases past and how they affect your Christmas present. I wish I could taste your Silesian dessert - it sounds delicious. And is there a more richly poignant sound than bells pealing out over a city? Thanks to the link to Youtube - lovely way to start the day.

What a wonderful, evocative post - thank you. And the photos... how lovely that you still have that Christmas card sent by your father to your mother... and my daughters this morning were especially interested to see the picture of the doll that sits at the top of your Christmas tree. I was particularly interested to hear about eating carp as an East German tradition - from the brief time I spent living in Prague, I know that it is one shared by the Czechs. They, too, keep the fish alive in the bath. In my ignorance I thought this was solely to do with freshness - but of course getting the mud through its system makes perfect sense. I'm not sure I could get used to seeing Christmas dinner swimming around in the bathroom, though! Despite having no German connections myself, so much of what I love about Christmas comes from German traditions - I love Lebkuchen, and Niederegger marzipan, and gingerbread, and each year my parents send off to Germany for Advent calendars for my daughters and all their other grandchildren (because no other calendars are quite the same). How salutory to hear of Christmas memories of want and hardship as well as joy and treats. Thank you, Leslie - this fascinating post has provided food for thought all day.

Off to listen to those bells - a really fascinating post. Thank you.

My family food traditions have a lot more in common with Czech, Polish, and Austrian food than with what's now Germany. Of course my mother lived in Austria for all her teenage years - but what's more relevant is that Silesia, till it became Prussian in the late 18th century, was part of the Austrian empire. Indeed half of Silesia is in the Czech Republic nowadays, so the Silesian flag hangs in the cathedral of St Vitus, a crescent moon with a cross attached. 'Prussian' Silesia remained a kind of melting pot, where many traditions met, and Upper Silesians, like my grandmother, often had Polish surnames and spoke 'Schlesisch' - a mixture of German and Polish. But I shall be blogging about Silesia in the New Year. It's a shame that Nazi ideology destroyed all that. Upper Silesia was very anti-Nazi, incidentally - but more of that, too, later. But my t'ai chi teachers are Czech, and I discovered from them that, for example, they make potato salad the way we always did, with red peppers, ham, apple and hard-boiled egg in it. It's delicious!

I am glad you will be blogging about Silesia - I look forward to it! I know so little about the history of the region, & would love to understand more.