"Fashes in the Flood" by Penny Dolan

Whenever fierce winds blow, as they have all this December, a particular ghostly ballad haunts me. “The Wife of Ushers Well” is set around one of the old quarter days, Martinmas which comes in late November. It has many other festival links, including its nearness to All Souls and All Saints, but it was also the start of the long Advent fast that once led up to Christmas. 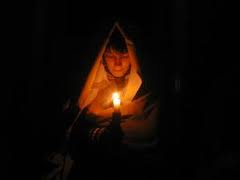 The Wife is definitely a ghost story. However, for me the tale doesn’t centre around the ghosts but around the recognisable rage of the main character, the wealthy widowed mother.

The get-rich scheme she set up for her family has gone wrong so badly and sadly that she turns that hatred outwards.

This mother – or so it seems to me – dominates her three sons, sending them off on a journey where they will do her bidding and bring more riches back home to her. In her pride she forgets that the sea can be hungry but eventually she hears news confirming her beloved sons are drowned.What does she do then, this woman? What would you do if you sent your child off on an errand and something dreadful happened? She does what so many must wish to do. Almost like Lear, she calls all the winds and weather to witness her sorrow. She uses her mystical powers to hurl rain and floods across the land. It is never clear if this is witch-craft and magic or simply the elements responding to the intensity of her rage. At last, some other natural power hears. She knows her sons are coming home again and all is stilled. 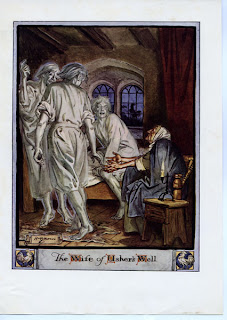 They do come, those ghostly sons, for one calm night. They seem gentle whispering souls. They know where they have come from and how soon their night by the fire will be over.  They witness their mother, in her haze of hurry and delusion, eager to have the fire well lit, eager for comfortable beds to be ready and that all is comfortable for her boys. She even makes sure – or so I read it - that the pretty sweetheart of a servant girl is there to lie beside him. When the cock crows and dawn comes, the three sons get ready to leave once more, knowing that when they depart this time, their sleeping mother’s grief will overtake her mind.
Forget the white sheets and rattling chains and howling in the night of the traditional ghostly story. In this tale, it is the living grief that is horrific.
This is an English version sung by Martin Carthy, one of the great preservers of English ballad history, and a very different Appalachian version. Which do you prefer?
Meanwhile, for those who love to muse on the words alone, here is the text that tells it all for me. :
THERE lived a wife at Usher's well,
And a wealthy wife was she;
She had three stout and stalwart sons,
And sent them o'er the sea.

They hadna been a week from her,
A week but barely ane,
When word came to the carline wife
That her three sons were gane.

They hadna been a week from her,
A week but barely three,
When word came to the carline wife
That her sons she'd never see.

'I wish the wind may never cease.
Nor fashes in the flood,
Till my three sons come hame to me,
In earthly flesh and blood!'

It fell about the Martinmas,
When nights are lang and mirk,
The carline wife's three sons came hame,
And their hats were o' the birk.

It neither grew in syke nor ditch,
Nor yet in ony sheugh;
But at the gates o' Paradise
That birk grew fair eneugh.

'Blow up the fire, my maidens!
Bring water from the well!
For a' my house shall feast this night,
Since my three sons are well.'

And she has made to them a bed,
She 's made it large and wide;
And she 's ta'en her mantle her about,
Sat down at the bedside.

Up then crew the red, red cock,
And up and crew the gray;
The eldest to the youngest said.
''Tis time we were away.'

The cock he hadna craw'd but once,
And clapp'd his wings at a',
When the youngest to the eldest said,
'Brother, we must awa'.

The cock doth craw, the day doth daw,
The channerin' worm doth chide;
Gin we be miss'd out o' our place,
A sair pain we maun bide.'

'Lie still, lie still but a little wee while,
Lie still but if we may;
Gin my mother should miss us when she wakes,
She'll go mad ere it be day.'

'Fare ye weel, my mother dear!
Fareweel to barn and byre!
And fare ye weel, the bonny lass
That kindles my mother's fire!'

Note: Have been triply cursed - by Blogger, by power cuts when editing, and by the Carthy "Ushers Well" video vanishing from all searches. Feel the Carline Wife is alive and still cursing . . . Off to put up boughs of fending greenery,


May you have a much happier and more contented time this Christmas!:
www.pennydolan.com

Those of you who follwed my instructions - which is more than Blogger is doing this morning - will not a small problem. Martin is NOT singing The Wife of Ushers Well on the video! Unfortunately the carline wife herslef has made sure - somehow - I can't get in to remove or correct this. Aplogies!

The link to the intended video is this: http://www.youtube.com/watch?v=EbdTHqlZMZI

What a lovely Saturday morning treat to get three songs for the price of two.

The poem gave me the authentic shivers, Penny! (Let me know if you want me to change anything for you).

I know this song and have sometimes sung it. The line 'fare thee well the binny lass that kindles my mother's fire' is such a poignant farewell to life and love from the young man who is going back to his grave. What a beautiful post, Penny!

'bonny', dang it - why do typos always crop up in the worst places?

I sung this wonderful ballad at The Hurst (Arvon)on Halloween! I love the power of the carlin wife's entreaty to the elements - it is thrilling to belt out. Thank you for posting this.

Lovely, Penny! One of my favourite ballads. I love the American version too.
And it's a bit like the MONKEY'S PAW...you shouldn't wish that folk return to you from the dead as you're even worse off after they leave you the second time, as it were....shivers!

I was there at the Hurst when Phillipa sang this to us. A real shiver up the spine. Such a great lament of loss and longing - wonderful post, Penny.

I was there at the Hurst when Phillipa sang this to us. A real shiver up the spine. Such a great lament of loss and longing - wonderful post, Penny.

I recognise this from an old Steeleye Span record. It's really great to see the full version - somehow, despite being a wordy sort of person, I rarely properly listen to lyrics, so despite all the the times I've listened to the song, I didn't get the whole story till now. Thanks, Penny!

Admire all you wonderful singers out there. A talent my good fairy forgot.

I can only sing in my mind though I have told this ballad with rage and feeling in the tea-rooms of Betty's at York as part of a Ghost Story evening. Somehow - I tried NOT to muse on the contrast too much - the setting and content did not quite mix. It was in an upper room, with marquetry wall panels like those on the Queen Mary liner - not the ship I imagine the sons sent away on.