'A Fashionable Book' by Katherine Langrish 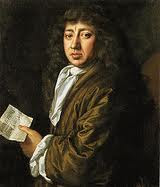 Eager to keep up with the newest things, Pepys promptly went out and bought the first volume for the considerable sum of two shillings and sixpence.  But he was disappointed.  ‘When I came to read it, it is so silly an abuse of the Presbyter-Knight going to the wars, that I am ashamed of it; and by and by meeting at Mr Townsend’s at dinner, I sold it to him for 18d’.  (And that was a loss of a whole shilling!)
HUDIBRAS is a mock epic by Samuel Butler which makes satirical fun of the Puritans and Presbyterians who had so lately held power in England.  It tells the story of Sir Hudibras, a stupid and arrogant knight errant on whom the poet lavishes absurd amounts of praise.  The book was a huge success, with pirated copies and spurious continuations springing up even before the author could bring out the second and third parts.  With Pepys, however, it completely misfired.  He failed to see what was so funny about it. 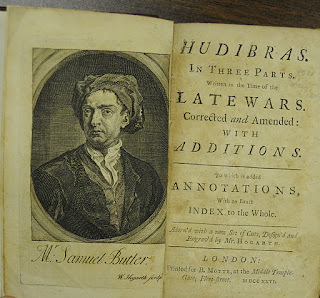 By February 1663, though, poor Pepys was having second thoughts and rather regretted his decision.  Since everyone praised the book so highly, perhaps he had been too hasty in getting rid of it?  Off he went: ‘To a bookseller’s on the Strand and bought Hudibras again, it being certainly some ill humour to be so set against that which all the world cries up to be an example of wit – for which I am resolved once again to read him and see whether I can find it out or no.’
Perhaps buying the book for a second time made him determined to persist, but it didn’t make the task of wading through it any less of a chore.  And now he became more cautious.  Nine months later, on 28 November, he walked through St Paul’s Churchyard, famous for its bookstalls, ‘and there looked upon the second part of Hudibras; which I buy not, but borrow to read, to see if it be as good as the first, which the world cries so mightily up, though I have tried by twice or three times reading to bring myself to think it witty…’
But borrowing it made no difference, either to his opinion of the book, or to his obvious desire that – somehow – he might learn to like what everyone else liked.
For, on December 10th, having decided to spend the immense sum of three pounds upon books, he went back to the booksellers, ‘and found myself at a great loss what to choose.’  His real temptation was to buy plays, but he could never quite rid himself of the feeling that plays were somehow rather sinful, so at last… ‘I chose Dr Fuller’s Worthys, the Cabbala or collection of Letters of State – and a little book, Delices de Hollande, with another little book or two, all of good use or serious pleasure, and Hudibras, both parts, the book now in greatest Fashion for drollery, though I cannot, I confess, see enough where the wit lies.’
By now, Pepys has bought Hudibras three times – even though he simply cannot get on with it.  This goes to show how success breeds success, of course.  Hands up who bought the last Dan Brown just to find out what all the fuss was about?
It would be nice to record that Pepys finally managed to enjoy his purchase, but I fear he never did.  At any rate, the last reference he makes to Hudibras is in his diary entry for January 27th, 1664.  ‘At noon to the Coffee-house, where I sat with Sir William Petty, who is methinks one of the most rational men that I ever heard speak, having all his notions the most distinct and clear; among other things saying that in all his life these three books were the most esteemed and generally cried up for wit in the world – Religio Medici, Osbourne’s Advice to a Son, and Hudibras.’
And there we are left.  Pepys makes no further comment – but can’t you just sense him scratching his head…?
Images:
Portrait of Samuel Pepys by J. Hayls, 1666,   National Portrait Gallery

Posted by Katherine Langrish at 07:00

I can so relate to this! Especially the bit about feeling to have to read something that everyone is talking about.

That's why I ended up buying Labyrinth. But not twice more!

Yes, I've been there too. I even struggled with Hudibras - though I loved Religio Medici from the off. (Haven't tried the Osborne yet.)

The classic text I bounced off hardest was probably Herzog - but I'm glad to say it was a library copy.

This is such a lovely post about poor Pepys, Kath, especially when one knows about being lured on in the same way by a much-spoken-about title.

Even, I fear, to recognising the implicit nodding of head and biting of tongue in front of the respected and rational Somebody.

Plus ca change, plus c'est la meme chose! I so enjoyed reading your post about the perplexed Pepys - I certainly have a pile of books belonging to the what-is-the-fuss-all-about category? But my loss is Oxfam's gain...

What I rather liked about this was Pepys' humility as a reader. You feel he has this awful suspicion that there's something wrong with him for not liking Hudibras - that it's not the book's fault, but a fault in his own taste. And so he keeps trying...

Or was it really only a wish to be in fashion?

I read Midnight's Children twice...for much the same reasons.

I didn't buy Dan Brown's book to see what all the fuss was about--but I know people who did. Those same people then said they couldn't understand why the book was selling so many copies. No, really? No clues from your own experience at all, then?

We're social animals so jumping on bandwagons comes naturally to us.

The fashion industry is a booming one and with everyone trying to chase after it to keep up with the latest trends, it can get a little tiring with the amount go magazines to refer too, the entertainment to watch and a whole lot of money to fork out simply because that top is simply too gorgeous