I wanted to be a warrior princess... Katherine Roberts

﻿﻿﻿You know how some authors always seem to be writing the same story? I don’t mean sticking with a single book or series, though this happens. But often we might use different characters, plots, settings, experiment with different genres and age groups, or even write to someone else’s brief, and yet the same THING always fights its way out of the pages. Cleverly published, an author’s THING becomes their "brand”, but it can take some time to find.

All of the authors on this blog are "history girls", of course. Yet history is a very wide ranging genre, especially when you venture into legend and myth, and although I've written books with historical backgrounds, I don't think "history girl" really describes me. (Mary will probably throw me off this blog now!) All my work has an element of magic, which puts me firmly on the legend and myth side of history, and I write for young readers so story is always more important than hard fact. But I never thought I had a THING until I got as far as formatting my latest Seven Fabulous Wonders title The Amazon Temple Quest as an ebook and realised that warrior princesses keep fighting their way into my pages in true Xena style. 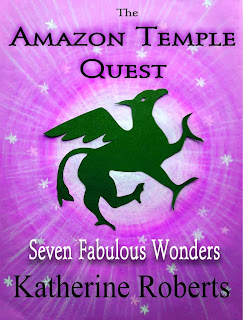 In The Amazon Temple Quest, my warrior princess is called Lysippe. She is the youngest of her tribe, last of the legendary Amazon warrior race, on their way to join King Philip of Macedon’s army for his coming Persian campaign. They are also on a quest (hence the title) for one of the lost “gryphon stones” of their people, which ward off death. Before they reach Macedonia, however, Lysippe and her sister Tanais are captured by slavers. Tanais is badly wounded, leaving Lysippe to lead a daring escape attempt during which the runaways seek sanctuary in the Temple of Artemis at Ephesus, one of the Seven Wonders of the Ancient World.


Needless to say, Lysippe and Tanais are not your typical fairytale princesses with jewels in their hair, batting their eyelashes at handsome princes. They owe a fair amount to Xena, since their tribe lives without men. I located their home on the Scythian steppe, after reading about a grave discovered in Kazakhstan containing the bones of an unusually tall warrior queen buried with weapons. They wear leather leggings, carry half-moon shields, ride horses, and are armed with bows and arrows. But in keeping with the myth element of my Seven Fabulous Wonders series, the amazons in my book also have magical powers.


Seven are the signs of a true Amazon:
the yellow glare,
the sleep that heals,
a fighting spirit,
a blinding shield,
birth without man,
death without pain,
and the power to command a gryphon’s flame.
Yet they are vulnerable too, since despite being warriors they are not as physically strong as men. Here Lysippe has ridden out alone after arguing with her sister, and has just been captured by the slavers, who mistake her for a village girl…

She took deep breaths as her captor crouched before her and removed his helmet. He had pale silver hair and grime on his cheeks where dust had built up under the bronze. A jagged scar split his forehead above his left eye. Most unsettling of all, he had no eyebrows or eyelashes so there was nothing to soften that cold, blue glare. Lysippe made herself meet his gaze, though she still felt queasy from the pain in her ankle, and the bruises she’d suffered in her fall were beginning to hurt.
He fingered the worn leather of her leggings. “Where are you from, slave? Where did you steal that horse?”
“I’m an Amazon!” Lysippe said, trying to sound braver than she felt. She peered past him to see what had happened to Tanais. “Northwind’s mine – I didn’t steal him. And my mother and all her warriors are on their way back, so you’d better let me go!”
The men who had stayed behind laughed.
“Don’t lie to me, slave!” her captor growled. “Everyone knows Amazons are extinct.”

I've sneaked warrior princesses into other stories, including a short tale about Queen Boudicca's daughters that got shortlisted for the Library of Avalon Geoffrey Ashe Prize, and you might have noticed the Amazon queen made a brief appearance in "I am the Great Horse", my story of Alexander the Great from the horse's mouth (now sadly out of print in the UK).

Ten years later, and a slightly younger warrior princess has inspired a series of her own... King Arthur's daughter Rhianna Pendragon, whose first book Sword of Light comes out in February 2012 from children's publisher Templar for readers aged 9+. I'm quite excited about this, because for the first time my warrior princess has fought her way on to the cover. And although we are being careful not to make the book appear too girly in case boys are put off by that, Rhianna is very much the heroine.

﻿﻿
You'll be hearing much more about Rhianna Pendragon next year, since Book 2 is due out at the end of 2012 and I am currently writing Book 3 in the series, but I hope you don't mind me giving you this little pre-Xmas taster to prove that you don't have to own a Kindle to read my work! I know you must be beginning to wonder... but this is not the place for lengthy explanations of why authors "go dark", so I'll save that for another day.

While inhabiting very different books and stories, all these warrior princesses have something in common. They are strong and brave, they ride horses and brandish swords and take on the men at their own game. They do not expect a handsome prince to fight their battles for them (although they wouldn’t say no if a prince happened along... with the possible exception of Xena, of course!). Yet they are not just sexier versions of kick-ass male warriors, as so many heroines written by male authors tend to be. My warrior princesses seek spiritual fulfillment as well as power and glory, which is an important element of my own writing as I swing my pen - or keyboard - instead of an imaginary sword.

The truth is I wanted to be Xena when I grew up… does that count as an author THING?

The Amazon Temple Quest ebook is now available at the promotional price of 99p until Dec 31st.

You can preorder Rhianna Pendragon's first adventure "Sword of Light" here (or, better still, wait until it comes to your local bookshop since this one will be a REAL BOOK - and a very beautiful one, too!)

Very good to see you back in the light, Kath! Sure Rhianna will be a marvellous heroine.

Thank you Adele! Rhianna P is certainly being very demanding at the moment...

With you on the warrior women bit - love them too. Sure the new books will be a great success.

I have just started reading my proof copy of Rhianna P, and can confirm she is a terrific heroine. The cover is beautiful too.

Yes, Templar do some great covers, don't they? I love the artwork for "Sword of Light" (this is an early mock-up and I haven't seen the final version yet - but understand it will be shiny!)

I hope you enjoy the read, Michelle. Nervously biting my nails now...

That means Lysippe and Tanais are related to my girl Halo - ! http://www.louisayoung.co.uk/halo_content.html

I wonder if there are any other sneaky relationships going on between characters in History Girls novels? (Those Tudors must have some skeletons in their closets...?)

I loved the fighting princess in The Water Margin - with two swords, no less! Let's have more of them.

Rhianna only has one sword, but it's a magic sword, so maybe that's as good as having two?

It was an interesting program and it had the best plot: a warrior women,!