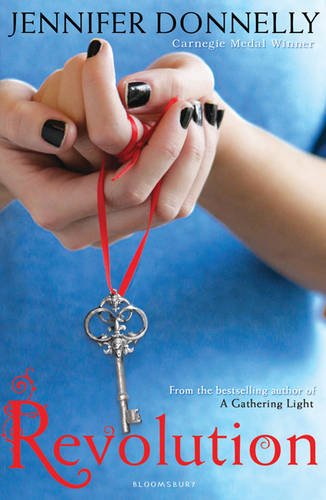 Two girls are united in a quest to save a young prince, but separated by over two hundred years. Andi lives in present-day New York and is haunted by the memory of her younger brother’s death, while Alexandrine is desperately trying to save the young Dauphin from death and despair at the hands of the revolutionaries. The stories become tangled, across the centuries, in a complex tale of love, guilt and loss.

In the aftermath of the loss of her brother, Andi’s family and her life have fallen apart. Neither she nor her mother is functioning, despite their gifts. When Andi’s father insists on her accompanying him to Paris, she discovers the diary of a girl who, just like her, tried to save another innocent boy. The story unlocks Andi’s own grief and
suffering and helps her confront the issues of life and death in new ways.

Like Sally Gardner, Jennifer Donnelly has looked to the era of the French revolution for her second historical novel for young adults. It’s not difficult to understand the appeal of this
particular place and time: in the chaos and blood lust of the revolution, we see civilisation both at its most idealistic and simultaneously at its most brutal and self-destructive. To watch the ideals of liberty and equality turned by those grasping for power into a blood bath is a sobering study in humanity, or rather in its failure.

As readers of A Gathering Light will expect, Donnelly writes with superb talent and depth. There are no clichés or easy answers to be found here. Revolution is an unflinching confrontation with human loss and cruelty. Both Andi’s and Alexandrine’s tales are compelling and engrossing. Like
any account of the French revolution, it’s not for the faint-hearted. Andi’s own world and inner thoughts too, are dark and bleak, as she walks the thin line between survival and self-destruction.

The narrative moves between the lives of the two girls; the two centuries. Often the current story feels too compelling to leave, but the reader is swiftly caught up in the parallel one again, until ultimately the two stories merge unexpectedly. Both are centred on a heart; a loss; the death of a child. And both are connected by music.

This is a remarkable tale and draws to a satisfying conclusion. The shadow of the dark events of the revolution is still there, even in the sunshine of the ending, however, because for most of the characters, there was no happy solution.


In Revolution, Donnelly shows once again that she is an exceptionally talented writer. Readers can expect this to be a darker, more disturbing tale than her first novel, and no less haunting. Highly recommended for older teens and adults alike.


Visit us tomorrow for a chance to win one of five copies of Revolution by answering a simple question.
Posted by Marie-Louise Jensen at 01:01

Thanks for this review! I loved this book as well. Jennifer D writes too slowly for my liking....

So glad you reviewed this! I could never decide what my favourite book was until I read it...in fact it was the very first book I reviewed on my book blog! http://twinsisterbubble.blogspot.com/

Omg omg. Gathering Light is one of my all time favourite novels. I wasn't so old about the Tea Rose books, but thank you for the notice re a new J. Donnelly - an auto buy for me.

Great review. I loved Revolution - does both timelines brilliantly.

Hi there, I found your blog via Google while searching for such kinda informative post and your post looks very interesting for me.writers have great importance in the writing company because they are the ones who solve customer's problems with respect to their needs.