A Trip to the Sir John Soane’s Museum 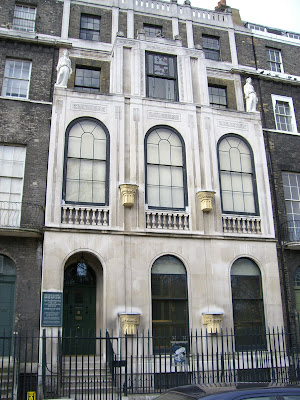 Our excuse was a group visit to the home of architect Sir John Soane – which has been preserved and renovated to appear as it would have done at the time of his death – and it is my personal take on the museum which is the subject of today’s post.

Ten years ago I told a friend that I was starting work on a children’s novel set in eighteenth-century London. She immediately said: I will take you to the Sir John Soane’s Museum in Lincoln’s Inn Fields – you will LOVE it. So she did, and I did, and I have done ever since. In fact, the dates didn’t quite fit in with my fictional narrative but Lincoln’s Inn Fields itself became a setting which I returned to in all three volumes of The Gideon Trilogy. When I subsequently found both a literary agent and a publisher within minutes walk of the museum, visits to the S.J.S.M. became a regular event and it won a firm place in my subjective London atlas. As a novelist rather than an historian, it is less the detail (and heaven knows there’s enough detail here to satisfy anyone) than the spirit of the place that keeps drawing me back. It is a unique space, a London gem, a step back into the home and mind of a great English architect and inveterate collector of artefacts.

As far as I am concerned, London is a never-ending source of wormholes to the past: to walk this city’s streets is to be part of an historical continuum that in varying degrees fascinates, illuminates, humbles and occasionally disappoints (though, as that great biographer of the capital, Peter Ackroyd, asserts, London always survives). So, in the midst of such riches, why should you divert from your path in order to visit the Sir John Soane’s Museum? In no particular order, here are some of the reasons why I suggest that you should: its perfect situation, on the north side of Lincoln’s Inn Fields; the iconic yellow drawing room with its delightful views over the square; the astonishing folding Picture Room (Soane’s ingenious solution to running out of space for his paintings was to insert some extra ‘walls’ and put them on hinges); Soane’s collection of Hogarths (The Rake’s Progress and The Election) and his Canalettos (views of Venice); the Crypt crammed with treasures from the ancient world; Soane’s use of glass, of convex mirrors, and his opening up of dark spaces in order to create effects with light; the juxtaposition of the domestic with the astonishing, cluttered legacy of one of the world’s great collectors of artefacts, ancient and modern. The house is such a tardis: so packed with fascinating objects you always leave vowing to come back, yet it is small enough for you to appreciate properly in one visit. Here is a link to the museum’s website which will give you a taste of the delights contained within its walls – although is absolutely no substitute for going there in person: 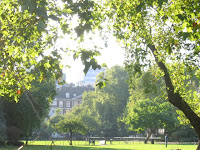 Photograph of Lincoln's Inn Fields by Stephen Craven for the Geograph project. 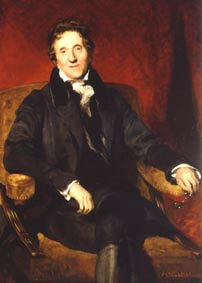 This benign and kindly face belongs to Sir John Soane (1753-1837). Apprenticed to the architect George Dance, he studied architecture at the Royal Academy and won a travelling scholarship that allowed him to spend two years in Italy which engendered his lifelong appetite for collecting all things classical. His commissions included the Bank of England, the Dulwich Picture Gallery and the Holy Trinity Church at Marylebone. Over the course of his lifetime he acquired and rebuilt three adjacent houses, 12,13 and 14 (in 1792, 1813 and 1823 respectively), and constantly reworked his home and reconceived his displays of artefacts. Before his death he established his home as a museum by Act of Parliament. As Professor of Architecture at the Royal Academy, he used his displays to teach and test his pupils’ knowledge of classical art and design. 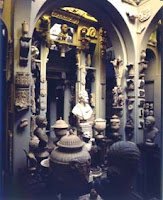 Aside from the extensive collections which Sir John Soane amassed (Greek, Roman and Egyptian antiquities, terracotta and bronze artefacts, reliefs, stucco fragments, sculpture, death masks, paintings, sketch books, etc, etc, etc – pity the poor archivist), the museum gives a wonderful insight into domestic life at Lincoln’s Inn Fields in the early nineteenth century. Susan Palmer, of the museum, has written an excellent account of this in her book: The Soanes at Home (a volume to which I have turned in my research and would highly recommend). Drawing on and reproducing original documentation from the museum archives, it is a wonderful source for understanding just how a house was run at this period: the servants, the plumbing, the heating, the cooking, the laundry, mealtimes, the delivery of coal and milk, and so on. (Incidentally, for younger visitors, Fanny, Mrs Soane’s dog, gives a charmingly illustrated account of life at numbers 12 and 13 Lincoln’s Inn Fields in her book, The Journal of Mrs Soane’s Dog Fanny, by Herself, written by Mirabel Cecil and illustrated by Francesca Martin. Both books are available from the museum.) 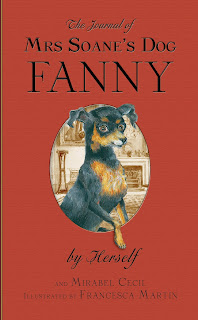 Scaffolding currently envelops Sir John Soane’s home and this is because the museum is undertaking a major project – due to be completed in 2014 – which will restore the entire 2nd floor of no. 13. Visitors will be able to view Soane’s private apartments: bedroom, bathroom, oratory, Mrs Soane’s morning room and her husband’s architectural models room. These exciting renovations will cost £7M. £6.5M has already been raised. If anyone would like to help with the remaining £0.5M, follow the link:

You can visit the museum in the evening, by candlelight, on the first Tuesday of the month, and, for a princely sum, you can also hire the museum for events. I must admit that my ultimate venue for a book launch has long been Sir John Soane’s dining room and library by candlelight. Future publishers kindly take note...

Oh-I do wish I'd been able to join you for this...will definitely be making a visit.

Yes, it was a wonderful visit. I'd never been to the John Soane's Museum before - but what a treat. One of my strongest memories was when a guide told us that Sir John used his house as an educational tool for his architectural students and would point to an object or a small section of a frieze and ask them to tell him where it came from. A rather terrifying examination on the hoof.

It was a memorably trip for this "Soane virgin" and I shall often dream that immense Sarcophagus of Seti 1 and how we feared that the urns and statues might topple down on us from above!

And funny that you should mention Charles Dickens; I have just blogged about him over at Http://bookmavenmary.blogspot.com

I hadn't put two and two together about Lincoln's Inn and Mr Tulkinghorn.

I've so appreciated the photos and posts about the John Soane's Museum. You guys are making me so jealous that I wasn't able to be with you on that trip. I'm enchanted with the thought of a visit by candlelight.

It was a super trip and this is a marvellous account of it!

Thanks so much for these comments - I am so sorry that the trip was so London-centric. I am sure that this will be rectified in the future! Mary - I have just read your post on Dickens which I enjoyed hugely. I came to him late in life - owing to the copies of Dickens we had when I was a child being in such small print and smelling so musty it put me off. Now he is fast becoming a hero and all the more so having seen Claire Tomalin speak about him at Goldsmiths the other day. Flaubert? Bah Humbug!