The Colourful Life of Victoria Woodhull by Essie Fox 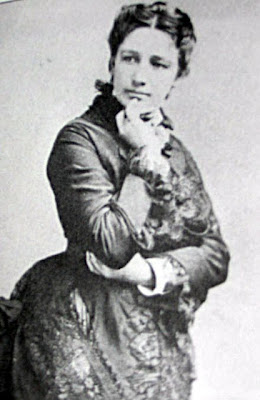 I came across Victoria Woodhull when researching Victorian spiritualists. I'd never heard about her before, and yet in 1872 she stood for the American Presidency. Not that she met with any success. At that time women had no legal vote and, on the day of Grant's re-election, his female rival was locked up behind bars on charges on libel and pornography.

But what had preceded such ignominy? 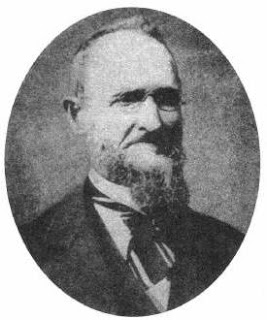 Born in Ohio to a family of shameless rogues, much of Victoria's early life was spent as a travelling preacher as part of her father's snake oil show. Always having been charismatic, with a talent to draw a crowd, the girl would pray and tell fortunes, claiming that she had the power to cure while her father - the one-eyed Reuben 'Buck' Claflin - stood at the back of his wagon and sold bottles of home-made medicine, the patented, opium-based Life Elixir.

At the age of fourteen Victoria fell ill, driven to the point of exhaustion after being deliberately starved as a means of enhancing her spiritual visions. She also claimed much later on that her father had sexually abused her when drunk and then tried to sell her as a whore. But then, she would soon enough be seduced when, during her convalescence, she was wooed by another fraud, this time an apparently well-to-do doctor known as Canning Woodhull.

Canning, who was then twenty-eight, asked for Victoria's hand in marriage, offering the girl a means of escape from her father's tyrannical grasping ways. But once again she was misused, for her 'doc' was no more than a worthless quack, an opium addict and womaniser who could not support his child bride and who was so drunk at the birth of their son that Victoria very nearly died, blaming her husband forever more for causing her son's severe mental impairment.

When contemplating returning back home Victoria came to realise that her role in the Claflin travelling show was had been taken by her sister, Tennessee. So, with husband and idiot son in tow, she set off for San Francisco, hoping to realise a dream that began when she was very small when she claimed to have had a vision in which the Greek orator, Demosthenes, foretold of her glorious destiny to lead the American people and to live in a city of ships and gold. San Francisco certainly fitted the bill, being the scene of the Gold Rush and also a sea port town. But all hopes of success were very soon crushed when Canning spent every cent he owned in drug dens or on prostitutes, and Victoria was left with no other choice but to support her family alone, working as a cigar girl in a bar, as an actress, and probably a whore.

Returning at last to Ohio, rather than joining Buck's latest venture (which was running a dubious hospital with his services being advertised as 'America's King of Cancers) she made other plans with Tennessee; the sisters working as spiritualists healers - though many have since come to suspect that they offered more physical sustenance too. 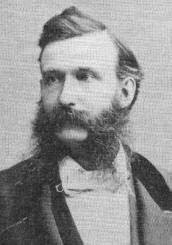 
It was while working in such a trade that Victoria met Colonel James Harvey Blood - a glamorous Civil War hero who shared her belief in 'other realms' and supported her destined future role as the leader of America. Leaving his respectable life behind, along with a wife and children, he joined Victoria and Tennessee when they ventured to make their mark in New York - another city of gold and ships.

At first times were very hard but the sisters' spiritualist business was soon being bolstered by the sale of contraceptive devices to prostitutes. Meanwhile, Blood was often absent, spending time with his brother who ran a newspaper business and there learning all the tricks of that trade such as publishing pamphlets and magazines which would bolster Victoria's future aims when she set her cap at the presidency. 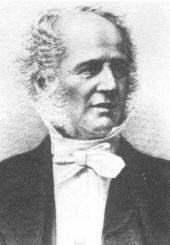 Before that, Buck Claflin turned up again. Having heard that the widowed Cornelius Vanderbilt, who was then America's richest man, was seeking the service of mediums, Buck contrived for the old man to meet with his daughters, after which matters rapidly progressed with Victoria become Vanderbilt's medium, and Tennessee established as his mistress. The sisters also offered financial tips, said to have come from the spirit world, but in truth only garnered from bankers who gossiped when visiting brothels. When the tips proved to be correct, Vanderbilt rewarded the women well, and with extra funds to support their cause they went on to cause a public sensation when establishing themselves in financial realms as Wall Street's first female brokers. 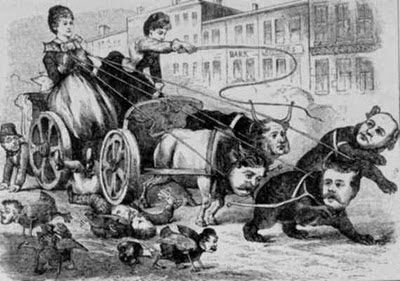 That enterprise brought further wealth and, with the aid of Colonel Blood, they founded a spiritualist newspaper, Woodhull and Claflin's Weekly, which soon became their political voice - and that voice was to reach a great many ears with the religion of Spiritualism being very widely followed then and offering a platform from which women's views could be expressed. 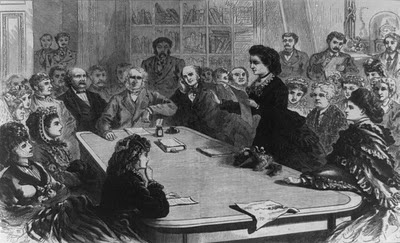 
Hosting spectacular salons, Victoria soon courted the Women's Movement who supported her bid for the presidency. She lectured to enormous crowds beneath the popular banner of universal suffrage and equal rights. And then, in 1871, she made her way to Washington where she went on to petition the House at a Judiciary Committee. 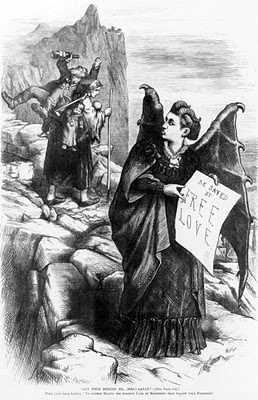 
But her hopes began to crumble when Buck's criminal antics were raked up by the press along with salacious tales of her past. 'The Woodhull' was demonised and called Mrs Satan, and a crippling series of court cases led to her being sued and imprisoned. What's more her views regarding free love caused even more cases of social offence when combined with an ill-advised love affair with a married newspaper editor by the name of Theodore Tilton. 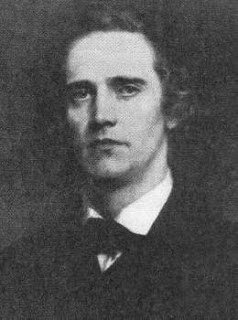 It was a complicated affair. Like Victoria, Tilton believed in free love (although at the time this really meant the chance for women to decide whether or not they wished to divorce, and which men were their sexual partners, with Victoria also keen to expose the hypocrisy of many men who in private paid for prostitutes while speaking against them in public). Tilton's wife, who was called Lib, had been sexually involved with their friend, Henry Ward Beecher, a clergyman of great influence who had sworn to support Victoria's work. But when he went on to have second thoughts she swore to take her revenge, exposing his adultery with Lib - only to find herself involved in the 'Trial of the Century', from which Beecher was to emerge unscathed while the Tiltons were socially disgraced, and Victoria was viciously portrayed as a promiscuous pornographer. At the end of the trial she was ruined - politically, personally and financially. 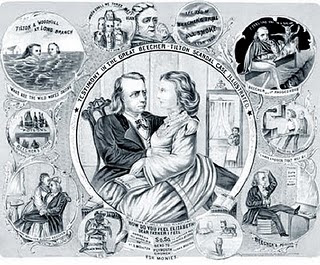 Cartoon showing scenes as described in the 'Trial of the Century'


Her salvation came from Vanderbilt. When the old man died his heirs had been keen to hush up the truth of their father's past, and so offered Victoria and Tennessee a generous financial settlement - but only if they left America. It could not have come at a better time. Ever optimistic and enterprising, the two made their way to London, another city of gold and ships in which they reinvented themselves. Tennessee married a viscount and became known as Lady Cook while Victoria married John Biddulph Martin, a bachelor merchant banker. When he died, she was heartbroken - but rich - and withdrawing to their country estate she became a passionate motorist, founded a women's agricultural college, a village school, and a country club - at which Edward, the Prince of Wales was rumoured to be a visitor. 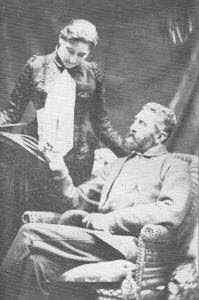 The respectable Mrs Biddulph Martin, posing with her husband

I wonder how Victoria felt when, at the age of eighty, universal suffrage was finally won. Certainly, at the time of her death she asked to be remembered thus -


'You cannot understand a man's work by what he has accomplished, but by what has overcome in accomplishing it.'


I admire Victoria Woodhull. In her own way she achieved so much. She overcame many difficulties. She was one of the brave Victorians who lived at a time when women were seen as no more than their husband's possessions. She paved the way for equality - though who knows when her dream will be realised - when a woman will enter the White House as the president of America.


Victoria Woodull led an amazing life of which only the surface has been touched here. For further reading I can thoroughly recommend 'Other Powers' by Barbara Goldsmith and Mary Gabriel's 'Notorious Victoria'. For younger readers there is Kathleen Krull's 'A Woman for President' with wonderful watercolour illustrations provided by Jane Dyer.


Essie Fox's novel The Somnambulist is a Victorian gothic mystery. Her second historical novel which is called Elijah's Mermaid will be published this coming November.

What an amazing story, Essie. Thanks for this...and sorry not to have seen you in London yesterday.

I'd like to add a piece of trivia, but in the preview, the lines all overran, so I'll post this first and see what it looks like; and try again!

Many apologies - a bit long, and possibly horribly formatted, but I love this glimpse of a chance encounter between two brave 19th-century American women.

'We were not sorry to take the 6 P.M. train for New York -- the ride in the cars was long, but extremely agreeable, and besides we had the honor and pleasure of making the acquaintance of Miss Clafflin, the notorious "female broker" of New York -- a fussy, pretty, talkative little woman, who discussed business extensively with Oscar, and entreated me not to fall into the useless degrading life of most married ladies-- but to elevate my mind and turn my attention to politics, commerce; questions of state, &c. &c. I assured I would do so -- which assurance satisfied her quite. -- Reached the city at midnight.'

I do hope that Victoria read Kate's 'The Awakening' nearly 30 years later!

How wonderfully interesting! Thanks for a great post, xc

A fascinating woman - thank you for introducing me to her!

What a wonderful woman - but how much she suffered! I'm glad she found a safe haven in the end. And though women have the vote, we have yet to see a woman President in the US..

Thank you! I think Victoria was an absolutely astounding woman and am simply amazed that we don't know more about her.

Pam - how exciting to read that diary snippet. Thank you SO much for posting it! I think Miss Claflin would be Tennessee (who was Victoria's partner in the brokerage firm). She was darker, smaller and prettier than Victoria - but I think, in person, Victoria must have been incredibly charismatic. She certainly managed to charm and talk her way into the most unlikely of situations.

Such absolute energy and determination to rise against trouble and keep going! Reading Victoria's most interesting life, what strikes me is how her whole drive was towards sexual equality rather than hypocrisy. Thank you for suggesting further reading - including "Elijah's Mermaid".

Thank you for the interesting piece!