On a morning in January when the snow was receding but still around on the ground, I visited Great Shelford. As I got off the bus, I admired all over again the little pink Post Office. 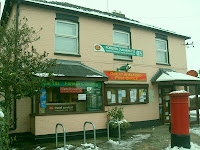 Then I made my way to Woollard's Lane, and turned right to walk down to our beautiful state-of-the-art small library. 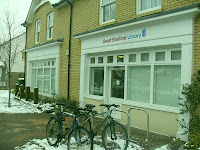 Next door to the library there's a delicatessen, the Shelford Delicatessen that houses both a wonderful restaurant/cafe, (with a beautiful garden out at the back where you can sit and eat in the summer) and every kind of delicious food, lots of it home made. I go there very often with my friend Helen Craig, the illustrator, and we try to turn our eyes away from the cakes. Sometimes we succeed. 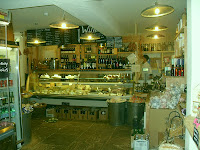 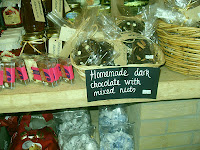 I was on my way (accompanied by Helen) to the church of St Mary the Virgin, which has served the people of this village since the days when it was known as Shelford Magna. There has been a place of worship here on this site since Saxon times but the present church was built by Thomas Patesely between 1396 and 1418. The village celebrated a 600th birthday in 1996, so I'm calling it 616 years old. It's a very traditional church, but the tower you see in the photo is one that replaced a tall spire which crumbled and gradually fell during the 18th century: a time when the whole church seems to have been dreadfully neglected. Fortunately, it's been brilliantly looked after since the 19th century and the new tower is a fine one. I love old churches. I love cathedrals. I love any place where you can feel the weight of centuries all around you. 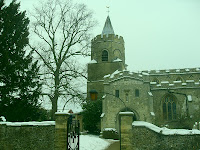 In St Mary's, the first thing to catch my eye, though, was a beautiful parish banner, made by Mrs Rosamund Angus as a memorial to her parents. Even though this is a very modern piece of sewing, it has a nice Byzantine feel to it, on account of the gold fabric, which is not too clearly visible in my photo. Take my word for it, it lights up this side of the church. 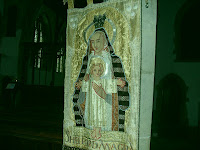 Look at this First World War memorial. I was struck, as I am always struck, by how many names there are just for this small corner of the country. The poppies look still fresh from November but the flags are older. 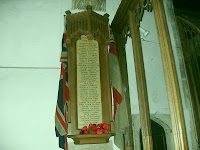 One of the main reasons I wanted to look inside the church was to see the Doom, a painting of the Last Judgement.The photos I took of it don't begin to show it properly, but it is very faded and hard to make out. The booklet I bought tells me that it's one of the finest examples of such a painting in the country, even though you can scarcely see it. It was covered up during the Reformation. I quote the description of it written by Richard Hale, vicar in 1961 which comes from the booklet: "In the middle, Christ wears the crown of thorns and the scarlet robe and he sits on a rainbow with the sun on one side and the moon (with a face) on the other. His left hand is raised in a gesture of judgement. Angels on both sides bear the cross, the spear, the sponge and the javelin. To the left is John the Baptist - the prophet of wrath to come. To the right kneels the Virgin Mary, interceding for sinners. Above angels sound the last trump and below the dead rise from their graves. To the right, the redeemed enter through the gate of the heavenly city, welcomed by the blessed ones on the wall. To the left, the demons drag the doomed off to hell." You would be well advised to conjure up in your minds what Rev Hale has said and not look too closely at my inadequate photograph. 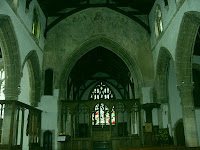 I couldn't make out much of the detail of the painting, but this angel on a pillar can stand in for all the others Richard Hale described. 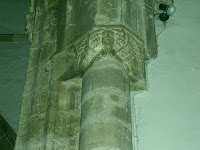 All over the church there is beautiful wood carving. This is from the choir stalls. 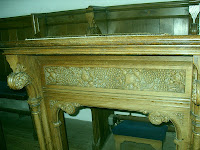 Above the font you can see John the Baptist and the Virgin Mary in stained glass. 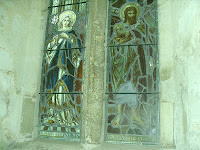 And on the way out, a beautiful Memento Mori, looking suitably sombre in the snow. But the impression that the church gives is far from gloomy. It's a place of calm, a very unflashy beauty and deep sense of the continuity of life in one place through hundreds of years that is deeply comforting, even to a Jewish atheist. 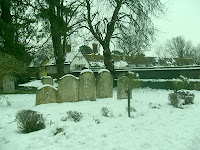 thank you for a lovely visit!

I must go there, if I am ever in the vicinity. I love old churches too - though I am an ex-Anglican Quaker - and if we're walking in the countryside, we always go on. And like you, I'm always struck by the amount of any small place's sons who were killed in World War 1. It's quite shattering to reflect upon. The feeling that was around when those memorials were put up, too, and I do hope they were some comfort to the bereaved families and sweethearts.

I agree churches are fascinating places to visit - I once did a sponsored cycle ride around all the Herefordshire churches, amazing how different they all are and how full of history.

Can't help thinking of J.L. Carr's 'A Month in the Country' and the film version of that when seeing murals in old churches.

My dad was the sort of Irish Catholic who would not venture into a protestant church and would murmur about all the pre-reformation ones having 'been nicked from us'. Maybe that is one reason that my own preference is for the very modern liturgical movement churches. But I think what really attracts me to those buildings of brick and concrete and wood is that they are such a hopeful expression of a very attractive forward looking theology. We have one here in the East End of London which has carved into its porch the words 'The Gate of Heaven' which is how everybody describes the bus stop outside it.

Oo, I must go and look ... and I just might wander into that coffee and cake place as I pass by....! Thanks, Adele.

You would love it, Pippa. And the Deli ought to be the venue for a nice lunch sometime....