Going to Heaven in a Handcart by Karen Maitland 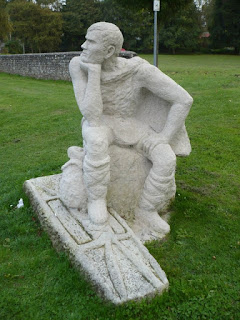 It’s been a particularly soggy winter in Britain, though not quite as bad as in the year the Black Death struck in 1348, when according to many independent records of the day, it rained every day from Midsummer’s Day to Christmas day. The saint we usually associate with rain is St Swithun, but today is the Saint’s Day of another rain-maker – St Cuthman.

Cuthman was 7th century Anglo-Saxon shepherd boy who became a mendicant hermit, travelling the roads to beg and preach. His mother was paralysed, so he put her in a wheelbarrow which he dragged or pushed along wherever he went, by means of a rope round his shoulders. It certainly can’t have been a comfortable ride for the poor woman, being trailed through the mud in rain, wind and snow or bumped over frozen ruts on rough tracks.

Inevitably, the wheelbarrow couldn’t take the jolting and fell apart at Penfold Fields in Steyning, Sussex and Cuthman’s long-suffering mother was pitched out, much to the amusement of the field-hands nearby who were hay-making. Legend has it that, in his rage at being mocked, young Cuthman cursed Penfold Fields saying that from then on whenever anyone tried to harvest hay there it would rain and destroy the crop. The curse seems to have drifted out far and wide, because eventually the superstition grew up that whoever cut grass on St Cuthman’s day would cause it to rain. An excellent excuse for not cutting the lawn today! 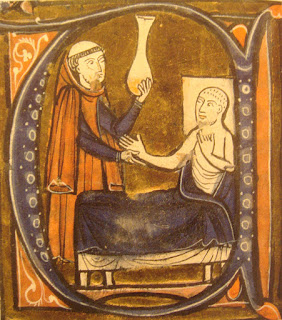 But the accident was a blessing for Cuthman’s poor mother, for the young saint took it as a sign he should build a wooden church at Steyning together with a hut for his mother, which must have been a great relief to her. In 1939, Christopher Fry wrote a play about St Cuthman, called The Boy with a Handcart.

Cuthman’s method of provision for his aged mother may have been unusual, but the problem of taking care of the elderly has been exercising all our minds recently as we all worry about our future pensions and who will pay for them. They had exactly the same concerns back in the Middle Ages. In medieval times pension provision took the form of a corrody, a single lump sum of money paid to a convent or religious house. In return the convent promised that when the corrodian became old and infirm they would provide lodgings, food and fuel for that person until their death. 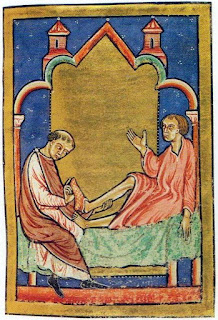 Sometimes the convent guaranteed to give the person a regular annual fixed income to buy these necessities, otherwise the convent would provide the lodgings, food and fuel itself.
Employers often bought corrodies for valued employees. The religious houses used the insurance scheme as a means of obtaining ready cash especially in times of financial hardship -and they gambled that the old person would die quickly, so they could make a profit. But if the corrodian lived longer than expected, the religious house would end up losing money and there were a number of complaints from almoners in the convents or monasteries at the time that the elderly were living too long and proving too expensive. It seems little has changed!
Sculpture of St Cuthman by Penelope Reeve, created 2000, on St Cuthman’s field. Photo attribution - Pam Fray [CC-BY-SA-2.0 (http://creativecommons.org/licenses/by-sa/2.0)], via Wikimedia Commons

This is fascinating - and I didn't know that Christopher Fry play - off to look for it now!

It's 'The Boy with the Cart' - the first Christopher Fry play I ever read - we had it at home in a limp green paper edition, and it has the most ravishing chorus about 'rain on dry ground'! Lovely post, Karen! I had never heard of corrodies!

Wonderful post, Karen...I think the Corrody idea is brilliant...wish there could be a modern equivalent. Had not heard the word before...you know SO MUCH!

I do like this blog. The complaints about the old living too long show nothing has changed that much, I fear! But also made me think about Mrs Dashwood the younger, in Sense and Sensibility, complaining about how inconsiderate it is in a couple of old retainers to stay alive and keep needing the annuity her father - I think - had left them. So is St Cuthman the patron saint of non lawn-cutters?

Lovely post - I've been encountering all sorts of unusual saints on this blog.

Have to say that cursing the Penfold Fields with perpetual rain at hay-making time wasn't a particularly saintly response :)

I've come across corrodians in Eliis Peters' "Cadfael" series, and they also feature in Candace Robb's mystery "The Riddle of St Leonard's", where the corrodians of St Leonard's are mysteriously dying. Murder, of course, is a rather drastic solution to the problem of overly long-lived pensioners!

The story of St. Cuthman goes on. He struggled to build his church. He was a good shepherd, but couldn't measure up. So he was relieved when a jobbing carpenter came along and took over the job. He disapproved, however, of the way the carpenter whistled and sang while he worked - Cuthman thought he shouldn't sign while about God's work. He didn't like the workman gossiping and laughing with passers by, or having a drink. He had to keep reminding him to think of God.

When the work was finished, Cuthman asked if there was anything he could do to repay the workman. Could he pray for him, absolve him of any sins? Shouldering his tools, the carpenter said, "No, Cuthman - just try to keep my rules." And vanished.

Cool story about Christ the Carpenter and St Cuthman.
A nice reminder that joy in life should be celebrated as God's gift, not suppressed.

I see that today's saint of the day is St Scholastica, who is conveniently invoked against against rain and storms!

I know Steyning very well Karen, (it crops up in my novel the Book of Fires) but never knew about St Cuthman and his rainy-day curses... he must have felt very bad about the cursing to have taken the trouble to build a whole church afterwards. (Local churchgoers must have had mixed feelings about the episode, one suspects?)