Crowns come in all shapes and sizes. Kings wear them. Queens wear them. Little girls like to wear them when they dress up... and so do big girls! Since a crown appears as a magical object of power in the third book of my Pendragon Legacy series "Crown of Dreams" I had the perfect excuse to buy this shiny jewelled version to wear at events. ( Note to potential muggers: it’s plastic and came from the local pound shop, so those emeralds and rubies are NOT REAL… authors cannot afford to buy real crowns, ok?) 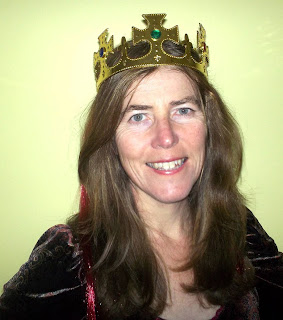 The packet claims this to be a “Tales of Olde England" crown, which seems perfect for my books… but is it genuine? What kind of crown would the real historical King Arthur have worn?

To find out, let's go back a few thousand years...


No crowns from the pre-Christian era have survived, but we know what some of them looked like from studying other historical records. Perhaps the best known ancient crowns are the White crown and Red Crown of Upper and Lower Egypt, recorded in hieroglyphs. These were combined into the distinctive Double Crown worn by the Pharaohs of Egypt:


Then there was the radiant crown of the sun god Helios, otherwise known as the Colossus of Rhodes - one of the Seven Wonders of the Ancient World, which was destroyed by an earthquake in 226BC. Today, the same crown is worn by the Statue of Liberty in New York.

In classical times, crowns were usually a simple ribbon called a "diadem". The ancient Greeks wore a white ribbon to indicate kingship, while the Persian Emperors wore a more elaborate blue-and-white diadem.

Also in the ancient world, it was customary for winning athletes to be crowned with laurel leaves. In the early Christian era (around 300AD) Emperor Constantine adopted this idea, and so we see the laurel diadem worn by rulers of the Roman Empire with its (previously real) leaves beaten out of gold.


Moving on a few hundred years, the oldest surviving European crown is the Iron Crown of Lombardy. This was fashioned in the Early Middle Ages (i.e. around the time of King Arthur, maybe?), and consisted of a circlet of gold fitted around a central iron band, which according to legend was made out of one of the nails used to crucify Christ.


This looks a bit different from my plastic version, but is probably a more authentic Arthurian crown. (I’m pleased it has jewels, because they are important to my plot!) The iron band in the middle having a religious connection is fascinating, and something I missed for my book – although other magical objects in the Arthurian legends have a spiritual connection, the most obvious being the Holy Grail, which becomes the Grail of Stars in the final book of my series.


Crowns represent both worldly and spiritual power. According to the Bible, Jesus wore a crown of thorns at his crucifixion, and this has become a common symbol of martyrdom.


while in Roman Catholic shrines, Virgin Mary statues are ceremonially crowned in spring to commemorate her ascent to Heaven.

So perhaps it isn’t entirely unreasonable of me to crown King Arthur with a "Crown of Dreams" bestowed with magical properties? Being a legendary king, Arthur reigns in the enchanted mists between fantasy and history, with one eye on the Holy Grail and the other on the Dark Age barbarians rampaging across his lands. A crown that combines magic with kingship would seem to fit well on his head, even if he wasn’t strictly a king as we know it!


What do YOU think King Arthur’s crown would have looked like, assuming he wore one?

The third book in her Pendragon Legacy series about King Arthur’s daughter Crown of Dreams is published this month in hardcover by Templar.

Book 1 Sword of Light (nominated for the Carnegie medal) and Book 2 Lance of Truth are also available in hardback, paperback and ebook.
Thanks to Wikipedia for the pictures used to illustrate this post.
Posted by Katherine Roberts at 02:00

Golly - the Iron Crown of Lombardy is really something! I've never seen it before. But do you remember that MR James ghost story about an Anglo Saxon crown being found on the East Anglia coast - with a malevolent guardian? "A Warning To The Curious"? I wonder if your 'Crown of Dreams' is supernaturally guarded?

The most beautiful crown I know is that of Margaret of York, Duchess of Burgundy (late 15th Century). It is very similar to the one in your Howard Pyle illustration of Arthur.

Fascinating post!
I imagine King Arthur would have had two crowns... one more elaborate for ceremonials and one more simple diadem or circlet for every day... In any case those things can't have been very comfortable! :p

I haven't read the MR James, but a ghost story with an ancient crown sounds very appropriate! (And yes, there's lots of supernatural happenings around the Crown in my book...)

Must look up Margaret of York's crown. I like the idea of a monarch having several crowns - one beautiful but impractical, another comfortable "everyday" wear. Bit like pairs of shoes, I guess?

As for crowns, I favour the barbarically splendid, so I vote for the Crown of Lombardy. I've seen illustrations of Dark Age crowns that not only had great lumps of semi-precious stones, but chains of gold, gems and pearls dangling from them to below the wearer's shoulders. Chic!

Ah, chains of gold and pearls... knew I was missing something! I can manage purple hair extensions, will that do?

When Edward I (who was obssessed with the Arthurian legend) defeated the Welsh king Llywelyn, he nicked the Welsh regalia (as he did that of the Scots). One of the Welsh treasures was a coronet reputed to be an early medieval piece known as the Coron Arthur (Arthur's coronet). There's a bit of confusion about what it looked like as there seems to have been more than one coronet. However, in this Wikipedia article there are some images giving an idea of the appearance of Llywelyn's coronet. It does, as it happens, bear some resemblance to Margaret of Burgundy's crown, though a much lower version.

I personally feel that Arthur's crown would have resembled the Iron Crown - a substantial gold band studded with the sort of chunky, rather dull-looking jewels used in the days before the faceting of jewels became a common process.

Have been away, Kath and late to this lovely post! You look as though crown wearing comes naturally!

Thank you for the link, Annis. I missed that one, very interesting.

Thanks Adele! I find crowns can be quite useful for taming frizzy hair...