The Names of the Ladies of the Roses, by Louisa Young

'I should like to know the true identity of this Madame Lauriol du Barny who gave her
name to such a sumptuous flower. I assume she must have belonged to the haute cocotterie
of Paris. Or perhaps I am completely wrong and she was a perfectly respectable woman,
the wife of a rose-grower from Lyons ….'
Vita Sackville West

I've been wondering myself ever since I planted my own first rosebushes, years ago - Madame Gregoire Staechelin, Madame Albert Carriere, and Sarah van Fleet. Who were they? What did they do to deserve it? Why the men's names?

Who was Ghislaine de Feligonde? Who were Madame Isaac Péreire, Madame Plantier, Felicite Parmentier and Fanny Elssler and Zephirine Drouhin? Who were Bessie Johnson and Ena Harkness, Penelope and Albertine, La Belle Sultane, and Josephine? Was Dorothy Perkins named after Dorothy Perkins, or vice versa? Who were all those Duchesses, Montebello and Buccleugh and du Berry? And who inspired the Rosa Mundi?

So I found out. Well, I found out some. Let us start with Madame Isaac Péreire 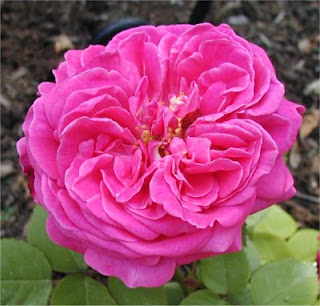 Madame Isaac is opulent of flower - very double - but scraggy, long limbed and prone to blackspot. Its colour has been described as 'rich pale crimson fading to lilac or silver at the edges'; bright fuchsia, raspberry, purplish rose madder, and 'strident pink … fights a losing battle against the inroads of magenta' (Jack Harkness). It is thorny with little buds, in clusters of up to five, and smells as fine as any rose you ever smelt. 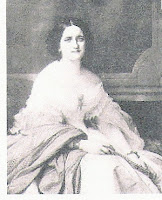 Her name was Mademoiselle Fanny Péreire, and she was born in 1824. How she managed to be Mademoiselle and then Madame of the same name came about like this. 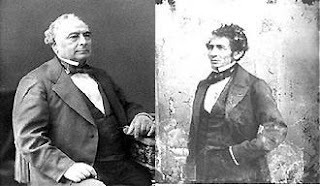 The Péreire brothers, Émile (1800–1875, left) and Isaac (1806-1880, right), were bankers from Bordeaux, of Sephardi Jewish Portuguese descent, though converted now and devoted followers of St Simonism. St Simon believed that the sole purpose of Royalty was to protect a nation's poor from its rich, so he was an admirable choice of saint for such phenomenally rich people.

Their grandfather was Jacob Rodrigues Pereira, one of the inventors of sign language for the deaf, who left Portugal and became an interpreter for Louis XV. The brothers made their fortune during the Second Empire by developing the railway in north-east France, by building, finance and tourism. In 1852 they founded Credit Mobilier, and they were closely involved with Haussman, in financing the reconstruction of Paris with its grands boulevards. It went bust, but they were protected by their empire of art and vineyards, hotels and tourism, baths, La Compagnie Generale Transatlantique; and their many overseas interests. Though their name is no longer very well-known, much that they founded still exists, and though Place Péreire in Paris has been officially debaptised, the metro station Pereire survives (Line 3, between Wagram and Louise Michel). In their heyday they were well-known as rivals - and neighbours - of the Rothschilds.

The brothers worked closely together, had neighbouring offices, and lived together in Paris. Closeness of family and, once they had made their fortune, closeness of its maintenance, was all to them. This was not unusual among Jewish families at the time: having been chased from pillar to post, they liked to keep things compact.  At 24  Émile married a cousin, Rachel Rodrigues. Isaac married first Laurence Fonseca, who died in 1837, leaving two children, Eugene and George. Then in 1840, aged 34, he remarried - to his brother  Émile's eldest daughter, his neice Fanny, then aged 16.

Isaac was, it is reported by his biographer, 'imposant mais non denue de charme . . . austere et sage' (imposing but not without charm . . . austere and wise). Fanny, apparently, was not unwilling. But the Code Napoleon forbade actually consanguineous marriages, so they had to apply to Napoleon III himself for special permission. They got it, only for  Émile, who had previously given his blessing, to have second thoughts. In the end his brother and his daughter re-persuaded him.

The marriage was a great success. Fanny bore Isaac three more children, Isaac and Émile continued to work together, and they all lived together in the truly splendid Hotel Péreire, at 35 rue de faubourg Saint-Honore - currently the British Embassy. They also built together and shared a couple of country retreats:  a huge seaside chalet at Arcachon, from 1862, and a massive chateau at Armainvilliers, with a wing for each family and a grand communal salon. In the hall of the chateau the Péreires installed, if you please, a ship and a locomotive, to remind them where their money came from. Their taste and their wealth also ran to works by Rembrandt, Murillo, Franz Hals, Rubens, Vermeer and Ingres. A contemporary cartoon shows people bowing and scraping before a man who  'est lie avec l'oncle de la soeur du filleul de M Pereyre' (is linked with the uncle of the sister of M. Pereyre's youngest - which I think works out as the other M Péreire). Queues for their entertainments in Paris would reach three deep as far as the Madeleine.

The Rothschilds were neighbours in Paris and in the country - though the Péreire country estate alone was 4,000 hectares, so they weren't exactly banging knees. In Paris on one occasion when the Rothschilds next door were holding a soiree, the Péreire children let loose rabbits into their garden. Hauled up, they explained that they were 'nuisibles' - a nuisance. History does not relate whether this was seen as a good reason for letting them out.

The Péreire wealth was not only for ostentation: they were a very charitable family, and held to the Simonistic beliefs. After her very sick daughter was saved by a doctor in Gretz Armainvilliers in 1878, Fanny donated a hospital to the neighbourhood. The chateau was demolished in 1950; the park which is there now is called Parc Péreire.

After the deaths of Émile and Isaac, Fanny looked after both families. In her picture she looks opulent and benevolent, and true wealthy wife and Second Empire Madame, with white shoulders at the fashionable slope of the time, lace, drapes, centre parting and a resigned expression.

In 1880, the year of Isaac's death, Jacques Julien Margottin, rose grower from Bourg-la-Reine, near Paris, spotted the rose in the nursery of a grower called Garçon. Garçon had already registered it as Bienheureux de la Salle, in honour of St Jean Baptiste de la Salle. Margottin acquired the patronnnage of Madame Isaac to pay for the rights, and distributed the rose under her name in 1881. He seemed to have forgotten to mention Garçon.

What a fabulous idea for a post! Do more and please tell about Mme Pierre Ogier, who lives in my garden with Rosa Mundi and others. I suppose La Reine Victoria is the obvious?

These are great rose stories - looking forward to more!

Hurray for this post! I do love the names of all these roses and have often wondered WHO the ladies were...can this please be a regular column, Louisa.? Hope so. I used the names in my novel Watching the Roses but never thought of the women behind the names in any serious way. Lovely!

Lovely post, which brings back memories! My first paid writing work was an article for The Lady magazine about roses named after women - they only used the first and last paragraphs and got one of their staff writers to flesh it out, but I kept the magazine...

Would be fun to name roses after less fragrant women - the old battleaxe for a particularly indestructible one for example. My mind is whirling with the possibilities for my garden of thorns...

Lovely post - though it is true that roses are Vicious and will scratch your eye out to pay you for taking care of them... I still adore them.

Thank you so much for you wonderful article. I write a news letter for for my Preservation Committee and this was very helpful. I will be sure to point my readers to your blog.
Sonia

Do you know more about Zepherine Drouhin? I would so like to learn more.