WHAT IS THIS? by Eleanor Updale

All the fuss about the discovery of Richard III's remains has set me off thinking about the treasures that lie beneath our feet.  To be a treasure, the find doesn't have to be grand.   I once stayed in a house where it was impossible to do even the smallest gardening task without finding parts of those white clay pipes people used to smoke.

Even though the discoveries became routine, I never ceased to be excited by them, imagining some old bloke puffing away in the past. 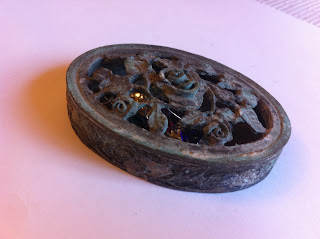 I'ts a  little container.  I've photographed it alongside a 3-pin plug, to give you an idea of its size. 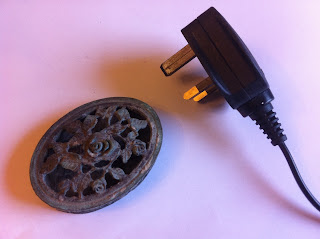 It's not very deep. 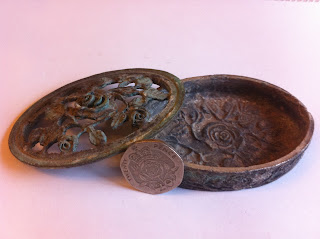 It's heavier than it looks (6oz/150gms) and not magnetic.  Its weight, and shiny bits on the bottom and the underside of the lid, suggest it might be made of lead, but the greenish patina makes me wonder whether it could be a lead-copper alloy. 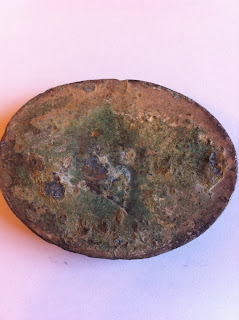 I have made no attempt to clean the box up, because I like its tarnished look - but even so, you can see that some of the decoration on it is quite fine.
Although heavily marked by age, the box seems to be very well-made.  The lid fits perfectly onto the base whichever wayy you turn it. The metal on the lid is cut out to make a pattern of leaves and roses, with a large central flower. 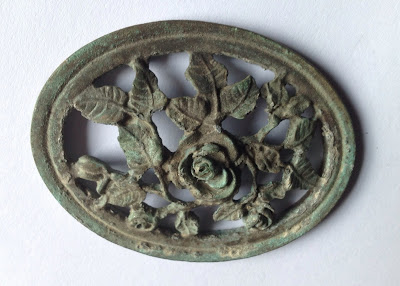 I wonder whether the openwork lid indicates that the box was intended to store something fragrant.

The floral design is repeated almost exactly on the inside of the base.  The differences in that image are sufficient to suggest that it was not  stamped or cut by the same machine, or cast in the same mould as the lid. Might the decoration be hand worked? 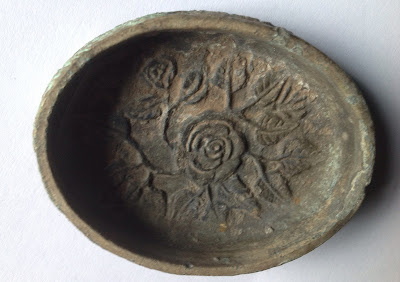 This interior detail would, of course, be seen only by the owner of the box, which implies that it might have been something special, intimate, and not just for show.

There are more roses and leaves around the edge of the base. 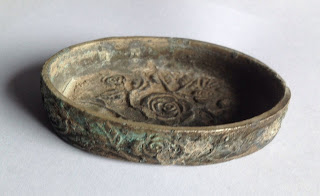 Have any of you seen something like this before?  Do you have any idea how old it might be?
I keep earrings in it.  What do you think the original owner used it for?
I love this little box.  But is it ancient, a little bit old, or is it something I could have bought in a poundshop last week? 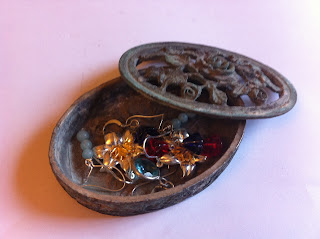 I bet one of you History Girls will know.


www.eleanorupdale.com
Posted by Eleanor at 01:30

What a lovely object! I think you're right and that this is for holding sweet-smelling spices - a sort of pomander. Given its weight and design, obviously not to be carried but perhaps put on a window sill in a lady's bedchamber where it would be warmed by the sun. I did wonder whether it might be a small incense burner but the design inside makes that unlikely. It's obviously meant to be seen; far too beautiful to be hidden in a cupboard, and the rose design would support the idea it was for something scented. I'd guess it's cast rather than worked. Definitely a copper alloy. It could have lead in it but bronze (copper & tin) is pretty weighty. I'd also guess 17th century.

I'm inclined to agree with Mark, some kind of pomander. You could perhaps put lavender inside and leave on a windowsill (meant to deter flies) or it could simply be a trinket dish for a lady.
Lovely find though.

Yes, a pomander does sound likely. What a delightful thing to find! We have got a clay pipe and an old ploughshare, plus innumerable bits of blue and white china, nothing as exciting as that (and since we sit on the site of an old agricultural labourer's cottage, unlikely to find anything so exquisite! Lucky you.

Wonderful! Love this post and your pomander/box/beautiful thing! Thanks for showing us! Good for those earrings, too.

I would have said a potpourri container, but I've spotted a few around online which look quite similar and are described as vintage trinket boxes, including these ones which came from an estate sale.

It seems that metal trinket boxes decorated in this style were fashionable around the first couple of decades of the 20th century, so vintage rather than antique. They came in many sizes but small caskets like yours were for little bits and pieces like rings and earrings. Maybe you intuitively knew what it was for :)

It might be fun to drop into one of those eclectic antiques/junk shops sometime to get an opinion and perhaps find the answer to the mystery!

Oh, I'd be so tempted to clean it!

It looks to me as if it could possibly be made of pewter, especially if it's quite heavy. Pewter became popular in the early 20th century after falling out of fashion in the 19th century. The design of your little casket also looks as if it might have been influenced by the art nouveau style.