Gossip from the table of Thomas à Becket - by Katherine Langrish 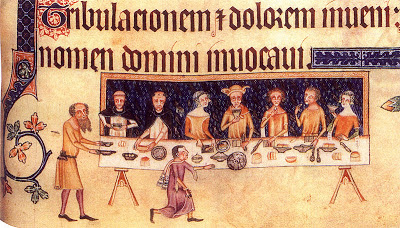 Witty, urbane Walter Map was a clerk, courtier and man of letters at the court of King Henry II.  He was eventually made arch-deacon of Oxford, and died some time between 1208 and 1210.  During his lifetime he wrote many books - he's even reported to have had some share of authorship in the Arthurian romances - but the only one which has survived is De Nugis Curialium (Of Courtly Trifles), a brilliant mixture of memoir, gossip, stories and opinions – and one of the liveliest accounts of that lively era.

Walter Map himself describes De Nugis Curialium – with mock-deprecation – as ‘A whole forest and timber yard, I will not say of stories, but of jottings… I am but your huntsman, I bring you the game, it is for you to make dainty dishes out of it.’

Map is our source for the story of Wild Edric, for the story of King Herla, and for other wild and magical tales from the Welsh borders (I used him extensively in research for my 12th century historical fantasy Dark Angels), but he is also a brilliant raconteur with a pen dipped in acid and a happy way of letting all his prejudices rip.  He satirises the court.  He dislikes the Knights Templar.  He disapproves of the Cistercians and pokes fun at the over-the-top names of their abbeys:

Thus they ... spread into many establishments; and the names of these always contain some spice of the divine, as Godscot, Godsdale, Port Salvation, Scale-heaven, Wondervale, Lantern, Brightvale (Clairvaux).  From this last rose Bernard [St Bernard, abbot of Clairvaux] and began to shine among, or rather above, the rest, like Lucifer among the stars of night. A man of ready eloquence he was, and used to have carts driven round through the towns and castles, in which to carry off his converts to the cloister.  …And as for the miracles which were done by his means, why, they were written by Geoffrey of Auxerre: believe ye him.

How he jabs in the knife! - comparing Bernard to the bright evening star but also of course to Satan, whose pride Bernard rivals - revelling in the absurd hubris of 'carts full of converts' - and then that sly, dry comment at the end.

Walter Map even treats us to his opinions on the practicality of underpants - sensible garments which all monks ought to wear, especially in strong winds.  He illustrates this with a story in which of course a 'white monk' - a Cistercian - is the comic victim:

The lord king, Henry the Second,  of late was riding as usual at the head of all the great concourse of his knights and clerks, and talking with Dom Remic, a distinguished monk and an honourable man.  There was a high wind, and lo! a white monk was making his way on foot along the street and looked round, and made haste to get out of the way.  He dashed his foot against a stone and was not being borne up by angels at the moment, and fell in front of the feet of the king's horse, and the wind blew his habit right over his neck, so that he was entirely exposed to the unwilling eyes of the lord king and Reric...

Our view of the Middle Ages is - inevitably - telescoped, simplified, partial.  We are unaware, or forgetful of, the politics and rivalries which divided what can seem, at this distance, a monolithic structure: the Mediaeval English Church. The lucky survival of Walter Map's 'Courtly Trifles' preserves at least some detail of the very modern bitchery that was in fact going on.  And here is Map, at the dinner table of  Archbishop Thomas à Becket, letting us in on a conversation in which some famous names are being dropped.

I was once present at the table of the Blessed Thomas, then archbishop of Canterbury; next to him were sitting two white abbots who were telling of many wonders done by that man, I mean Bernard  – the occasion being that a letter of Bernard’s was being read about the condemnation of Master Peter Abelard, the Prince of the Nominalists, who went further astray in dialectic, by the way, than he did in theology.  The latter was the study of his heart; in the other he laboured against the grain…

Well, a letter was being read of Dom Bernard, Abbot of Clairvaux, to Pope Eugenius, who had been a monk of his – and no second monk of that Order has followed him in that see. In that letter it was said that Master Peter was as proud as Goliath, and Arnold of Brescia [a disciple of Abelard and preacher of apostolic poverty, executed 1155] was his standard bearer, with much more to the same vicious effect.  The two abbots seized the occasion to praise Bernard, and extolled him to the stars.

So John Planeta [one of Thomas à Becket's clerks], hearing what vexed and pained him, remarked, “I saw a miracle at Montpellier which made many men marvel.”

He was asked to relate it, and said he:  “That great man whom you so justly extol had a demoniac, bound, brought to him at Montpellier to be healed, and seated as he was on a great she-ass, he commanded the unclean spirit – the assembled crowd keeping silence – and finally said, “Loose the man and let him go.” But the madman, on feeling himself freed, began to throw stones at the abbot as hard as he could, chased him through the streets, and even when the people caught him, still kept his eyes on Bernard, though his hands were held.”

The archbishop was not pleased with the tale, and said threateningly to John, “These are your miracles, are they?”

“Well,” said John, “those who were present said it was a very memorable miracle, because the madman was kind and generous to every one, and only vicious to humbugs, and it still seems to me that it was a judgement on presumptuousness.”

Is it just me, or can you too still hear the table erupt in unkind laughter? 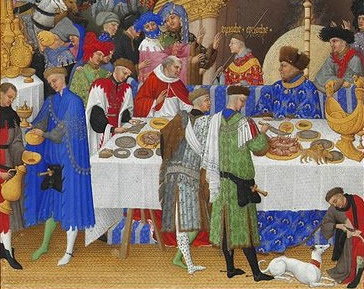 (The quotations in this post are from the translation by M.R.James, published by the Cymmrodorion Record Series, 1923)

Kath, I think I want your personal library. Just where do you find all these bright gems?

Witty and urbane indeed - you can just hear his voice - thanks for posting this!

(I'm not getting the second picture, just a small white rectangle, but that may just be my computer.)

Fixed! Those little brown animals on the table - could they be some sort of ferret?

Some are lucky finds, Penny - there's a huge, old-fashioned second-hand bookshop near here! But Map, I got from abebooks.com - I'd wanted to read him for ages, and when I needed him for Dark Angels, I had the perfect excuse to go ahead and buy him...

Glad you can see the picture now, Joan. I suspect the animals are toy dogs (I mean miniature dogs). Ferrets would be a bit smelly. But I don't know for sure! Their tininess might have been exaggerated by the artist. Of course the illustrations of the Tres Riches Heures are 200 years later than Thomas a Becket, but the picture does indicate the sophistication and state the 12th century Archbishop would certainly also have kept.

Wonderful post! I just love hearing those voices & the witty weapons of attack. Many thanks.

What a delightful post! Thanks for sharing. A marvellous find indeed.

What a marvellous book! Map's personailty comes across so strongly... and I love the illustration - those gorgeous bright colours!

Funny - and how very modern! Or is it simply that, as you say, our natures don't change much, however much we change the world.

I love this! It just brings the Middle Ages right to life. Thank you, and the end made me laugh out loud.