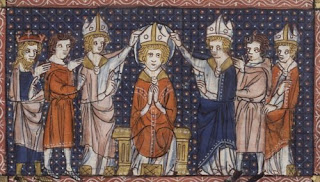 They are everywhere around us, the hidden saints, if you know where to look. This one is Saint Hilary of Poitiers and I was alerted to him by an article in the Oxford Times. If you have any knowledge of Oxford University, you might be aware that the three academic terms of the year are called Michaelmas, Hilary and Trinity (as opposed to Cambridge, where they are Michaelmas, Lent and Easter).

St Hilary was the Bishop of Poitiers in about 350 AD - the picture shows his ordination - and he was a great opposer of the doctrine of Arianism (the belief that God had only one form). So, pro-Trinity then, but that's not why he gives his name to the term we are currently in at Oxford and some Inns of Court. His feast day is 13th or 14th January and he's the biggest saint around to grace that month in which Hilary Term begins.

There are not many male Hilaries these days; I can think only of Hilary Benn. As I've written about before, once a name becomes unisex - Evelyn, Vivian, Shirley - it is soon dropped like a hot coal  by the boys. Only Julian has gone the other way - perhaps because Gillian became a separate female form.

Michaelmas of course refers to Saint Michael, the Archangel, whose feast day falls on 29th September.

This is Jacob Epstein's version of St Michael slaying the dragon on the front of Coventry Cathedral, though the "dragon" is here a very human-shaped Devil. Michael is the one with the flaming sword who prevents Adam and Eve from returning to the Garden of Eden. He also has two island mountains on either side of the Channel - St Michael's Mount and Mont Saint-Michel, as well as giving his name to my favourite sculptor Signor Buonarotti.

Less gloriously, Marks and Spencer's underwear bore the name St Michael until 2000, when it was dropped. A very hidden saint indeed.

But what about the less well-known ones? My all-time favourite is Sexburga, though it would be cruel to name a girl child after her now. Sexburga died in 699 AD, was married to King Econbert of Kent and had four children, two of whom are also saints, though fairly hidden ones. So she is much more respectable than she sounds.

She founded an abbey, as did her sister Saint Etheldreda - what a pious family! But in my imagination I want to put her together with Saint Frigidian, who sounds as if he needs to learn how to have a good time. In fact this Ulster saint transferred to Italy, where he is known as San Frediano and has this lovely church dedicated to him in Lucca: 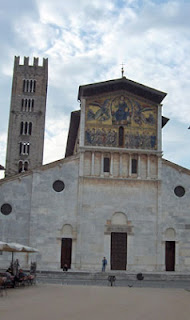 Then there are the saints who are well-known on the continent and hardly mentioned in the UK - Rocco or Roche (born in Montpelier and, incidentally the Patron Saint of Plaques - who knew?), Gimignano (born in Modena, but virtually nothing known of his life), Denis (though he must have been better-known here at one time, going by all the Den(n)ises of an earlier generation.


The name derives from Dionysius and Saint Denis was martyred by being beheaded. He did not let a little thing like that stop him from delivering his current sermon, picking up his head and continuing to speak.


Why did Kevin catch on as a boy's name and not Ninian or Nectan? And how many of us know that Saint Kevin was reported to be such an ascetic that he drowned a woman who tried to seduce him?

Santa Fina has a chapel dedicated to her in San Gimignano but her name hasn't made much impression on the baby names lists. She was only fifteen when she died, having suffered a debilitating illness (possibly osteomyelitis) and her flesh having grown into the wooden pallet on which she lay. Nevertheless white violets grew from the wooden board after her death, which is a nicer version than that her flesh was eaten by maggots and rats while she lived.

Who is your favourite little-known saint?

St Guthlac of Crowland, after whom my old school was named, and St Fursey of East Anglia, commemmorated every Sunday in the Orthodox church in Cambridge. Lovely post!

I love hidden saints - thanks for introducing me to more, and the link to that site!

My favourite is St Neot. He was 4 foot tall, thought to be a friend of Alfred the Great, and he was the patron saint of fish.

I had heard of St Rocco as the patron saint of dogs so your post sent me googling. Seems he's patron saint of several things, dogs and bachelors included! Didn't know saints got multiple things to look after...lovely post.
The village I grew up in has a local saint, Saint Mochua (Mochua is a pet name for Crónán). He was said to have three animal companions - a fly, a mouse and a rooster. Mochua was inclined to fall asleep at his studies and the fly would mark the sentence he fell asleep on, the mouse would nibble his ear to wake him and the rooster would crow if that didn't work.

Saint Kevin sounds a nasty piece of work - hadn't he heard of just saying no?

Sankt Florian is the patron saint of firemen or at least protection from fires in Austria and South Germany - important with all those picturesque wooden houses - and there are rhymes on some houses saying 'Heiliger Sankt Florian/ Schuetz mein Haus vor Feuer und Harm.' (Holy Saint Florian/ protect my house from fire and harm.) Another, more reprehensible version is 'Heiliger Sankt Florian/ Schuetz mein Haus, steck' andre an.' (Holy Saint Florian/ Protect my house, make others burn.) But I've never seen that one actually painted on the front of a house.

Wonderful post. I tried invoking Saint Gertrude to deal with my rats in Venice, but she wasn't much help. My research into the Holy Annorexic saints of the 13th - 16th century revealed some extremely strange ladies. In terms of names, my favourite was Joan the Meatless. She was not a vegetarian, but in fact eschewed all food for fifteen years apart from the Sacrament on Sundays.

St Seraphim of Russia was known as "The Flame in the Snow", which I think is absolutely beautiful.

Can't offer a little-known saint, but regarding unisex names, Christian is one that has become almost exclusively male - probably because of the alternative Christine. And Anglo-Saxon names: in the same era (she says vaguely) as Sexburga there was an abbess named Bugga.

Love this post! I don't have a hidden saint but loved all the saints I learned about in MILLIONS by Frank Cottrell Boyce! St Anthony who looks for lost things is a good one. Lost things often come back to you if you just wait long enough! I found a ring I'd lost outside in our garden about a decade after itwent missing. It was in the hedge. Don't ask me why but I was really pleased to find it again.

San Gennaro of Naples, an almost-certainly-fictitious Roman who is now the patron saint of blood donors and of not-getting-killed-by-Vesuvius. I've seen his bi-annual miracle when the ampules of "blood" liquefy in an atmosphere rather like a football final. Old ladies with the hereditary office of "nipotine" (either granddaughters or nieces) of the saint yell abuse at him until it happens.
It is believed that a rapid miracle is good luck. In the year of the earthquake, I was told, the miracle failed. When Napoleon took the city, the miracle did not happen until the commander had a word with the cardinal... suddenly the blood liquefied. But the Neapolitans took this as the saint siding with the French, so they sacked the cathedral and dragged the saint's statue out and threw it in the harbour, and promoted Santa Lucia instead. But when Vesuvius started to rumble and steam they reinstated the saint.
In the 1970s the calendar of saints was reformed with some of the more obviously mythical ones knocked off (Saint George and his dragon went that way). Gennaro was under threat but again the Neapolitans rioted. A statue of Gennaro on the Riveria di Chiaia had the slogan "non si prioccupi Gennar' = don't worry Gezzer.