Greetings, oh readers of history.  I am immersed in the fifteenth century just now, researching the historical thread of the Joan of Arc book (I am certain, by now, that I know who she was and it certainly wasn’t a peasant girl who happened to be able to ride a warhorse in full armour).
In the process of this, I am remembering my childhood, brought up in a small village in the Scottish lowlands.
The origins of the village go back far further than my current time period. It seems likely there had been a place of worship at the foot of Balageach, the local hill, since the fifth or sixth century AD  and I am inclined to think it goes back a lot further than that.
The name itself has nothing to do with winged birds of prey, but comes from the Old English given name of Ecgwulf ,or Ecgel, meaning ‘Sword Wolf’ coupled with the better known ‘ham’ for a village or steading.  The village of Egglisham is recorded as having been part of a bequest made by Fitz-Alan, the first high steward of Scotland, and founder of the Stuart dynasty, to Roger de Montgomerie, fifth descendent of the Roger de Montgomerie who fought at the side of the Bastard of Normandy at the battle of Hastings (you can tell which side I would have preferred to have won: history often hangs on a single battle and Hastings is one of those – our entire feudal system arises from that one afternoon’s mistaken strategy).
The Earls of Eglington owned the village by the fourteenth century and it was one of those whose words were recorded in the family bible, a copy of which my brother and I studied when I was young.  It wasn’t the bible that was interesting, but the marginal notes. The tradition of medieval times was that these were made in the margins to create a running diary for posterity.
I remember little of what was said, except for one notation to the effect that the Earl of the time had been jousting ‘at the tilt’ and there was so much blood in his great helm, that he had to soak his entire head in hot water before he could take it off.
One assumes he succeeded in doing this without drowning himself, and lived to fight on, but it’s the kind of personal detail that is missing from the history books and that is feeding now into my sense of awe and wonder and the men who took to jousting as a profession and spent their lives and their finance pursuing it.
The closest I’ve come to the head-boiling incident in the written histories is the story of William Marshal, who rose from being a fairly lowly knight to end up as a regent of the young king Henry III on the basis of his prowess at the joust.
There is an oft-repeated story to the effect that William went missing one day after yet another winning bout and was found in the blacksmith’s with his head on an anvil having his great helm beaten back into a shape that would allow him to take it off.
I’ve only worn a great-helm once and that was quite claustrophobic enough. I wouldn’t want to fight in one and I certainly wouldn’t if I thought there was a danger of its being crimped onto my head forever.
Still, back to Eaglesham. It progressed quietly enough, knights not withstanding, until the Covenanter wars of the Seventeenth century when  Charles I tried to impose a new prayer book and regulations on the Presbyterians of Scotland and they rebelled in the form of the Solemn League of the Covenant.
Alexander, 6th Earl of Eglinton, signed the Covenant and was clearly an active  supporter and the churchyard hosts a memorial to two Covenanters who were shot on their return from a ‘convenantical’ in May 1685.  The hill at the top of the village was known as ‘Covenanter’s Hill’ well into my teens: oral history often survives when the politics of a place has long since moved on.
In the 18th century, Alexander, the 10th earl of Eglinton, rebuilt a ‘planned village’ (much like our new towns, only pleasanter), shaped around the letter ‘A’, which was itself placed over the old Motte built in 1388 with money paid for by ransoming Henry, Lord Percy, who had been captured at the battle of Otterburn. 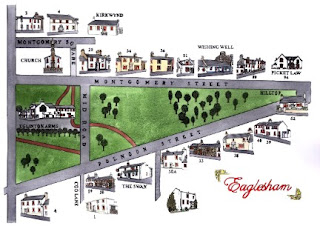 The central green was the A itself, with woods in the northern triangle and a pub at the base, between the long arms of the A.  Cottages line the outside edges of the two long arms, with the track along the middle being left as a muddy lane that was gradually paved over.  Coo Lane (coo = cow) led out west to the dairying fields and the village church, built in 1790, sat on the lower end of the eastern half.
Our latest claim to fame in the 20th Century is that Rudolph Hess bailed out of his stricken Messerschmitt to land in fields just outside the village on the night of 10th May 1941.
Since then, we have languished in quiet obscurity, too close to Glasgow for comfort, not quite close enough to have super-fast broadband.  But it’s still a magical place and you can taste the history in the air on a summer’s day…
Posted by Unknown at 09:13

There was a lot more to William Marshal than jousting, which was only a minor, if vivid part of his career. If he rose to become regent of England it was down to a wide range of abilities beyond the physical. He entered royal service after saving Eleanor of Aqutaine from ambush. He went on to tutor her eldest son in the knightly arts, and went jousting with him, it's true. But he also organised the young man's military household and served Henry II, Richard I and John both as a military advisor and in a wider diplomatic capacity. By the time he became regent to Henry III he had a long career behind him of being a commander in the field, an entrepeneur (founder of New Ross in order to bring revenue to his lands in Leinster), diplomat and statesman (Magna Carta). Being a top of the range jouster was a colourful part of his career, but it wasn't the reason he got picked for promotion, in fact the opposite. It was almost his downfall when Henry the Young King became jealous of all the accolades being foisted on William and banished him from court.
I used to live at Newton Mearns on Eaglesham Road and knew Eaglesham as a child. (My father was a textile chemist at the long defunct Wallace & Comapny).I knew the Rudolf Hess story but hadn't heard the others, so many thanks. I had no idea that Eaglesham was so full of history!

Thank you - clearly that corner of Renfrewshire (as was) is a fertile area for nurturing future authors... Presumably someone, somewhere - perhaps several someones - has written a fictional biography of Marshall - he sounds a completely fascinating person...