Emma and Nelson and the Birth of Modern Celebrity - Lucy Inglis 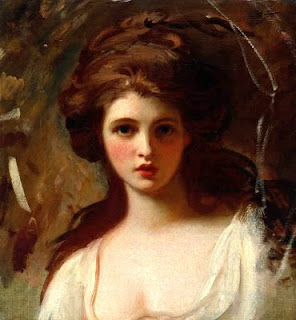 What is a celebrity? The term comes from Middle English and Old French and literally means ‘celebrated’ or ‘famous’. Both the reality and the concept of fame have been at the centre of British consciousness for over a thousand years. Beowulf was the original celebrity of Anglo-Saxon literature: cool and unspeakably heroic. Other, anonymous Anglo-Saxon warriors such as The Wanderer, and The Seafarer, create poetry from the anguish of exile from their fellow man. For them, to be isolated from the warmth of the mead-hall chills their bones. At the centre of this hall, in all Anglo-Saxon epic poetry, is the king, prince or chief who lights the fire of camaraderie that literally warms all those within.

This mindset continued into the medieval period, where the peculiar combination of Norman aristocracy dominating an Anglo-Saxon society retained the ‘celebrity’ effect, culminating in the first real ‘modern’ celebrity: Elizabeth Tudor. Elizabeth made conscious decisions, as with other solitary queens before her, to aspire to, and create the illusion of a female warrior-prince. It was a construct, along with The Virgin Queen, that would win the heart of the English people. Elizabeth represents the first true division of the ‘celebrity’ personality from the person behind the image.

Celebrity took a back seat for the early part of the eighteenth century. Neither Charles I nor James were able to impact on Elizabeth’s glittering and almost super-human legacy but Charles II was a man raised to be king, with all the education, style and personal qualities to be a success in the role. Upon his return to the English throne, his decision to rule kindly and well transmitted itself to his Royal persona, which was irreverent and fun. No sooner was Charles back on the throne than theatres sprang up throughout London, with endless new and often very short-lived works being performed. It is a mark of the social mobility of the post-Interregnum period that both Charles would choose mistresses from the theatre, most notably orange seller and actress Nell Gwynne; the duality of famous people being at once apart, and at once, ‘just like us’, was seen in both Charles and Nell. Foreign visitors and Londoners alike noted on how Charles walked in the parks and was a familiar sight around Town. He might often be found standing on the path behind the Pall Mall house he had granted to Nell Gwynne, whilst she leant over her garden wall to speak to him. Nell’s rise to both fame and popularity was meteoric in the way we have become accustomed to now with television programs such as The X-Factor, or reality series.

As the eighteenth century accelerated, so did the nature of London life and more celebrities, and celebrity types emerged to fill the city’s lively social scene. News took on a sense of immediacy, thanks to cheaper printing techniques and changes to licensing laws. In Soho, the artisan quarter of London, a lively and often heated debate on art and its meaning was played out by a set of characters who would go on to become some of the greatest celebrities of the eighteenth century. In 1753, William Hogarth published The Analysis of Beauty. Its publication also kicked off a massive and very public squabble in the art world that was played out in coffee-houses and societies around the Town. But Hogarth had a point and he also created enduring beauty. The cult of the beautiful had been growing since Burlington and his peers began to import ancient Greek and Roman standards of perfection into London. Insidiously, but then very rapidly towards the middle of the century, it was not enough to be witty and charming and to conform to a set of regular features reflecting the standards of the day - it was necessary to be beautiful. And Hogarth, with his portrait The Shrimp Girl, shows clearly that beauty can be found anywhere.

Hogarth’s contemporary Joshua Reynolds knew his worth as a portrait painter, and flatters his subjects whilst still managing to bridge the gap between viewer and sitter, the celebrity and the admirer. This ability made him popular with London’s famous names, both in the theatre sets, but also in the aristocracy, where the men suddenly looked more louche, and the woman’s necklines fell along with their posture into something slightly racier. Reynolds introduced a note of intimacy with his subjects which became desirable, and the ideal: at once both intimate, yet completely out of reach. One of his finest portraits of a theatre beauty is that of Francis Abington. She was a true celebrity, a star both on the stage and off it, and crowds followed her when she went shopping to see what colour ribbons she would buy, or which fan-maker she went to. On the stage, she was celebrated, and her benefit nights were always sold out. Reynolds paid for forty seats at her benefit in 1775 (benefits were the night when the actress herself received the takings from the door, so all her friends and admirers would be sure to turn up that day in order to line her pockets). Samuel Johnson went along and could see or hear nothing for the crush and the din. When James Boswell, his great friend and biographer asked him why then, had he gone? Johnson replied:

‘Because Sir, she is a favourite of the publick; and when the publick cares the thousandth part for you that it does for her, I will go to your benefit too.’

One of Reynolds’s most famous, and probably most beautiful subjects was Emma Hamilton. Hamilton is perhaps the greatest female celebrity of the Regency period. Her lover Charles Greville would instigate one of the greatest celebrations of beauty the eighteenth century was to see, when he commissioned George Romney to paint his mistress. Romney’s work was popular already, and his renderings of Emma’s beauty rapidly elevated her in society in the way Mario Testino’s photographs of Kate Moss cemented her celebrity status. Emma would go on to marry Greville’s uncle, Sir William Hamilton and take up residence in Naples. In a bizarrely Jordanesque/Katie Price moment, she used her birth name of Amy Lyons when she married. The Hamiltons carried on happily until autumn 1798, when Nelson arrived. They were possibly the two most famous people on the planet, and when they met, Emma fainted. Nelson wrote home to his wife of having met Emma, and soon, he and Lady Hamilton were involved in a passionate, if unlikely love affair. Sir William tolerated the affair - the three even lived together. He was ageing by then, idolized Nelson, and loved his wife. All three returned to London. It was an adequate, if not altogether satisfactory situation, especially when Emma gave birth to Nelson’s daughter Horatia in Sir William’s home in Clarges Street. The scurrilous press commentated on their every move from home, and even went through their rubbish so they could see what they ate. Emma became even more overweight and Nelson, shy and awkward, unable to contemplate the social life she craved. Their bizarre life was the stuff dreams are made of for the tabloids.

With Emma Hamilton and Nelson, the worship of both the famous, and fame itself became a reality in Georgian London. Their lives held heroism, beauty, love, and scandal. The celebrity bar that had been set high at the beginning of the century, was now raised even higher. A cheap gutter-press filled with daily news-sheets was a hungry maw waiting for any triumph, but also any slip. The appetite for celebrity would continue to grow, creating mega-stars out of military heroes, actresses and the mistresses of great men but the illusion was to grow ever greater. From the talented stars of Victorian popular opera, to the beautiful muse-mistresses of the pre-Raphaelites, to the elegant stars of silent film, the beautiful comediennes of the 1940s, the essence of star quality remained essentially unchanged. It was war which increased the British appetite for frivolity and by the 1960s, it was enough simply to be handsome or beautiful. The veneer became the reality.

It is a curious semantic shift that the word célébrité, in use for centuries and meaning ‘the state of being celebrated’ for a personal quality or singular achievement, has become celebrity, a state of being.

Great post, Lucy! I love your comment that George Romney was to Emma Hamilton what Testino was to Kate Moss.

Your article made me investigate further and I found Romney did paintings of Emma in Classical "Attitudes" based on her dressing up to perform titillating charades for the upper classes on the Bay of Naples. That fabulous portrait at the top of your post is apparently Emma as "Circe" the temptress who kept Odysseus from wife and responsibilities.

It's astonishing how many book covers that Emma-as-Circe painting turns up on :)

It's hard not to think of the role of the tabloids in relation to the creation of celebrities. One of the earliest national news celebs was Victorian soldier/adventurer Frederick Gustavus Burnaby. His travelogue "A RIde to Khiva" is still an excellent read. There's a theory that the pressure of fame actually drove him to an early death- he knew he could never keep up the dazzling exploits expected of him and decided to go out in a blaze of Boys' Own glory.

How fascinating! I was looking at Emma in the National Portrait Gallery only the other day, but I know a lot more about her now.