FAKING IT by Eleanor Updale

Thirty years ago yesterday, the Sunday Times published what it thought was a magnificent scoop: they had bought from the German magazine Stern the rights to serialise Hitler's newly-discovered diaries.
Thirty years ago today, they began climbing down. In no time, after some straightforward checks, the diaries were exposed as fakes, and a once-great newspaper was made to look very stupid.


Those of us who were around at the time will remember excitement that greeted their publication, and the unrestrained joy of the rest of the British press when the 62 handwritten volumes were revealed to be forgeries: written in modern ink on paper that would not have been available in Hitler's lifetime, and sometimes using figures of speech that simply weren’t current in Hitler’s day.

Though the Sunday Times will be forever tainted by its mistake, the main casualty affair was the historian Hugh Trevor-Roper (by then Lord Dacre), who had been sent by the Sunday Times to authenticate the diaries.  Trevor-Roper, son-in-law of Field-Marshal Earl Haig, was the former Regius Professor of Modern History at Oxford and, at the time of the diary debacle, Master of Peterhouse, Cambridge. 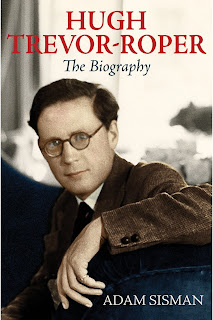 Trevor-Roper already had enemies in the historical establishment.  He was one of the last mainstream historians to dabble in several periods at once, with books and articles on subjects including World War II, the Tudor Church, and the economics of the Civil War. He was famously slow with his books. Even Mrs Thatcher chided him:.‘On the stocks? On the stocks?  A fat lot of good that is! In the shops, that is where we need it!’
In many ways Trevor-Roper embodied the crazy Oxford ‘Modern History’ syllabus of the day (55BC to 1911, with everything from 1688 onwards covered in eight weeks). In the 1970s you would sometimes see him walking round the town, looking very aristocratic and proud – though he was in fact of relatively lowly stock: the son of a provincial doctor. But he was one of the few Oxford professors of whom the outside word had heard. Then, as now, academics who were not invited to write newspaper articles or appear on radio and TV resented any colleague’s public exposure.  Even (perhaps especially) fellow media tarts, such as AJP Taylor were embroiled in spats with him.  It was a pretty nasty period for infighting at universities - giving rise a new collective noun: a malice of historians.
Plenty of academics enjoyed seeing Trevor-Roper brought low.  But he was not the only one taken in by what appeared to be an irresistible story.  I have posted some links at the bottom of this page to first-hand accounts of how it all went wrong.
It retrospect it seems extraordinary that so many people fell for the hoax, but in fact the episode is a very good example of the power of group-think, and of how difficult it is to ask obvious questions or to challenge accepted 'truths' when those around us accept them. In the case of the Hitler diaries, an overbearing proprietor - Rupert Murdoch - was so determined to publish that his underlings willingly suspended their normal journalistic and historical instincts. Trevor-Roper was a board member of Times Newspapers, and although theoretically he was there to keep an eye on the owner, he was swept up by the 'bravado' Murdoch admitted to the Leveson inquiry last year.

But it would be wrong to imagine that the Hitler Diaries affair, though a landmark error in handling evidence, was a one-off.  We need only look at the very recent reports on the banking crisis, NHS scandals, and the cock-ups at the BBC to see that such frailty is still with us today.
Elizabeth Chadwick’s excellent post last month on this very site, in which she cleverly blasted away accepted 'truths' about the family of Eleanor of Acquitaine, shows how malice, cowardice and ambition are not indespensible ingredients of mistakes. There’s something much more potent, and perhaps more common, lurking in the background.  It’s the failure to ask primary questions when faced with a humdrum ‘fact’ – something ‘everybody knows’, which one generation of historians has passed on to another.  In the case of Queen Eleanor’s brother, there is no cause to believe that anyone deliberately set out to mislead. It’s just that no one, other than Elizabeth Chadwick, asked themselves, “Really?  How do we know that?”
We are at a funny time in historical research.  Students are (rightly) warned at the beginning of all good history courses about the dangers of believing everything you read on the Internet.  Untruths and half-truths can get bedded in to the accepted narrative faster than ever, as mistakes, and speculation disguised as fact, are cut and pasted from one article to another.  But in another way, the Internet may be our saviour: electronic images of original documents have never been easier to access; plagiarism can be detected with simple software programs; references can be more easily checked.
And that last point is crucial.  Sometimes you hear historians harking back to the pre-Google age, when anyone writing a learned work needed genuinely to read any source from which he quoted, to get the reference right.  What the Internet is revealing is just how often past scholars simply copied those references from each other's work, adopting the interpretation of their predecessors about what the original said and meant without consulting it at all.  Putting right some of the accepted ‘truths’ of the Trevor-Roper era has become fertile ground for PhD students everywhere.

And yet, and yet...Many things still go unquestioned, and not just in the world of words on paper.  I had a very interesting conversation with a painter the other day about the stunningly modern techniques used by El Greco in the 16th century.  He said it was almost as if...
Of course we all accept that the El Grecos in our galleries are genuine… don't we?  The experts must have checked them....surely?   But don't forget that it was only a confession that exposed Han van Meegeren, the Dutch forger who sold fake ‘Vermeers’ to the Nazis.
And what's wrong with a good old-fashioned hoax, anyway?  With digital technology it is growing ever easier to produce copies indistinguishable from the real thing.  Maybe we should celebrate the forgers of the past, who needed fabulous skills to pull off their deceptions .


The key forger of the Hitler Diaries, Konrad Kujau, served a prison term. When he came out, he made a successful career capitalising on his notoriety by openly selling forgeries to an eager public.
Shortly after the Hitler Diaries debacle, Britain’s most celebrated art forger, Tom Keating, died.  He'd become a bit of a media poppet in the 1970s, when he took the art establishment for a long and lucrative ride.
Maybe we all love to see the experts overturned.
*

Here links to a couple of articles about the Hitler Diaries, written by people who worked for the Sunday Times when the ‘exclusive’ was published:

There's a book, too: 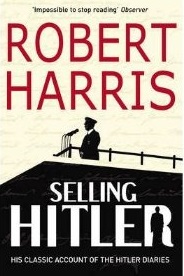 If you Google "Ern Malley" you will find another literary hoax - one that had a great impact on Australian literature (mostly poetry). The fall out from this was felt for years. The chief "victim", Mas Harris, was never able to fully live it down. What is interesting though is the effect that the hoax had on the development of the Australian literary scene.

Another good example of generation after generation accepting the assessment by very few people of a famous historical person is that of Mary, Queen of Scots. Close examination of primary sources reveal a different character from the image usually portrayed.

Interesting. There was an article by Eric Naiman in the TLS a week or so ago, sparked by Clare Tomalin's unlucky inclusion in her recent biography of Dickens of a fabled meeting between Dickens and Dostoevsky - that turned out to be a hoax planted many years ago and oft cited by other academics as fact... Minefield.

Very interesting! Also interesting that Kujau managed to write old German script - most of my contemporaries can't read it easily, any more than I can. Aged with tea! H'mm! But it does really show up the dreadful fascination that people have with Hitler and the big Nazis generally. It's like a kind of pornography, I think, this rotten glamour, and it would make people eager to believe the diaries were authentic, as you say, Eleanor. If Ian Kershaw is correct, though, Hitler was too idle to write a diary, even about trivia.