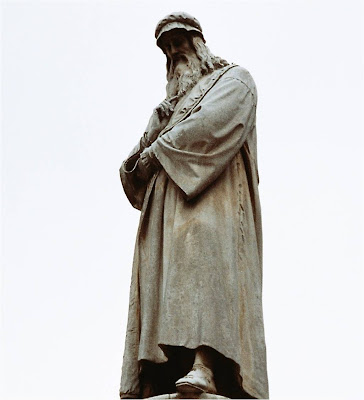 Our most beloved Architect and General Engineer, Leonardo da Vinci, who bears this pass, is charged with inspecting the palaces and fortresses of our states, so that we may maintain them according to their needs and on his advice.
It is our order and command that all will allow the said Leonardo da Vinci free passage, without subjecting him to any tax or toll, or other hindrance, either on himself or his companions.
All will welcome him with amity, and allow him to measure and examine any things he so chooses.
To this effect, we desire that delivered unto him should be any provisions, materials and men that he might require, and that he be given any aid, assistance and favour he requests.
Let no man act contrary to this decree unless he wishes to incur our wrath.

So wrote Prince Cesare Borgia, Il Valentino, illegitimate son of Pope Alexander VI, in the famous pass he issued to Leonardo da Vinci. And such was the reputation of Cesare Borgia that none would dare to obstruct the work that da Vinci undertook for him over a period of eighteen months as this ruthless Renaissance lord captured city after city across central Italy.

It is another enigma of the great genius and polymath of the Middle Ages. Why did Leonardo da Vinci, who indicates strongly in his writings a love of nature and creation and an abhorrence of violence, spend almost two years of his life in the employ of the unscrupulous warmonger Cesare Borgia?

The pass was issued in August 1502. This was shortly after da Vinci had left Milan where he had lived and worked for approximately seventeen years. His patron there, the Duke of Milan, for whom he had painted The Last Supper, had been deposed by an invading French army. King Louis XII of France claimed sovereignty over the Duchy, and, although there were indications that the French court would have liked Leonardo to remain, at that point the soldiers ruled the city. The occupying forces were unruly and dangerous, so da Vinci moved around the north of Italy doing various commissions. But to survive an artist needed a patron (no helpful Arts Council dispensing awards) and it was only by accepting the patronage of Cesare Borgia that da Vinci secured a longer term of gainful employment to support his household.

What is interesting about this period of da Vinci's life is the lack of information. The manuscripts of this man, a compulsive note-taker and sketcher, are scant for these months. It was a time of extraordinary activity in Renaissance Italy: coups and counter coups, scandalous liaisons, horrific acts of revenge, and barbaric instances of torture. Yet we find only a few fleeting glimpses of his life recorded; for example, a brief phrase in a page margin: Where is Il Valentino? Or a sketch of some architecture in Urbino, a city captured that year by Cesare Borgia. Curiously, it is Urbino that has a painting by Joos van Gent called ‘The Communion of the Apostles ‘which predates the da Vinci Last Supper by twenty years. In van Gent's depiction eleven of the Apostles are shown as older men with beards, and one is a youthful beardless figure with golden hair…
As a writer these "lost years" of Leonardo da Vinci are a gift - the opportunity to build a story round the available historical facts. I trawled over all manner of materials, read da Vinci's own writings, his stories, riddles, jokes, puns, fables, studied his works and followed his journeys through Italy. At least, my editor observed with amusement, these research trips are warmer than those undertaken when doing Remembrance, a novel partly set in the trenches of World War I.

When I began to research, The Medici Seal, before the appearance of Mr Brown’s novel, there wasn’t such a brouhaha about everything da Vinci. Now one has to secure tickets months ahead to view ‘The Last Supper’ in Milan, where the tour guides are rapidly losing the will to live by being repeatedly asked "So, which one is Mary Magdalene then?' A guide in Ravenna told me that she is asked the same question when showing tourists the 6th century mosaic of Christ at supper with his Apostles! However, it's these other versions of that scene that underlines the power of da Vinci's version, beginning with his unique choice of the most dramatic moment of that Gospel. Then there is his ingenious composition - the concealed geometry of the painting. It was in ‘The Last Supper ‘that da Vinci interpreted his findings in physics, mathematics, acoustics and proportion. Rather than a formal grouping, it is a painting charged with emotion; his figures the actual visible manifestation of force, displayed in sound, in time and in place. After studying the figure of the Apostle Matthew, I decided to name my main character, Matteo.

Like many people I have an ongoing fascination with Leonardo da Vinci. His paintings are stunning beautiful, his anatomical drawings absorbing, the minute detail engenders respect for his draughtsmanship yet touch the senses in a profound manner, as in the one showing the child curled in the womb. His engineering projects are startlingly modern. In addition to da Vinci's work there were the people he met on an every day basis: the Medici family who were great patrons of the Arts in Florence, and the Borgias, Cesare and his fascinating sister Lucrezia. All of it crying out to me: Write about this! Write about this!

My travels took me to Senigallia.

This town on the Adriatic is famous as the place where Cesare Borgia tricked his rebel Captains into meeting with him and then broke his truce and murdered them. It is recorded that he had two of his Captains garrotted back to back upon a bench. One of them, Vitellozzo, was a friend of da Vinci. It is this incident of the Borgia moving swiftly to eliminate his enemies efficiently and without mercy that Machiavelli wrote about later in his classic work The Prince. While in Senigallia doing location shots for the V&A presentation on my book I was reliably informed by the tourist office that Mary Magdalene's bones were brought ashore there from the Holy Land!

The main character in The Medici Seal, the boy Matteo, is rescued by the companions of da Vinci in the late summer of 1502. Matteo has his own story, a vengeful brigand on his trail seeking to recover a stolen item. The boy becomes an assistant to the Maestro, accompanies him on his trips to the morgue, watches his dissections, holds the Maestro's drawings during his conferences with Cesare Borgia, stands by his side at dinner. There is independent documentation that in the autumn of 1502 the city of Florence sent a diplomat to talk to Cesare Borgia. Their emissary, one Niccolo Machiavelli, met Cesare Borgia in the Castle of Imola.
This was when Leonardo da Vinci was repairing the fortifications there.

Imagine what might happen with Leonardo da Vinci, Machiavelli, and Cesare Borgia, all together.

Okay! I'm on now...hope your book does as well as the Da Vinci code!! Fab post.

Sounds great! Another for the TBR pile.

Thanks guys. I do detest this Spam nuisance which seems to restrict commenting and discussion so much.