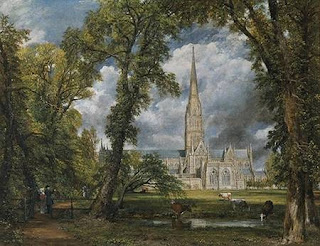 I recently found myself in Salisbury, on my way to somewhere else, and I took the opportunity to go and look at the cathedral. It is one of my favourite cathedrals. I love the purity of the Early English architecture. The cathedral is pleasingly all of a piece. It was built by Bishop Richard Poore and completed quickly in only 38 years from its foundation in 1220 to the completion of the main body of the building in 1258. There  have been relatively few additions since then. Except, of course, for the spire. Salisbury has the tallest spire of any British cathedral and it can be seen from miles around. The spire was a later addition, built between 1313 and 1330. 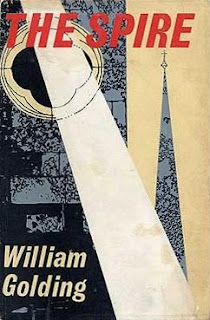 Like many churches and cathedrals, the siting of Salisbury had been fixed on by a vision rather than more practical considerations. A decision was made to move the church and bishopric from Old Sarum, several miles to the north and the actual site was decided by a bow shot. The arrow hit a deer which died on the spot where the cathedral was to be built. Unfortunately, the deer died on low, marshy ground with a very high water table. Too high for proper foundations, so the cathedral's foundations are only four feet deep. Not ideal for the building of a 404 ft spire which would add 6,397 tons of extra weight.

The building of the spire was the subject of William Golding's 1964 novel, The Spire. In Golding's novel the fictional Dean Jocelin is gripped by his own vision to build a great spire, despite the seeming impossibility of building such a tall structure on such shallow foundations. The book is one of the reasons that the cathedral has become a special place for me. I first discovered the novel when I was a young teacher, in my second year. The Deputy Head of Department went on sabbatical and I took over his 'A' level teaching. One of his texts was The Spire. I had not read it before and it is not any easy read. It is not a book which gives up its meaning easily. The reader has to work at it. I found Golding's dense, elliptical, metaphorical style intensely rewarding and was fascinated by the pagan elements within the book. Salisbury is set within an ancient landscape and I liked the idea that there could be of a surviving belief system underlying and untouched by Dean Jocelin's Christianity. This is a novel about belief, faith, vision and doubt and does far more than other novels set in this period, and dealing with much the same thing, to describe and define the medieval mind - and in far fewer pages.

One of the most difficult challenges facing any novelist is to get into the minds of those who lived in the past. Golding manages to do just that. If you haven't read The Spire, I urge you to do so. I will certainly be reading it again.
Posted by Celia Rees at 00:30

I haven't read The Spire, but I enjoyed Sarum by Edward Rutherfurd which tells Salisbury's story from Stonehenge, through the settlement at Old Sarum, the building of the Catherdral to the present day.

I'm a sucker for Cathedrals but have never been to this one. Love this post!

Thank you for reminding me about the Golding book. Salisbury is an amazingly beautiful cathedral but I'm not sure I'll ever be able to go inside now I know the depth - or not - of those foundations.