THE HOSEPIPE AND THE BUCKET OF FROGS by Eleanor Updale

How do you See the past?  I don't mean the wigs and the crinolines.  I'm talking about whether there's a place in your head where you visualise passage of time.

I got to talking about this with a friend of mine who experiences synesthesia.  She 'sees' abstract concepts in colour (Monday is blue, Tuesday yellow etc).  Comparing notes, it turned out that we have two, very different, internal images of history.  After a lot of sign language and struggling for words,  we boiled them down to 'hosepipe' versus 'bucket of frogs'.
That led us on to wondering whether our different perceptions of the passage of time provide an explanation of why I liked history at school while she hated it.

I'm rather scared of writing about this.  I think I'm afraid that if I go into too much detail, I will lose access to the mental image which is one of the tools of my trade.  It's much more fragile than a picture.  My caution is rather like the feeling many of us  have when writing a book.  We don't want to discuss our work in progress - not because we think our ideas might be stolen, but because of a hunch that conversation may contaminate them or, worse still, turn them to dust.
I've never been able to understand how some authors willingly share their ideas on on the internet and at writers' groups - even asking fellow members of online forums for advice on what to do next - but many do, and are clearly relaxed about it.  We're all different, as we should be.

Despite my fear, I'm going to risk trying to explain what I see in my head when I read, write, or talk about the past.  And I'll just have to hope that It won't have crumbled away in the morning.

In my mind, there's a very definite physical positioning of the dates involved.  It's not a 3D picture, or anything as rigid as a text-book timeline, and there is no colour, but every date or era has its position.  If somebody mentions, say, 1832, I know where to go to get it.

Here's the best image I can think of to explain this - though it's not the actual image in my head.  It's rather like one of those garden hoses on a reel.  I'm the reel, and I stay in a fixed place. 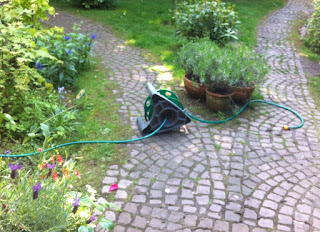 In this photo, the past is the hosepipe trailing off to the left, with the most recent dates closest to the reel.  the future is the pipe on the right  (much less distinct in my mind - even quite foggy at times).
But it's not quite as simple as that.  Though I know exactly where to go to find 1832, when I'm examining it closely, I reel it in much nearer, though never right up to me.  When I've finished, or if I break off to think about, say, 1955, it springs back to its original place.
If I'm looking at events in minute detail, the span of hours or days takes up the whole of the original space back to 1832's original position.  But if I want 1832 again, It snaps back, and all the minute stuff concertinas to make room for it.

That's roughly it for me.  Odd, but orderly.  For my friend, everything from the past is muddled up.  If you ask her to 'find' 1745, she has to plunge her hand into a bucket of dark slime, and root around for it.  Each date or event is like a rotting potato or a slithering frog: distinct, and unlinked to the other objects in the bucket, apart from sharing the stinky sludge.

I won't go as far as to suggest that this says anything about the way we were taught at school (though she is younger than me, and I was a product of the era when History was, in the words of Alan Bennett 'One *%^%**$ thing after another').  I think our brains are probably just wired differently. But it must be difficult to think about the past if you can't get a handle on what happened when, and have absolutely no idea of cause and effect.
I can sympathise with that because my friend's problem with history parallels mine with geography.  I simply can't remember how the countries of the former Yugoslavia fit together, or picture where Brighton is in relation to Folkstone.  My husband tells me that part of my brain is missing - a part that is particularly well-developed in the humble pigeon - but that's another story.

Anyway, it would be interesting to know what the past looks like in your heads.  Is history a hosepipe or bucket for you -- or perhaps a beautifully organised linen cupboard, a maze, a jewellery box or a helter skelter?

This was a fascinating post ! I too have synaesthesia and see letters and names in terms of their colours. My husband sees history in 3-D as if he were in the centre of a wheel with the various ages of the past radiating out around him,like the spokes. I see history as if I were standing on a meandering tape measure with various centuries linking up to where I am now.it's a convoluted ever moving marker.the future is ahead but not yet definite.very thought provoking stuff !

I am also a synesthesic. This is another thing I had never realized synesthesic people saw differently. I never thought this was another difference?! It just is my memory - if you see what I mean?! Much like the author my Synesthesic brain see's the past on the left - and the future on the right. It is like an unfolding pop-up map of images with dates - rather like a measured ruler. It's hard to explain in words so others can understand. It's very orderly and is perhaps why I enjoy history so much and have such good recall - as it's all neatly stored and to hand? I never realized others delved in to a bucket of frogs to recall? How messy is that! x Aren't minds fascinating things.........

A hose-pipe, yes, but with wibbly invisible chunks between the bits I go to frequently ... but without a definite correlation between their (wibbly bits') length and the length of time passed.

It is a great post!
My first thought was that I see history simply as one of those time-lines you find in books. But as I read more of Eleanor's post, I realised that my time-line is much more like her hose-pipe than I'd thought.
My time line does go back into the past on the left - but I think mine is more like a slide-rule. There's a 'marker' which slides back to the place I want: and there's a handy magnifying lens on the marker which then enlarges the period I want to look at. Like a slide-rule, it neatly folds up again.
Does the past extend to the left because we read from left to right? So what we've already read - the past - is to the left.
Odd that we don't see the past as going behind us - I think in some deaf languages you indicate past time by pointing behind you.
I'm not synaesthetic, but when Eleanor made me think about it, I realise that the different periods do have different colours for me. I think the colours are influenced by paintings I've seen from different periods. The Tudor period is cramoisie - the Viking Age, for some reason, is tawny, lightening to yellow in places. The French Revolution is purple and green.(I'm reading A Place of Greater Safety at the moment and wow! is all I can say, just wow!)
But if you see any subject as a confused bucket of slimy frogs, how could you possibly make sense of it or enjoy it? - There's a whole new theory of education here! Teach them to sort out the frogs before you begin to teach.

I think a cash register, one of those big old brass ones you can only find in the museums and reenactment communities. Push a key and the era or date pops up and the drawer opens with all the data inside.
Of course I must explain, my brain is a confusing place. Not nearly that neat and tidy!
The inside looks like the inside of a lighthouse, with a ramp instead of stairs,with rooms leading off on every level at random intervals.
Each room is full to the rafters with books, papers, pictures, paintings and other personal ephemera.
Some of it is neatly stored in wood cabinets with glass fronts, curio cabinets, bookshelves, wood file cabinets and tables with comfy chairs and beaded stained glass lamps to read by. The rest is strewn around like a graduate students bedroom on finals night.
Some of the drawers and doors are open, papers and books are piled on every surface, some of which are open and marked with knick-knacks to place-keep.
so once I find the thing I'm looking for I can drag out an amazing amount of detail to surround it.
It's finding where I've put it in the first place that is at times difficult.
words to finish a sentence for example, I can see it in my minds-eye but the word to describe it?
I usually have to chase the word around a bush, till someone else pulls it out of their heads!

Susan Price has expressed very vividly how I I imagine the past....fab post!

I love Momma Bear's description! I wish I lived in her mind!