Just over a week ago, I went looking for a piece of medieval Bristol… in Wiltshire. At Stourhead to be precise – that beautifully landscaped product of an 18th-century banker’s vast wealth, now owned and tended by the National Trust. There, beside a lake, stands a medieval High Cross that originally had its home in the centre of Bristol, at the intersection of Corn Street, Wine Street, Broad Street and High Street.

It is shown in situ in this 15th-century book by Robert Ricart:


How, then, did the cross come to be at Stourhead?

The cross was built circa 1373 (replacing an older one that had stood on the same spot), and was constructed to celebrate a charter granted to the city that year by King Edward III. In gratitude, the citizens included in the cross’s decorations a statue of Edward III himself, accompanied by the figures of three of the city’s past royal benefactors: King John, Henry III, and Edward IV.

In 1633, the cross gained in height, with a new layer of niches being added. These niches contained the seated figures of Henry VI, Elizabeth I, James VI & I, and Charles I. 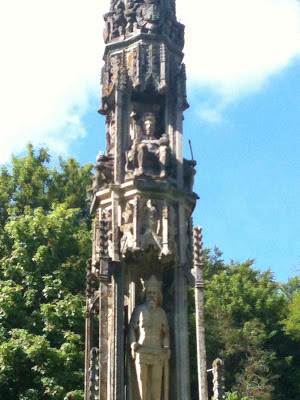 However, by the 18th century it seems that crosses such as this were not held in very high regard. High Crosses in Gloucester and Coventry were destroyed in 1749 and 1771 respectively. By 1733, Bristol’s High Cross was deemed to be an obstruction to traffic. A 1789 account (see here) records that, in addition to this problem, a silversmith who lived beside the cross offered to swear before the city’s magistrates that “every high wind his house and life were endangered by the Cross shaking and threatening to fall (though this was not generally then believed) and so requested its removal.”

I wonder whether the silversmith lived in this building (below)? Built in 1676, it was known as The Dutch House, and the cross would have been right outside it.

Whether he was a Dutch House resident or not, the silversmith succeeded in his campaign, and Bristol’s cross was dismantled and “thrown by in the Guildhall, as a thing of no value”, as the 1789 account tells us. Sometime before 1750, however, it was rescued by a group of wealthy citizens and re-erected outside Bristol Cathedral on College Green.

Its new lease of life, however, did not last long. In 1763, a fresh campaign succeeded in having the cross removed for a second time. The reason given was that it obstructed gentlemen and ladies from walking eight or ten abreast, as they evidently liked to do. The plan was to set the cross up elsewhere in Bristol, but this was never carried out. After five years spent in pieces in a corner of the cathedral, the cross was bought by the banker Henry Hoare, owner of Stourhead, who had been informed of its plight by his friend Dr Cutts Barton, the dean of the cathedral.

Sad though it might be that the cross cannot be seen in its true home today, its perambulations have been its salvation. If you click here you can see what happened to The Dutch House in 1940 – there is no way the cross would have survived had it still be standing in this street.

The same is true, incidentally, of another piece of medieval Bristol that has ended up at Stourhead. This edifice (below), was built circa 1474 to help protect a large spring, known as St Edith's Well, from the unsanitary conditions of the street in which it stood. Since the well stood close to St Peter’s church, this became known as St Peter’s Cross, and then - after pumping equipment had been installed some time before 1546 - as St Peter's Pump (or, marvellously, 'Saynt Peter's plumpe' or 'Saint Peter's Plompe'). It was rebuilt (or perhaps comprehensively repaired) in 1633, but later - like the High Cross - fell victim to the 18th century's enthusiasm for clearing the way for traffic. When in 1766 Henry Hoare offered to remove it at his own expense, provided that he did not have to pay for the stonework itself, the local trustees in charge of the area jumped at the chance.

(At some point, as can be seen below, the building had lost its upper portion, including the actual cross. Everything above the niches containing the figures that you can see here is an 18th-century addition - as is the grotto-like mound on which it stands.)

If you click here, you can see two pictures of the area where St Peter's Pump once stood – showing the obliteration achieved by the Bristol Blitz.

So, in these two cases, a banker’s acquistions have preserved medieval treasures for posterity. And, as you can see from the photographs, the High Cross has been preserved particularly well, though it has lost its paint and gilding… except for the odd trace: 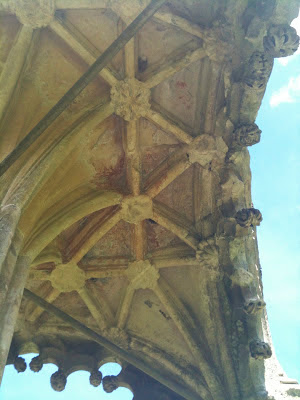 And it has gained a strengthening central post, added upon its arrival at Stourhead. 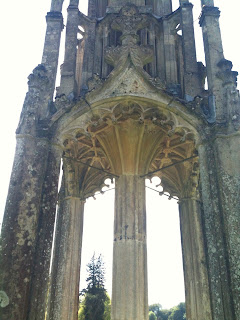 How elegant and delicate the design must have been without it! 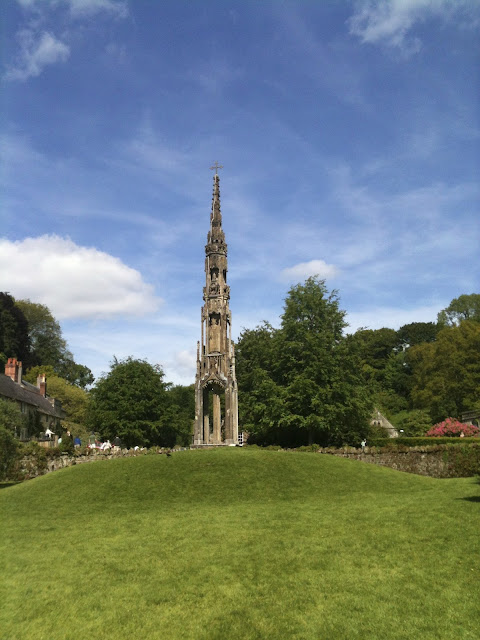 For a fantastic & fascinating collection of photographs of old Bristol, see here.

H.M. Castor's latest novel VIII - a new take on the life of Henry VIII for teenagers and adults - is published by Templar in the UK, by Penguin in Australia, and will be published by Simon & Schuster in the US in August 2013.

What an interesting post, and what a great photographic resource! I have a soft spot for Hoare too - he built Alfred's tower at Stourhead. At least, i think it was him. I've been meaning to ask you - a while ago you wrote a post about Chatterton's house, opposite St Mary Redcliffe. I drove past there a couple of months ago, and could swear I saw a figure - made out of willow, maybe? - sitting on the roof. I couldn't find any mention of it, but don't think I imagined it! Do you know anything about it?

How interesting! I don't know anything about it, no, but I could try to find out... I will be walking past Chatterton's house tomorrow, so I'll have a look - and take a photo if it's there. Will let you know!

I didn't get to Alfred's Tower on this trip to Stourhead, unfortunately, as it was a couple of miles up the road and I'd already exhausted my family by dragging them to St Peter's Pump (which is a long way from the main garden). But I'd love to see it next time we go, as it looks rather extraordinary.

Fascinating stuff. I was actually in Bristol Museum about a month ago, admiring the old map of the city featured in your post and wondering what on earth the central cross was and why it isn't here anymore. Mystery solved!

Fascinating! I've been to Stourhead so often, and seen the cross, and I'd never realised it was the original one; I'd always assumed it was a replica.

What was/is the exact height of the cross both before & after the 1633 addition?
Has there been any comparative analysis of it with the surviving Eleanor Crosses?