Lovey Warne of the New Forest

I mentioned last month some of the ways in which women took part in the smuggling trade. Today, I'd like to say a few words about a particular female smuggler; Lovey Warne.

The Warnes were a New Forest family heavily engaged in the trade. The two brothers John and Peter ran goods in from the coast and their sister Lovey assisted them.

She was a human signal, said to have walked on Verely Hill whenever the revenue men were abroad and a run was taking place. The sight of her in her cloak effectively warned the landers to be cautious. I'm not entirely sure how this worked as normally landers brought goods inland on moonless nights, but that is how the story goes. I borrowed the trick for my own character, Isabelle, who walks along the clifftop at Kimmeridge in a red cloak to give the incoming ship the all clear. In fact the red cloak has even made it on to the book's jacket: 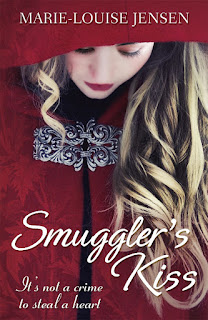 Lovey also wrapped lace around herself beneath her clothes and boldly walked off the smuggling ship and home with the lace to evade the revenue officers - who, as I've mentioned before, weren't allowed to rummage women. Apparently this career came to an abrupt end when she was invited for a drink in the inn by a revenue officer. She dared not refuse and he took liberties with her; his hand stealing to her waist and thigh to check for lace. She only escaped his attentions by jabbing him in the eye with her elbow and fleeing while the landlady sat on him under pretence of tending his eye.

These incidents, too, I have borrowed for Isabelle. They were just too delightful to pass over.
Posted by Marie-Louise Jensen at 00:30

What a delightful and appropriate name is Lovey! Do you think it was a nickname? or perhaps short for Loveday? I loved the way you used these incidents in the book.

I've certainly wondered if it was a nickname or a shortening, Ann. And thank you :-)

Her baptismal name was Loveday, and shortened to Lovey. Her father ran the local inn in Burley--very large cellars, one understands--and the meeting place was by a large oak in the village. Although they lived in Burley, they were considered to be running the Christchurch smuggling fraternity. Her exploits date from when she was around 15 or so (1812), and she was married from Christchurch probably by the time she was 17.

Ah, so Ann was right! I bet those large cellars were worth exploring.