I began writing about history as a student of Anglo-Saxon. Our tutor was registered blind, so five of us sat around each week and discussed sea spray and the feel of heather, and leather tunics, and the morning-cold spear handles of dawn.

Since then I've gone on to eighteenth century history in all its tiny detail, imagining the feel of a begging bowl, a corset, a coin. But this week the Hollywood series for the television channel History, Vikings, has me back in the Dark Ages. I know! At first I thought, this is going to be rubbish. But it's not. It's entertaining and just...good. A bold attempt at depicting the eighth century? That takes time, money and research.

Too often, the people of the Dark Ages, and particularly the Vikings, are portrayed as little more than animals. The Vikings, who in reality were farmers who were running out of land in their own country, are depicted as rabid beserkers. They were a violent race, there's no getting away from it, but they were also a complex one and this series makes a genuine attempt to address that. There is, perhaps, a little too much cross-over with the Anglo-Saxon social convention of the time, but the amount of effort that has gone into making the programme look and feel authentic (if not sound - I'm not sure anyone can nail an eighth century Norse accent) is impressive. I have particularly enjoyed the sailing parts, as the Vikings' mastery of the seas is something we don't yet truly understand.

One of the reasons the Vikings are so badly misrepresented is that although there is much archeological evidence for how they lived and died, there are few resources on paper. They simply didn't write much down. But we do know they were trading as far afield as the Middle East by the ninth century and may even have got as far as Baghdad. They also spread into Constantinople and Russia. Their dominance in the North of England was natural, given that it was good farming land, close to their original home, relatively wealthy and populated by a people who were not naturally as tribal and aggressive.

The series features the famous attack on Lindisfarne in June 793, which in one brief event created the modern perception of the Vikings as crazed, godless warriors. They were, instead, raiders who didn't understand the significance of Christianity. But over the following three centuries, Christianity spread slowly through Scandinavia, changing the structure of society and making it far more like the Germanic countries to the south. That is not the remit of this series however, which dwells on the earlier and more dramatic events.

A very small point, but one I was also impressed with, is the use of colour. For anyone living at the time, almost everything was grey, from most clothing (even if it didn't start out that way) to building materials, to the moment of dawn most favourable for an attack. Colour, particularly vivid colours such as gold, silver, blue and red, were rare and denote a special incident, or a significant act. Usually, television trashes that completely and the noblewomen are clad in green velvet or something that looks suspiciously like satin. But that hasn't happened here. The series also features Ragnar Lothbrok's shieldmaiden wife. Shieldmaidens are an interesting phenomenon of Norse sagas and an interesting contrast to the silent 'peaceweaver' females in Germanic literature of the time.

So, as a sometime 'scholar' of Anglo-Saxon, I recommend Vikings wholeheartedly. To anyone writing fiction in the period, and to anyone interested in it, it will be valuable in terms of period look and feel. And it has Travis Fimmel as Ragnar Lothbrok and as you can see below he's really very...sorry, what was I saying? 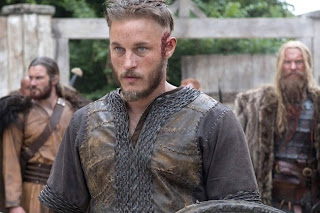 *I am watching the series 'on demand'. It will be returning for another season next year.

Travis Fimmel certainly makes a more toothsome Ragnar than Ernest Borgine, who played him in the movie "The Vikings" :) (Ernest's Ragnar came to a sticky end in King Ælle of Northumbria's wolf pit).

Interesting, and thanks for the tip. I shall look Vikings up on Tivo.

There's archaelogical evidence that Viking trade - and possibly the Vikings themselves - reached the far North of Canada, and as far south in America as the Carolinas.

Just tried to comment and Blogger ate it - grr! This is a lovely post, and I love the sound of you and your tutor thinking your way back into the sensations of the viking world! Sadly, I can't get the history Channel - wish I could!
I'm not sure about the overall greyness of the clothing, though. Coloured dyes were available, though not as bright as we're used to seeing around us today. Coloured Iron Age twills have been found preserved in the Hallstadt salt mines, with dyes ranging from browns, greens, blues and reds. You can see a scrap of cloth at this link if you scroll down http://annajuan.ch/review-2nd-international-symposium-on-hallstatt-textiles/ - and I have a feeling the general impression of Iron Age woollen clothing would have been of soft, warm, blended colours and patterned weaves.

You've made me want to watch this - off to find out when it's on. Thanks!

I checked this one out a while ago (Gabriel Byrne? Count me in!!!) and was also very pleasantly surprised with how good it was!!! It just takes a bit of getting used to the dialogue, but the story and ambiance are fantastic!

Sounds great! Maybe it will come out on DVD. Gabriel Byrn? My first memory of him is seducing Ygraine in Excalibur without taking off his plate armour!

How can I find this? Is it on at the moment?

Those Vikings got everywhere! I loved Margaret Elphinstone's Sea Road, which is about the life of Gudrid Thorbjarnardóttir, a Viking woman who travelled to North America. For years her story in the sagas was thought to have been fictional, but in more recent times archaelogical evidence in Newfoundland and Iceland have proved it was certainly feasible.

(Make that Ernest Borgnine, btw- the curse of the typo strikes again)

I do like the sound of this, although I may have to wait until the box set. The Vikings are so much more interesting than the way they are usually presented.

Incidentally, I don't know if you follow Horrible Histories, but they had this rather familiar-sounding tribute to the quieter side of the Vikings.