Recently I’ve noticed an increase in the number of women of a certain age wearing purple. Is it the influence of Jenny Joseph’s treasurable poem Warning? Or are more women waking up to the fact that as the skin tones fade and hair turns to a vague shade of elephant’s breath a touch of purple really peps things up? I don’t know. But it got me thinking about purple. It’s one of those love it or hate it colours.


Purple has had a patchy history. It famously had its first heyday with the Romans, but the Phoenicians are credited with discovering how to obtain it and use it, and actually the Minoans were probably ahead of the Phoenicians. Sea snails were the secret, and a very costly and smelly one at that. Each sea snail contains only a tiny drop of colour which it uses to protect itself from predators, so tons of the creatures were required to sustain the dyeing industry in the ancient world. 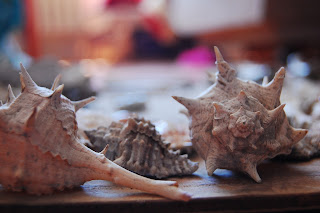 There are many varieties of sea snail. The two most prized for the extraction of purple were Murex trunculus, which produced a blueish amethyst purple and Murex brandaris which gave a more crimson shade of fuchsia. Whichever was used the rotting flesh of these little creatures made an almighty stink which is why dyers’ establishments were always to be found on the outskirts of town. St Luke mentions a practitioner of the trade in his Acts of the Apostles: ‘Lydia, a seller of purple’ and evidently a well-to-do business woman who was encountered by St Paul on his journey through Thrace.


So purple used to be costly and therefore the privilege of the high-born  -  the Romans had a word for it, porphyrogenitus, born to the purple  -  or of the arriviste.  According to Lucan, Cleopatra had it draped everywhere. And the Romans took purple very seriously. Nero would have you executed if you had the temerity to wear it. Diocletian though, saw its economic potential, taxed it and encouraged everyone to buy it.  But purple eventually faded from the scene, until the mid 19th century, when William Perkin enters the story.
Perkin was something of a schoolboy prodigy and by the age of eighteen was studying at the Royal College of Chemistry. His teacher was interested in creating a synthetic form of quinine, very expensive in its natural form and much in demand for the treatment of malaria. He set Perkin a kind of vacation project, to see if something useable could be created from aniline, a vile-smelling product of coal tar. One can imagine the inner conflict of poor Mrs Perkin, on the one hand proud of her lad William, and on the other obliged to live with the smells issuing from his attic laboratory. No doubt their neighbours on Cable Street in Shadwell voiced a few opinions too.


William Perkin didn’t get as far as making synthetic quinine. He noticed a vibrant purple colour produced by one of his experiments, tried, very successfully, dyeing a piece of silk with it and, bright boy that he was, named it mauveine and patented it. The rest, as they say…  Queen Victoria saw the colour, loved it, ordered a gown in it. Napoleon III’s wife, Empress Eugenie, took it up too, and William Perkin did very well out of it financially which must have been nice for his Mum but little consolation for their downwind neighbours. 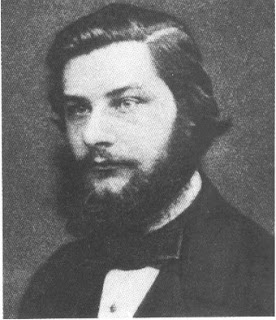 Perkin was part of that great Victorian explosion of invention, discovery and commercial canniness. He lived long and patented other dyes, including one to which he gave his name, Perkin’s Green. But that’s another colour and another story for another day.

You are perhaps seeing the women of the Red Hat Society - they seem to have fun, and among the costuming fun they indulge fantastic, sparkly brooches and necklaces, purple dresses and suits, and - per the name - charming red chapeaux.

I posted about Perkins myself not long ago - some of the original aniline-dyed clothing is the most remarkable eyeball-smacking sumptuousness.

I love purple - always have. In Flann O' Brien's 'The Third Policeman' there's a tin of paint, in a colour which has never before been seen by anyone, which is used to paint a bicycle, with a view to scaring people who see it. I have spent many, many hours trying to imagine what this colour looks like - and all I can manage is 'sort of purplish.' So purple always has an attractive strangeness about it for me.
Poor little sea-snails, though! The very thing meant to protect them from predators is the very thing that got tons of them slaughtered.

As long as it's not the "Old Lady Purple Rinse". That's not a good look; it just isn't. For anyone.