I think it’s partly the mystery, the unknoweableness of the past that makes it so compelling - isn't it? And why is it that some objects from the past can seem so much more peculiarly intense than others? It’s as though along the way they’ve somehow absorbed tiny aspects of previous lives or previous contexts and concentrated something of those existences into an actual, physical potency. An object like this rare 17th-century English glass beadwork basket, currently on display at the Holburne Museum in Bath, certainly has that: 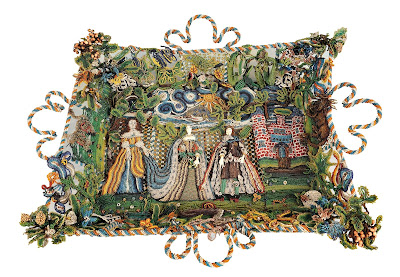 I was quite taken aback by its charisma – if an object could have such a thing – when I saw it last week, laid in its display case, where the museum has an urgent appeal for donations towards its purchase. At first glance it looks quite mild; pretty enough, a fine, colourful object made painstakingly with skill and quality materials. But look more closely and abruptly it seems crawling with verdant nature, almost disturbingly intense, like a vivid dream of a sampler or tapestry half-manifesting into an animate state. I’m not exaggerating – it really does have a spooky, hyperreal quality.

It’s made of small beads of glass, coral and wood that are threaded in sequence onto fine wires and sewn into place on the wire mesh frame of the tray-shaped basket. It depicts three figures standing beside a turreted castle. Tumultuous clouds, in twisting beady ribbons of blue and white like a Van Gogh painting, scud across a swirling, sunny sky above them. The pastoral scene is crowded with flowering and fruiting plants, dotted with creatures and cross-hatched with beadwork.
The figures are believed to represent King Charles II with his Queen, Catherine of Braganza, attended by a lady-in-waiting – and it’s likely to have been made in about 1665, in celebration of their marriage and the restoration of the monarchy. Catherine of Braganza was a long-suffering though loyal and loving wife. Daughter of the king of Portugal, she endured three miscarriages (never producing an heir to the throne), the famous Popish Plot led by Titus Oates, plus the ignominy of the existence of a string of the king’s mistresses.

One such prominently favoured mistress was Barbara Palmer, nee Villiers. It would have been impossible for Catherine to ignore her presence, as Charles gave her the position of the queen’s Lady of the Bedchamber. (Barbara later gave birth to Charles’s illegitimate son and was made a duchess.) Could she possibly have a similarity of feature to the third figure in the bead tableau - she certainly caught the public imagination, is it inconceivable that she has a subtle mention in this beaded portrait too?

The glass beads themselves are beautiful, still rich in colour (where a sampler of the same period would be faded to more muted colours). They were mostly likely imported from Venice and the Netherlands, and the head and hands of the King and Queen are of the finest quality lampwork.

It’s probable that whoever made this basket was little more than a child herself – young educated girls in the 17th century made samplers and were taught fine needlework as a matter of course – but this seems like a very special example. How did she learn to bead so ambitiously, with so much craftsmanship? How long did it take for her to finish the object, and what happened to it afterwards – was it a gift for an occasion, a wedding or christening perhaps? Tessa Murdoch of the V&A describes the basket as being, ‘…in astonishing condition and a remarkable testimony to the domestic needlework skills of women and teenage girls.’

It’s very satisfying to imagine the maker plotting her design, waiting for her order of beads to arrive, impatiently spilling them out of their packets, gloating over them and letting them run through her fingers like bright seeds or beans. It’s hard not to wonder where and in whose house was the finished thing proudly displayed – in front of a window, maybe, glinting in sunlight, or on a candlelit table for visitors to admire. And above all, who was she, the maker? Likely we’ll never know, but then sometimes the best thing about history is the mystery, and the sheer guessing-game nature of it. 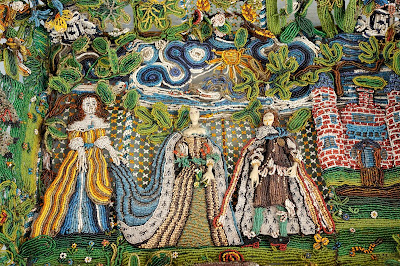 So! Here’s where you could come in. The Holburne Museum in Bath is appealing to acquire this basket for its permanent collection. They need to raise £6,000 through public donations to match another £78,000 being sought through grants – and the clock is ticking as the deadline to raise the cash is July!

The DONATE program enables people to make contributions of £1 or more via smartphones, when and where they please. Click here to donate now. If the Holburne can secure enough money, it will be the only place nationally to have a beadwork basket on permanent display. (Otherwise, it’s very likely to leave the country…)

A really engrossing blog to come back to, on my return from holiday. I did enjoy it. The Holburne Museum is a marvellous place!