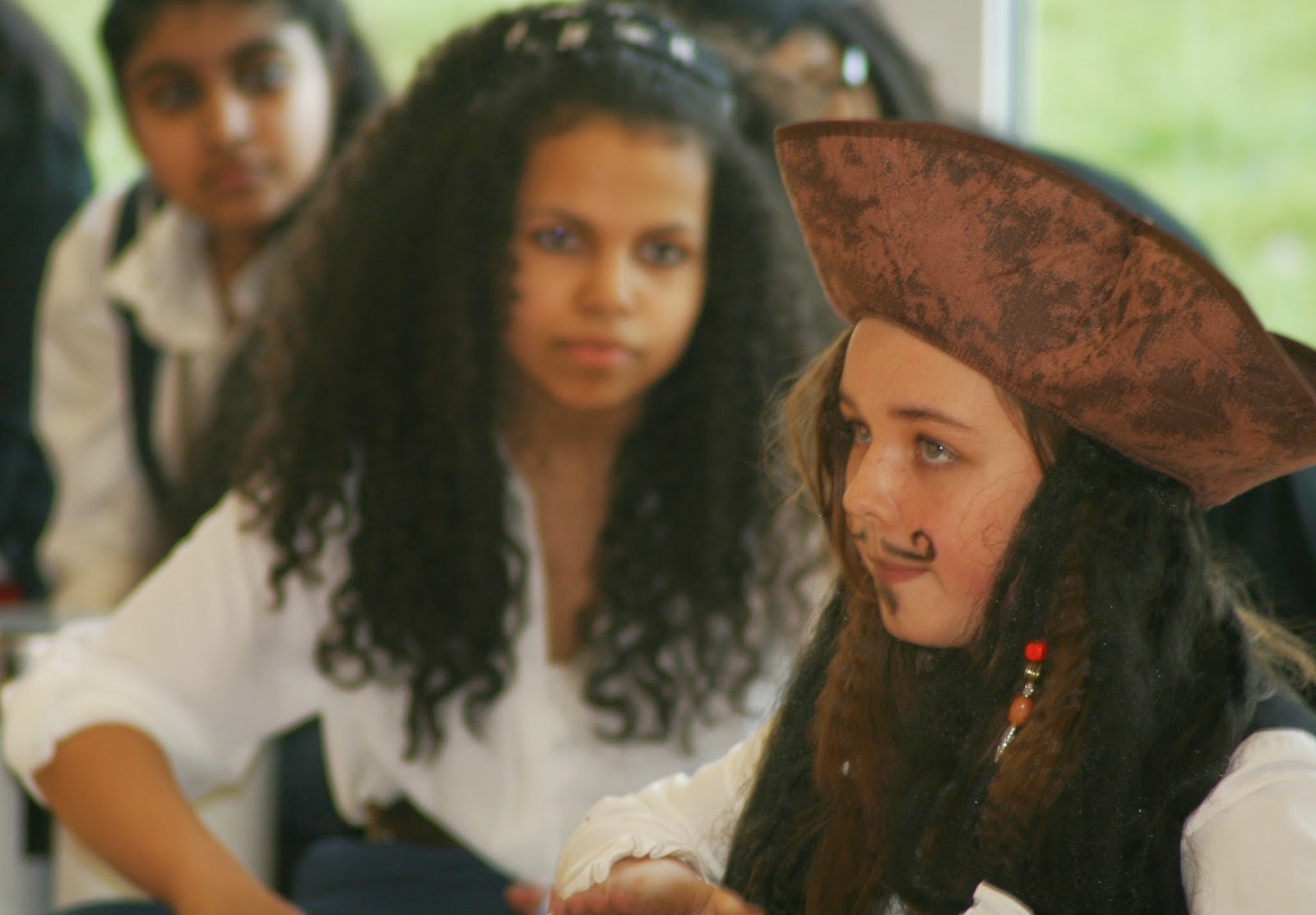 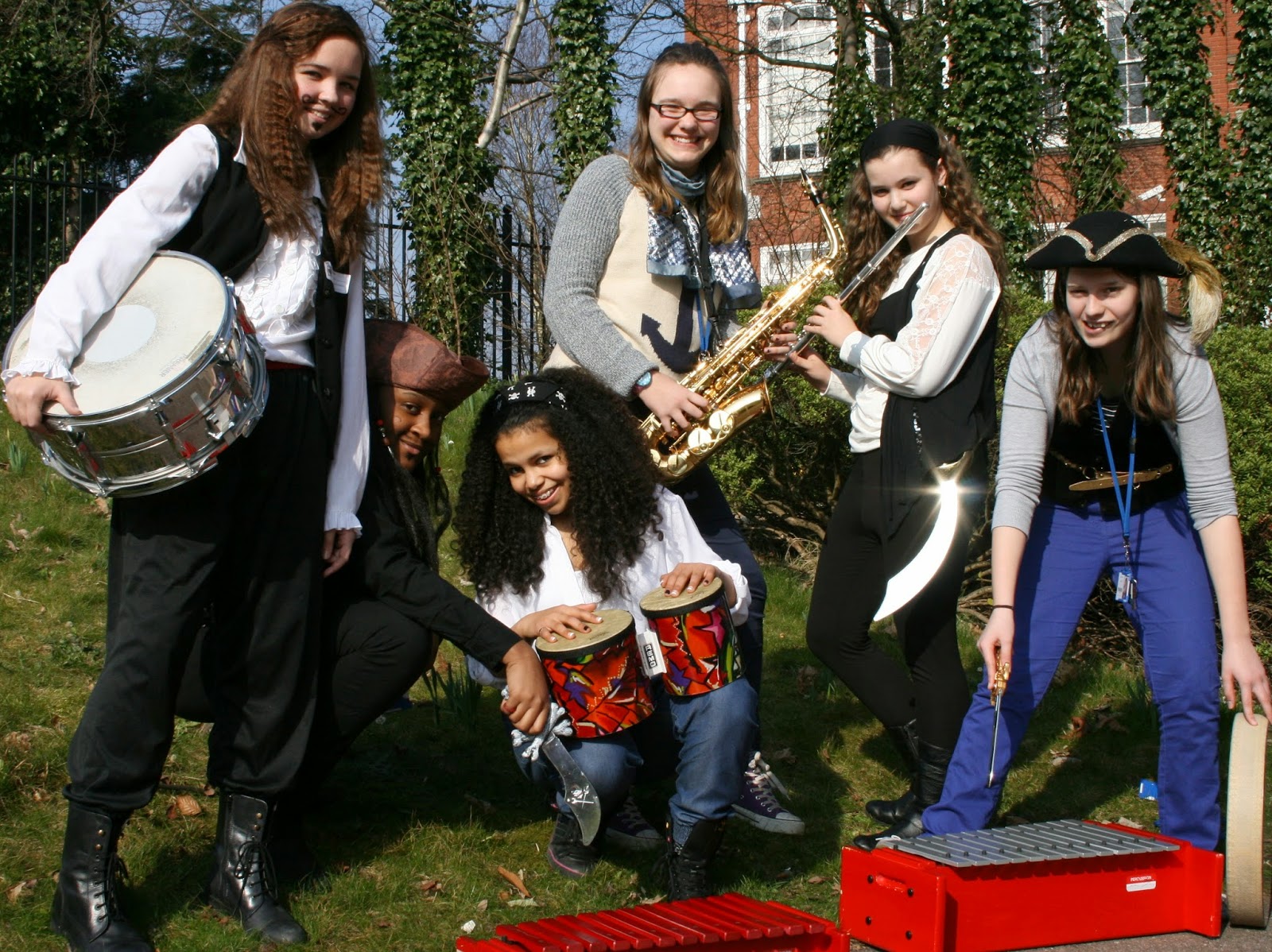 For the past couple of years, I've visited King Edward VI School, Handsworth, on or around World Book Day. The whole of Year 8 dress up as pirates, along with members of staff, and we have a jolly day of workshops in music, dance, drama, art and creative writing, all  based on my book Pirates! Lots of piratical fun.


I didn't write Pirates! as a dressing up option for World Book Day but I like to think I've made a contribution. A pirate outfit is easy to put together and ticks most of the boxes described by  Caroline Lawrence in her excellent History Girl post on 9th March, Dressing Your Hero.

When Caroline asked fellow History Girls for World Book Day dressing up suggestions based on characters in our books, I naturally volunteered Pirates!  The pirate outfit is iconic and  instantly recognisable and there is a reason for every part of it.

The skull and crossed bones is a universally recognised symbol of death. Its use stretches back to the Middle Ages and it still signifies poisonous materials. It was routinely used in the margins of ships' logs to make a death on board. This is probably where the pirates took it from. The black or red flag marked with the skull and cross bones was a potent warning to ships to heave to and surrender. 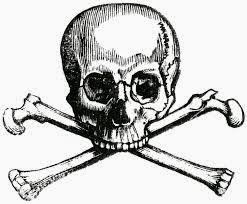 Although the skull and cross bones was the generic flag,  pirates liked to personalise so that ships would know, not just that they were being attacked by pirates, but specifically  by Blackbeard or Black Bart Roberts, or some other notorious pirate.

The dart pointing at a red heart on Blackbeard's flag, top left, meant no quarter. If there was any resistance, everybody on board would be killed.  Back Bart had two flags, the first (just below the centre), shows him drinking with death, the flag beneath shows him balancing on skulls representing Barbados and Martinique. He had a particular dislike for these islands and any ship hailing from either could expect no mercy.

What about the rest of their clothes? Pirates liked dressing up. The flamboyance often associated with pirate captains came from their habit, when plundering a ship, of taking the richest clothes, velvets and silks, for themselves.

It is not hard to see where Johnny Depp's look came from in Pirates of the Caribbean.

We owe the sartorial detail to this work:

The author, one Captain Johnson, was really Daniel Defoe. He based his History on contemporary sources, interviews and letters. The History proved wildly popular and ran to several editions. It is still the best source book on pirates. Nearly everything in later books can be found between its pages and, because it was written by Daniel Defoe, it is as exciting to read as any novel.

Daniel Defoe was the first to detail the adventures of these two most notorious pirates:

'Most notorious' because they are women. This is a particularly telling image. They are depicted with their shirts open. We can clearly see they are women by their breasts. This is not an 18th Century version of page 3; it has a far more serious purpose. They have to be shown in this fashion because in every other way they are dressed like men. They are wearing the short jacket, loose trowsers, soft hat, and latched shoes of the sailors of the time.  Their breasts show them to be women; their weaponry - short, curved swords for fighting on board ship; several pistols for quick firing: axes for cutting ropes when boarding - shows them to be pirates.

I didn't have to go much further than Defoe's General History to find the descriptions I needed for my pirates, or for the reasons they dressed they way they did. Everything about their appearance tells us something. They dressed like sailors, because that is what they were before they became pirates and they would still be wearing the distinctive, practical clothing needed for life on board ship. The  major difference in appearance between a pirate and a sailor would be the weaponry the pirate had slung about him (or her).

Even the most popular images of pirates tell us something about pirate life.  Take  Treasure Island's Long John Silver. His peg leg and parrot have become popular cliches but there are good reasons for both.

Parrots were routinely brought back by sailors from tropical parts, as pets or to sell. A broken leg was a common injury, sustained when falling from the rigging. The limb was often smashed so badly that it had to be amputated. For an ordinary sailor, this could mean the end of a life at sea and he might well be put off at the next port. A one legged sailor was of little use on board ship but pirates looked after their own. An injured pirate would be given compensation and kept on in some capacity, probably as cook. Similarly the iconic eye patch. Eye injuries were common from flying ropes'  ends but, again, a pirate blinded in this way could expect to be protected.

'A short life but a merry one' was a pirates' saying and it was certainly a great deal better than life on board naval or merchant ship. Aside from the primitive health insurance, pirates could expect a fair share from any prize taken and it is no wonder many answered the call, who will go? The spoils could be enormous, pirates could live (and dress) like princes, but that has to be set along side the risk. Any pirate caught and sentenced could expect to share the fate of Captain Kidd.

A short life but a merry one, indeed.

What fun this post is, Celia. I suppose we all wanted to be pirates when we were youngsters. I cannot think of a more joyous way of spending World Book Day.

I think one of my favourite times at my old place of work was when we decided to recreate 'Treasure Island' for the Easter celebrations - much time was spent in constructing cardboard 'cannons', an old ship's wheel was commandeered, and the retail staff even managed to turn some old sheets into rigged sails. On the day, everyone (from reception desk to director's office) dressed up in piratical gear...

The first time I went to King Edward's the whole school had embraced pirates, from the headmistress downwards. It is wonderful to see sober, sensible Librarians and English teachers dressed as doxies and desparadoes and I suspect they enjoy dressing up as much as the girls.


Excellent, my hearties. Will be sharing this post with my girls who are a fair hand with a sword already.

Avast there, Clare. That's what I like to hear!

Fascinating! My grandkids are very keen on pirates, but too young for your book as yet. I look forward to introducing them to it, particularly the girls (though they are the two youngest, so it will be a good many years before they're old enough)