I’ve always been fascinated by different accents and verbal mannerisms.  I find them so interesting that on occasion I slip into mimicking the person I’m talking to in an attempt to literally capture their voice in my head.  Before I can stop myself, I find I’m turning a Kiwi or a Texan;  a Scouser or a Glaswegian. (It’s amazing I’ve never been thumped!) 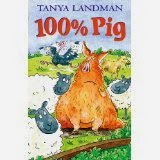 I love writing in the first person - for me, it’s the best way of climbing inside the story - so getting a character’s sound right in my head is essential.

Hearing voices all started with 100% Pig (A&C Black).  It wasn’t the first book I wrote, but it was the first one to appear in print.  I’d already decided the hero was a Tamworth pig on the run from the sausage factory.  My plot was sorted. But how to tell it?  How did he speak?

The answer came in the middle of the night.  Terence – a custard swilling egomaniac with a fine Australian accent – rootled his way into my dreams and started talking about his impeccable pedigree.

Once I had his Aussie accent, there was no stopping him.  I wrote the first draft in a matter of hours, talking ‘Australian’ out loud as I typed so I could capture Terence’s voice.

(I should point out that I’ve never been to Australia.  I learned the accent off the TV as a student, watching The Young Doctors when I should have been writing essays.  Which just goes to prove that, in the life of a writer, nothing is ever wasted!)

As well as comic and adventure books for 8 – 11 year olds  I write serious historical fiction for Young Adults.  Obviously voice is no less important, but with these books it is much more complex.

With Apache I was writing in the voice of a girl for whom English was not her native language.  While I was researching, reading the first person accounts of Native Americans who had lived through terrible times, I was struck by their eloquence.  Their rhetoric had a grace and dignity - a kind of Shakespearean quality that I tried hard to capture.  The same was true of The Goldsmith’s Daughter:  the Aztec accounts of the conquest have a beauty and power that I wanted to mimic. I could hear both girls’ voices in my head all the time I was writing, but speaking their words out loud was a different matter. The Goldsmith’s Daughter was nominated for the Guardian Children’s Fiction Prize and at very short notice I had to dash to Hay on Wye for an appearance at the festival. I was delighted until I was asked to read an extract from the book. Looking at the page I realised that not only did I not really know how to pronounce the Aztec names properly, but that the voice I had in my head was a world away from the south-east accent that comes out of my mouth! I was tempted to keep the reading very brief but I discovered that actually my own accent didn’t matter:  people could hear Itacate’s voice through mine.

As for Charley O’Hara and Buffalo Soldier:  her rich, warm speech flowed inside my head like molasses while she told her story.  (Think of comedian Reginald D.Hunter’s accent  and you’ll more or less have it.)  Listening to it while I was writing was the most wonderful experience.  I hope reading it is the same.

I too hear voices in my head. My favourite part of the London Library is the little philology section, which is packed with old books about Irish, Scottish, Australian slang. Even Parisian slang from the turn of the last century. Reading those books is like eating chocolate - it is all absorbed so easily into the bloodstream, and comes out as dialogue on the page.

Love the title 100 percent Pig! definitely on the shopping list.

Loved the post, Tanya - I thought I was the only one who risked a punch by imitating other people's accents! - They don't understand that we're not jeering, but fsscinated and appreciative.
My younger brother is a very good mimic - he used to while away long hours of boring shop work by phoning other shops in the mall and asking them difficult questions as Sean Connery (among others.) He told me that the secret to capturing an accent is to get the vowel sounds right. So now I compulsively repeat people's vowel sounds - let's face it, we're going to get punched sooner or later.

Lovely post Tanya. I love other people's voices to and am fascinated by vowel sounds. Try and keep this fascination firmly to myself. But especially love London Turkish vowels the 'oo' , and Northern Irish.

The voice in Buffalo Soldier is wonderful, Tania. I think you did it brilliantly. So distinct and authentic.
I also mimic. It's something I've learned to do learning foreign languages - it's the essence of how you learn and how you lessen your own English accent. I had a Canadian friend staying with me once and a few days in, I said something and she stopped what she was doing and asked "Are you mocking my accent?" I hadn't even noticed I was imitating it.
I haven't played with voice all that much in my writing up to now, but it's important in the thing I'm working on now, which is fun.

I meant 'Tanya', of course. Sorry!