I meant to do this month's post on the Museum of Somerset, but yesterday I went to the the new visitor centre at Stonehenge, so that's what's in my head at the moment. It's also kind of the period that I'm interested in writing about at the moment - though not quite: more of that later. 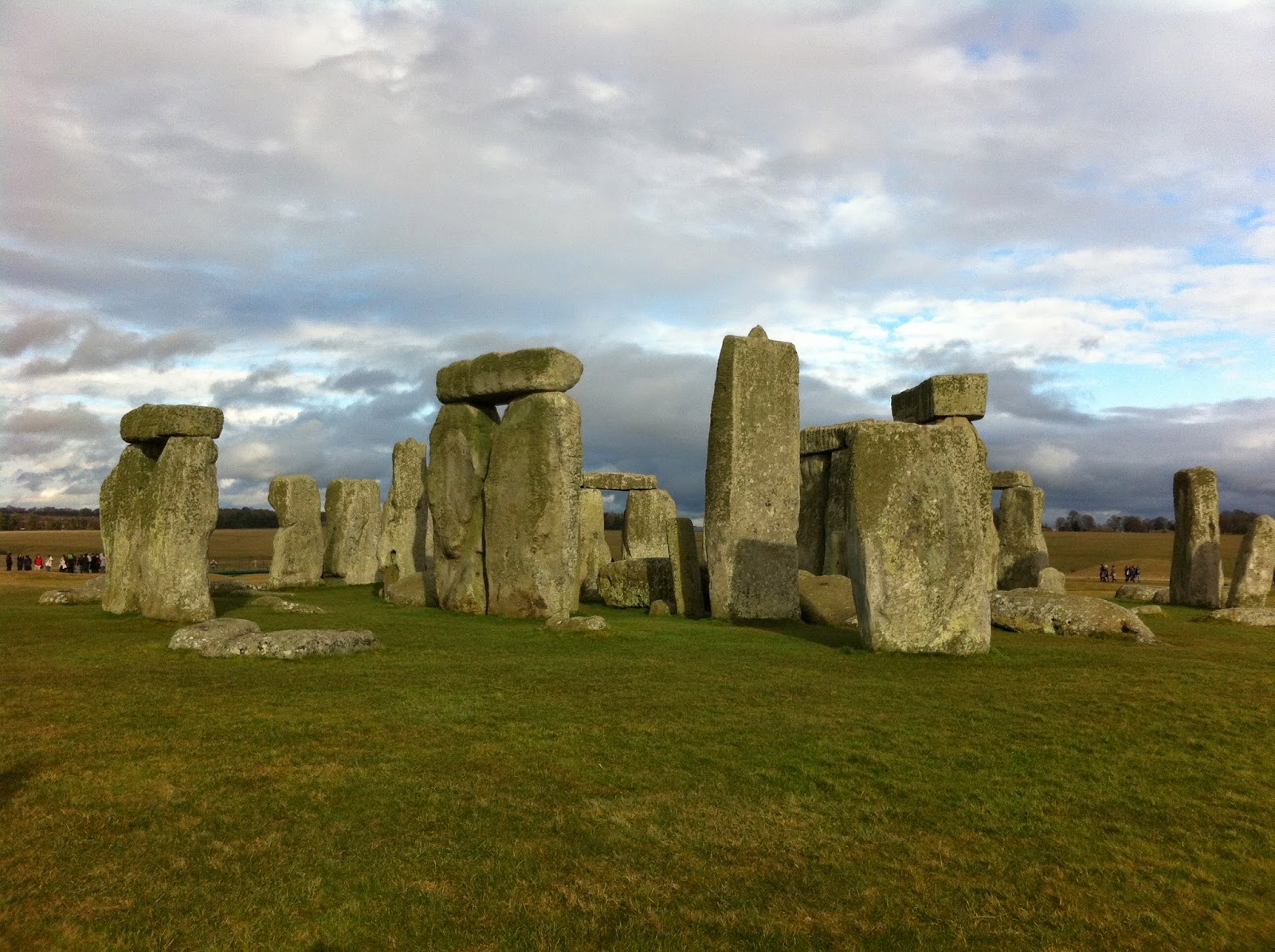 Stonehenge must be one of the best-known neolithic sites in the world. Certainly, the majority of the visitors there yesterday were from other countries, so its fame has certainly spread. The dark stones stand out against the sky, enigmatic and imposing, surrounded by the wide green spaces of the Wiltshire downs. On the ridges overlooking it are barrows; one, now known as Bush Barrow, was excavated in 1808 and found to contain a skeleton, together with several objects finely worked in gold (a breast plate, a smaller, lozenge-shaped object, and a belt-hook), bronze daggers, a bronze axe, and what may have been a stone-headed sceptre. Very Lord of the Rings!

But until recently, the site was contained in a right angle formed by the A344 and the A303. The A303 is still there (it was mooted at one time that it might be put into a tunnel, but that was deemed to be prohibitively expensive) but the A344 has gone, as has the disfiguring car park and the old visitor centre, which used to be just on the other side of the road from the stones.

There is now a new visitor centre at some distance from the site, with a cafe, a shop, an exhibition, and a reconstruction of some of the neolithic houses whose foundations were found at a site near the henge, called Durrington Walls. So, although the busy A303 and the masses of visitors taking selfies against the stones don't exactly add to the atmosphere, still, the setting is now much more in tune with the brooding grandeur of the stones.


Back at the visitor centre, the exhibition starts with two semi-circular walls on which changing views of the stone circle are projected; so you can see at in the different seasons, at different times of the day, and as it might have looked at different stages in its long history. It's a very beautiful display. Then, in the main part of the exhibition are objects that have been found on the site, a timeline, and a video display with different archaeologists talking about what is known about Stonehenge, what is not known, and what is conjectured. Interestingly, some of the things that used to be most commonly thought to be true turn out to be completely wrong. Although present-day druids flock to the site at the solstices, it was not built by druids; that was a mistake made by some of the earliest observers of the site in the 17th century - they didn't know about prehistory, and so, realising the site was ancient, they attributed its construction to the earliest inhabitants of Britain they knew about. And the Slaughter Stone - a horizontal stone whose hollows turn rainwater rusty because the stone contains iron - was never, to the best of current knowledge, used for human sacrifice. In fact there's no evidence that human sacrifice took place anywhere on the site (which rather mucks up the symbolism at the end of Hardy's Tess of the D'Urbervilles, where Tess sleeps on the stone, watched over by the priggish Angel Clare, before being arrested for the murder of the dastardly Alec).


Why was it built? There was a popular theory that the site was a vast astronomical clock - and it's certainly aligned according to the winter and summer solstices, as are many other ancient sites. But most archaeologists are sceptical - for one thing, the positions of the stones on which the theory was mapped turned out to be wrong; the stones were not all in position at the same time - Stonehenge eveolved over centuries. In fact, no-one knows for sure why Stonehenge was built - or why some of the stones were brought all the way from Wales. What was so special about them, that it was worth the immense effort of transporting them from such a distance?

One thing's for certain, though: the society which transported, worked, and erected these stones was not a simple one. The horizontal stones are fitted to the vertical ones by means of a ball and socket joint: hard enough to do in carpentry, but far harder on such immense blocks of stone, and it must have taken the biggest of team efforts to manoeuvre the stones into place.


The reconstructions of the Durrington houses bring that society to life. They are small, circular houses, probably made of wattle and daub with thatched rooves.. There's a shallow pit for a fire in the centre, and furniture made out of wood: sleeping platforms, shelves and benches. It would have been dark and smokey, but it would also have been warm and cosy. A young archaeologist showed us replicas of household objects found on the site: a bone needle, a  rather beautifully made shoe, a piece of quite finely woven material, a decorated pot, a long-handled hammer. And they had music: there was a flute made from bone. Some of those objects found in the barrows were made of materials from far away - gold, and amber: people travelled long distances to come to Stonehenge - perhaps pilgrims, perhaps traders: whoever they were, this was not a world in which small groups of people lived in total isolation.


But here's the thing that fascinates me. It's estimated that Stonehenge was begun 5000 years ago. But humankind had been around for a very long time before that. Last year, I visited a cave in the south-west of France called Peche-Merle. It had beautiful paintings - and they were in the region of 25 000 years old. So 20 000 years before people sat around a campfire in Wiltshire and someone had a bit too much mead and came up with the crazy idea of building a circle of massive stones - 20 000 years before that, human beings had the creative impulse, the skill and the desire, to create pictures which would stand up against anything in galleries today.

What were they like, those people? If we shared a language, would we communicate similar feelings, similar thoughts? When you follow the exquisite lines of some of those pictures, it's difficult to imagine that the artists' sensibilities would have been so very different to our own.

The past - what a mysterious and fascinating country it is!

Thank you, Sue, for letting me know how the Stonehenge site and displays look now. I'm still trying to imagine quite how the "giant sky platform" suggested by today's Spalding theory would work with what we know already.

I'm a bit sceptical about that one, though it's a grand idea. I prefer the 'wood for life' (Woodhenge and Durrington Walls) and 'stone for death' symbolism. But I suppose we'll never really know.

I love the reconstructed interior, Sue!

The Visitors' Centre sounds really good - and no amount of traffic/crowds/selfies can take away the wonder-inspiring-ness, no matter how hard they try!

The only snag with the new centre is that the reception part is open air - roofed but not walled. It was raining when we got there, and the wind drove the rain inside. Felt very sorry for the people in the ticket office - it must have been freezing.

It's well done - but in a way I think Avebury is more atmospheric: less tidy, somehow. But then when you're near the stones at Stonehenge, and if you can forget about the people, there is a powerful, eerie quality about it.