I've spent the last five days in bed, struck down by some kind of World Book Day induced bug, and don't think I've felt so bad since. . . when?  No matter, because this morning, I'm beginning to feel better. I woke with that wonderful sense of health pleasantly returning. I know it's not a holy miracle - witness the meds by the bed - but I certainly feel very blessed in my body, and glad to be able to make it downstairs.

Nevertheless, my head's not a sharp as it should be for wrangling a half finished article, so here, as they say is, a post I made somewhat earlier about today's saintly miracle.worker, St Patrick. Please note that Michelle Lovric has many more books out by now!

Imagine living at a time when the whole year was decorated with different feasts and bright with various holy stories, even if many were a little odd and possibly slightly painful? Once the old church calendar offered a religious tale for almost every day of the year so that - regardless of many less beneficial aspects of the past - there was a rich public pattern that seven-day shopping & the return of the Apprentice may not quite replicate.

Today, the 17th March, is the Feast Day of St Patrick, Patron Saint of Ireland. The web offered images of shamrocked Guinness, stylised leprechauns, fancy dress parades and even – may the man himself help us! - bright green dye for ponds and city pools and waterways. The horror!

To greet Bishop Pat in proper style, one should surely climb up the great hill of Croagh Patrick, barefoot or upon one’s knees.


However, having just read Michelle Lovric’s The Book of Human Skin, I have met this year’s share of penitents. Today's post comes from a warm, comfortable chair. (Do read that wonderful novel, by the way!) 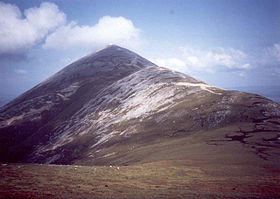 Briefly, Patrick was captured as a boy in Wales, taken as a slave to Ireland, escaped back home, trained as a priest and then, in his dreams, heard Irish voices begging him to return.

So he did, standing up to the druids who opposed his new faith, baptising many with the extreme vigour of an upstart and ignoring complaints from other clergy that he was enticing too many rich young maidens into his convents, and presumably not theirs.

Patrick had such mystic powers that he cleared Ireland of all wicked snakes, even removing all biological evidence that serpents had ever existed there too. Amazing! Christianity with strong, added magic. But what was he like?

St Patrick appears in a story that I had partly heard before, one of the great legends of Ireland and this, again briefly, is it: 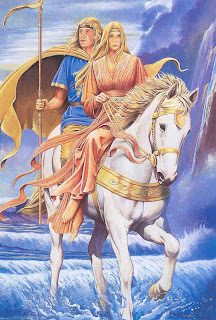 Oisin, the son of the great ruler Finn MaCumhail, fell in love with the beautiful Niamh of the Golden Hair and rode away with her to the Land of the Ever Young. After years of great happiness, Oisin remembered his family and friends, and longed to visit his old home, just once. At last Niamh set Oisin off on a white horse, tearfully warning him never to set his foot on the ground during his travels.

Alas! Hundreds of years had passed. Oisin found grass growing where the walls of the royal palace once stood and nothing was left in the land to show what had once been. Turning his horse, he saw three men struggling to lift a large and heavy rock. Beneath this stone, they told him, lay the Three Treasures of the Kingdom.

Without thinking, Oisin dismounted to help. As his foot touched the ground, all his strength and beauty faded, the years fell on him and he became an old, old man.

Well, the version I’d originally read, or heard, ended there. I’d imagined a quick  crumbling into sorrowful dust with a funeral to see the story off. But no - there was someone who would not leave the weak, wrinkled old man in peace.

As recorded by Lady Gregory - who sadly was not there at the exact time - along comes St Patrick, insisting on taking Oisin into his house and hearing the whole of Oisin’s story, maybe as a holy version of a reminiscence workshop, although Patrick doesn’t seem to treat him very kindly.

Our pagan hero is unable to withstand the holy fellow but he does not give in gracefully.  Oisin laments the glories of the past and is unimpressed by Patrick’s continual questioning, debating and chiding.

Oisin: “O Patrick, it is a pity the way I am now, a spent old man without sway, without quickness, without strength, going to Mass at the altar.

Without battles, without taking of spoils; without playing at nimble feats; without going courting or hunting, two trades that were my delight."

Patrick. "Leave off, old man, leave your foolishness; let what you have done be enough for you from this out. Think on the pains that are before you; the Fianna are gone, and you yourself will be going."

Oisin. "If I go, may yourself not be left after me, Patrick of the hindering heart; if Conan, the least of the Fianna, were living, your buzzing would not be left long to you.”


Too much care in the community, eh?

All of you, Irish or not, enjoy the day, and may St Patrick and all the saints preserve you from any tiresome buzzing!

I'm with Oisin! I wish the druids had been left alone. I can think of a few people today who'd make good sacrifices to the gods.
A great post, Penny - and I second your recommendation of The Book of Human Skin it's wonderful.
As is your own A Boy Called M.O.U.S.E!

Brilliant post. Love the Oisin story, which I hadn't heard before. Returning home only to find everyone gone, all your old haunts now in ruins & overgrown... what a deeply powerful image. Gives me a shiver!

Great post. Happy St Patrick's Day. I love Ireland but haven't been back to the "Old Country" in years...maybe soon. Hope so.

Hmmm ... St Patrick I can take or leave - as you show here, what a terrible meddler the man was. I do have a soft spot for St Francis: but St Guinefort - now there's a proper saint!

Thank you for the story, and Happy St Patrick's Day!
One of my favourite saints is St Neot, patron saint of fish.

I never knew St P was so curmudgeonly. People are awful when they're trying to ram their rekigion down your throat - i suspect the Druids would be just as bad if you had to meet one, Sue - but of course we are reading narratives written after the event, crafted to fit someone's agenda. I know he herded goats on a mountain in Northern Ireland, but I have forgotten which... It had a flat top, I think. Happy St P's day anyway! Leslie

Well worth re-visiting - thanks for putting it up, and feel better soon!

Happy St Paddy's Day everyone! Our saintly Paddy studied down here in the south of France (5th century AD) on the small island of Saint-Honorat, one of the Iles des Lérins, just offshore of the coast of Cannes. I can almost see his monastic cell from our front terrace. There will be a great deal of Guinness flowing about now along the Croisette and in Ma Nolan's pub. I am at my desk, of course. I hope he wasn't such an old stick-in-the-mud, Penny, and I hope you are feeling better.

Happy St Patrick's day, and let's raise a glass to Lady Gregory, if not the saint!