Having waited all day for a ‘guaranteed’ delivery of a package which has not arrived, I find myself wondering if things were any better before our modern courier services.

Since the time of the ancient civilizations there has always been a need for couriers and messengers to deliver valuable packages and vital documents. Both the Persians and Romans established very efficient networks of state messengers, but by the 11th Century in Europe many commoners such as wealthy merchants, town councils and monasteries discovered they needed to develop their own independent courier systems, not least because they wanted to keep their business interests safely away from the prying eyes of government officials, popes and kings. Even universities in the Middle Ages employed their own couriers so that students could obtain money urgently from their families to pay their fees or refill their wine flagons, and these university couriers were given royal dispensation to travel without hindrance. 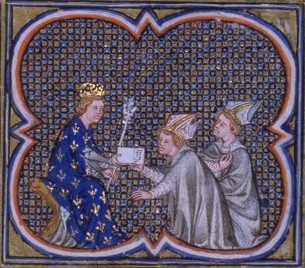 But maintaining a courier system was an expensive business, not only did the messengers have to be provided with coins for food and lodgings on the road, but they needed money to change horses, pay tolls, buy passage on ships or river craft, and they often had to be provided with the funds to bribe clerks and officials so that they could be admitted straightaway to see someone of importance and not kept hanging around for weeks. So it made sense for individuals to band together to finance a courier service between them. One of the first of these was the Scarsella dei Mercanti Fiorentini founded in Florence in 1357 by a group of merchants, who hit on the bright idea of not only using the service themselves, but allowing anyone who could afford it to pay to use it too, whenever the need arose. 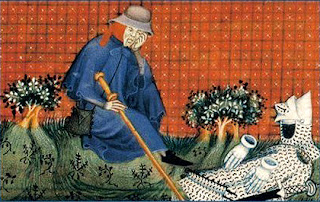 Couriers had to be fit, tough, trustworthy and resourceful. It helped if you could speak several languages as well. On one occasion when a quantity of gold had to be sent secretly from Verona to St Gall, six messengers were dispatched in pairs travelling by different routes disguised as pilgrims. They were warned that if they were caught, the gold would be bound to their legs with their own thigh sinews!

This was probably not an idle threat, since at the siege of Auberoche in 1345, when the French captured a page boy on his way to deliver a message to the English inside the besieged castle, the poor lad was bound and catapulted into the castle from a trebuchet or siege engine, with the letters he was carrying tied around his neck. Unsurprisingly it is said the knights were much ‘astonished and discomforted when they saw him arrive.’ 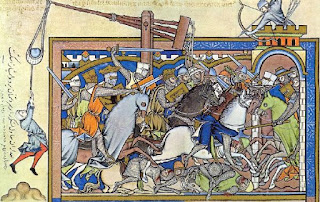 Before the days of modern ID cards, couriers who were carrying valuables or secret messages had to find a way to prove their own identity and that of the person to whom they were delivering the package. The simplest method was to a cut a coin in half, one being given to the recipient who would then match it to the courier’s. Rings were often use to identify the bearer or recipient, as well as passwords and coded gestures. Confidential documents could be concealed in the linings of clothes or laid flat on a wooden board and coated with a thick layer of wax, so that it would appear to be a cheap writing tablet. Not something a thief would bother stealing.

If messages fell into the wrong hands, the consequences could be disastrous. When Calais was being besieged by Edward III in 1346, the French defenders tried to send a letter to their king telling him they were so desperate they would have to start eating each other or surrender if help didn’t arrive. When one of couriers realised he had been spotted, he tied the letter he was carrying to an axe and threw it into the sea, hoping the axe would weigh it down, but it floated ashore and fell into the hands of Edward III who took great delight in personally sending it to the French king, just to add to his enemy’s humiliation.

Quite apart from the hazards of the journey itself, some couriers must have felt very apprehensive
about the reception they’d receive when they eventually arrived. The accepted laws of chivalry meant that a messenger delivering bad news should be allowed to speak freely without being punished, but men in authority were seldom noted for their sweet disposition and often the temptation to ‘hang the messenger’ proved too great.

In 1565, when a courier delivered the message to Suleiman that his siege of Malta had failed, Suleiman flew into a rage and stamped on the unfortunate man. But to be fair, when the Turks had earlier sent a messenger to Valette, Grand Master of the Knights of St. John on Malta, he had ordered the messenger hanged, and only relented when it was pointed out that the poor man was a slave who couldn’t disobey orders. So instead Valette sent him back with the message that he would hang anyone who came to deliver any further communications.

As for that package – I’m still waiting!
Posted by Karen Maitland at 00:30

Fascinating! Any idea how well or poorly medieval couriers were paid, or what their social status was like?


Makes me think of Rosencrantz and Guildenstern - less hesitation there...

Have you ever read Terry Pratchett's Going Postal? One if the characters is a golem who is thousands of years old. Nine thousand years ago, he was given a message to deliver which never reached its destination due to the forces of nature, but he's still carrying it...